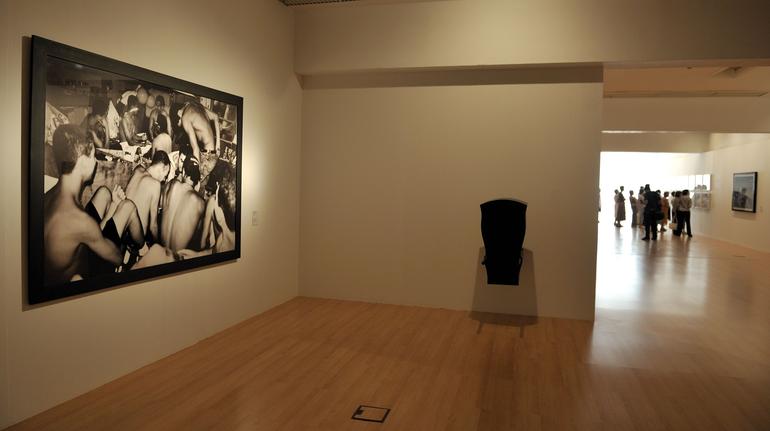 The Basque Government's Minister for Culture, Blanca Urgell, opened, this afternoon, this exhibition on the Way of St. James (Camino de Santiago) at the Artium Museum (Vitoria-Gasteiz).

From Friday 2 July to 12 September, the Este Alta room of the Atrium Museum is hosting the Ars Itineris exhibition: the journey in contemporary art. It is made up of 17 pieces by as many other artists that reveal different perspectives of travelling, from the life journey that is life itself to the symbolic journeys through memory, without overlooking, logically, journeys to foreign lands either for pleasure or obligation. The exhibition opened to the public on Friday 2 July and was officially opened by the Basque Government's Minister, Blanca Urgell. In this Xacobeo year (St. James Holy Year), the Basque Government is committed to showcasing the part of the Way of St. James that crosses the Basque Country, known as the Camino de la Costa (Coastal Way), which is used by numerous pilgrims on their way to Santiago de Compostela. The target set by the Government is to get the UNESCO to declare the Basque section of the Way of St. James as a World Heritage Site.

With its sights set on 2011, the year in which the Basque Government aims to get the UNESCO to catalogue the Camino de la Costa, which cross 85 Basque municipalities over 462 kilometres, as a World Heritage Site, the Ars Itineris: the journey in contemporary art exhibition opened its doors in Vitoria. This afternoon, the Minister for Culture, Blanca Urgell, officially opened this exhibition sponsored by the Basque Government and which will be at the Artium Museum (Vitoria) until 12 September. Throughout the year, the Basque Government's Ministry for Culture is also organising different cultural events, concerts, street theatre, exhibitions, etc, to showcase this part of the Way of St. James, which had been previously less well known than the traditional route. In total, there will be 37 activities in 22 municipalities of the three Basque provinces. The Minister stressed that the exhibition is "ambitious" given its motive and "important" for the quality of the artists that have contributed their works. The Basque Government's Ministry of Culture seeks to foster the Camino de la Costa as it is "an opportunity for social enrichment" as it is a first-rate European channel for cultural interchange. "There is History with a capital H along the route and also stories, cultural and linguistic realities, art, architecture, music, theatre, leisure and also local cuisine," she stressed. In short, an opportunity to enjoy the "humanity" along the whole of the Way of St. James, including the Basque section.
The Deputy Minister for Culture, Antonio Rivera, explained during a press conference held this morning and where the Artium Director, Daniel Castillejo, and the SECC Manager, Xoxe Garcia Candido, were also present, that all the events being held "from the Ibiladia to the PIN" h will be featured at a monographic exhibition at the Children's Christmas Fair (PIN). With regard to the goal of becoming a World Heritage Site, Rivera stressed that the Ministry of Culture "is doing its homework". Regarding the exhibition, that was opened by the Basque Government's Minister of Culture, Blanca Urgell, Rivera explained that it is going to bring the "artistic component" of the Way of St. James to Vitoria.

The common theme of this exhibition is the Way of St. James, which includes the Basque section along the coast that each year is used by increasingly more pilgrims on their way to the steps of the Cathedral of Santiago de Compostela. The exhibition is made up by 17 pieces by as many other artists that reveal different perspectives of the fact of travelling, from the life journey that is life itself to symbolic journeys through memory, without overlooking, logically, journeys to foreign lands either for pleasure or obligation.

Memory Clouds, a 6-metre long PVC cloud, filled with helium, with 4 USB sockets, 4 pen drives and different moorings, has been installed outside the Artium Museum. By means of a simple process, photographs, images and videos related to the Way of St. James can be "uploaded" to the cloud. Pilgrims will take the cloud in stages along the Way of St. James and at each stop, new photographs and the videos from other pilgrims will be able to be uploaded. There are 7 such clouds in other cities and they will be brought together at an exhibition in the square outside the cathedral of Santiago de Compostela from 22 July onwards.

Overall, "Ars Itineris" will feature two hundred works by a hundred or so international artists that delve into our concept of travelling and on the different forms that it can take according to the diversity of travellers, intervals and existing destinations. The artists showcased include Thomas Ruff, Ibon Aranberri, Bleda & Rosa, Sergio Belinchón, Olafur Eliasson, Joan Hernández Pijuan, Matt Mullican, Magdalena Correa, Richard Long, Francesc Torres or Sophie Wettnall.