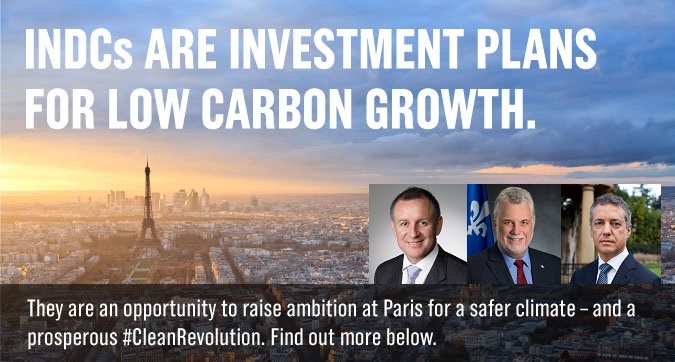 In an op-ed published in Project Syndicate following INDC submissions from the US and other leading economies, the co-chairs of our States & Regions Alliance - representing sub-national economies of North America, Australia and Europe: Philippe Couillard, Premier of Québec, Iñigo Urkullu, President of the Basque Country and Jay Weatherill, Premier of South Australia - call for greater climate action efforts from national governments.

A new global agreement to address climate change is taking shape, with the United   States joining the European Union in formally submitting its plan to cut greenhouse-gas (GHG) emissions to the United Nations Framework Convention on Climate Change (UNFCCC). The US has sent a strong signal by being one of the first to offer this commitment to concrete climate action. In the days ahead, many other countries, including China and India, are expected to add their plans to the mix.

Together, these plans (known as “intended nationally determined contributions,” or “INDCs”) will represent a collective global effort to invest in a prosperous, low-carbon future.

And we, as co-chairs of The Climate Group’s States & Regions Alliance, call on national government leaders to join that effort with ambitious climate plans. We make this call to our national leaders because we believe it is right, and because we know it is possible.

We believe it is right because, as the leaders of large state and regional governments, responsible for implementing our own climate plans, we have learned that addressing climate change is both a duty and an opportunity. It is a duty, because climate change now affects our everyday lives. And it is an opportunity, because promoting sustainable development creates new clean-technology jobs and more diversified, greener, and resilient economies.

We know it is possible because we are doing it. Each of our regions has reduced GHG emissions to 1990 levels or below; and, since we began, our economies have more than doubled in size. This has been achieved partly through the innovative policies adopted by our respective governments.

A carbon market covering 85% of GHG emissions is at the center of the Québec government’s strategy for fighting climate change. On January 1, 2014, Québec linked its carbon market with California’s, creating the largest regional carbon market in North America. All the revenues generated by the sale of Québec emission units go into the province’s Green Fund, and are reinvested in initiatives aimed at further reducing GHG emissions and helping Québec’s residents adapt to the effects of climate change. Québec will invest more than $3.3 billion toward this goal by 2020, contributing to the growth of its economy.

The Basque Country established a program called Local Agenda 21, designed to support the creation of local sustainability plans across the region. As a result of the program, almost all Basque municipalities have adopted such plans, consisting of more than 25,000 projects in areas such as mobility, waste management, and economic development. These local plans are now driving sustainable development in the region, with knowledge sharing among municipalities laying the foundation for further progress.

South Australia, meanwhile, has developed the most supportive regulatory framework for renewable energy investment in Australia, enabling an increase in renewables’ share in power generation from virtually zero in 2003 to almost 40% today. This shift is putting downward pressure on wholesale electricity prices and offsetting the cost of South Australia’s Renewable Energy Target in the short term, all to the benefit of consumers. This also positions South Australia as a leader in new energy industries. The state now accounts for more than 40% of the country’s operating capacity for wind-generated power, and has one of the world’s highest penetration rates for solar (one in four households has a photovoltaic system).

Now we are looking to the future. We have taken the lead, working to cut emissions by 20% by 2020 in the Basque Country and Québec, and by 60% by 2050 in South Australia – but we need partners at the national level. In our regions, businesses need consistent, long-term policy signals in order to make further investments toward a low-carbon economy. Working together, subnational and national governments can achieve much more than when working apart.

So, as we prepare for the UN Climate Change Conference in Paris in December, we encourage our national leaders not to waver. On the contrary, they should join us at the forefront of the fight against climate change by putting forward ambitious national plans that leverage the leadership of subnational governments to achieve the needed GHG emissions reductions.