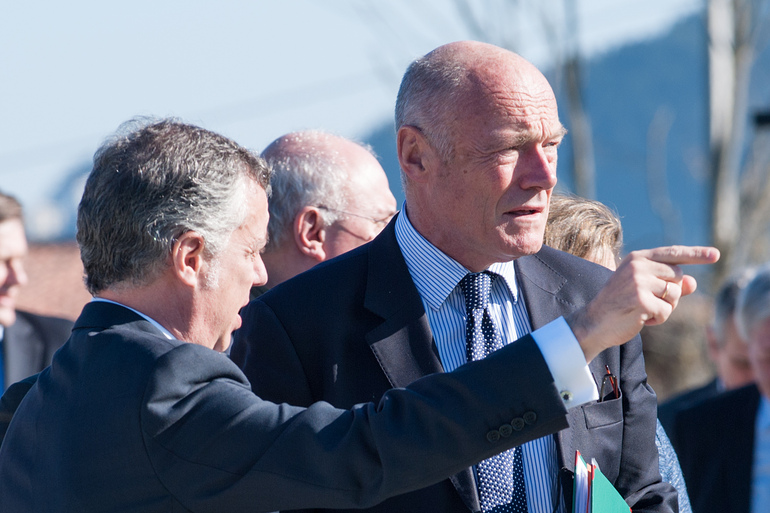 The Aquitaine-Basque Country Euroregion, currently chaired by Lehendakari Iñigo Urkullu, the Basque Premier, held its 2015 Assembly at the Madariaga Tower in Busturia this morning.

The Basque Government’s Minister for Education, Linguistic Policy and Culture, Cristina Uriarte, its Minister for the Environment and Territorial Policy, Ana Oregi, and its General Secretary for External Action, Marian Elorza, were among the people taking part at this meeting, headed by the Lehendakari and President Rousset. The representatives of the Aquitaine Regional Council included Vice-President Francois Maitia, its Transport Minister, Mathieu Bergé, and its Minister for Employment and Economic Development, Eric Guilloteau. The Euroregion Director, Marc Moulin, also took part.

During the meeting, the Lehendakari stressed the value of cross-border collaboration and the Basque Government's "commitment" to upholding this European cooperation "as shared strategy and inter-territorial cooperation multiples our opportunities for progress”. He thus pointed out the importance of common projects, as a tool to obtain European funds for development.

The Lehendakari also explained the importance of continuing with the high-speed rail project along the Atlantic corridor as a European strategic approach and he stressed that the Basque Government is continuing to work in that area, complying with the commitments undertaken. The Lehendakari called on the other stakeholders and institutions involved to maintain their commitments to this infrastructure as it is a strategic project not only for the Basque Country and Aquitaine, but also for Europe. President Rousset also reiterated his support for continuing with this project given its importance and its strategic and priority nature for Europe.

During this morning’s meeting, as Lehendakari Iñigo Urkullu reported, the Euroregion Assembly approved the 2014 activity report, which included the signing of the Health Memorandum of Understanding, the setting up of the Euroregional Campus of Excellence between the UPV and Bordeaux University, the extending of the Bayonne-Hendaye bus route to Irun, improving the TER-Topo train connection with the new intermodal signalling system at Hendaye station, or the submission of the project to foster the mobility of the cross-border workers of the Euro-region to the AECT Platform of the European Committee of the Regions.

The Assembly also approved the 2015 Plan of Action based on the Euroregion Strategic Plan 2014-2020 approved in Hendaye last December. The plan of action envisages four core areas and 40 specific actions for interterritorial cooperation:

Some of the actions envisaged for 2015 are: