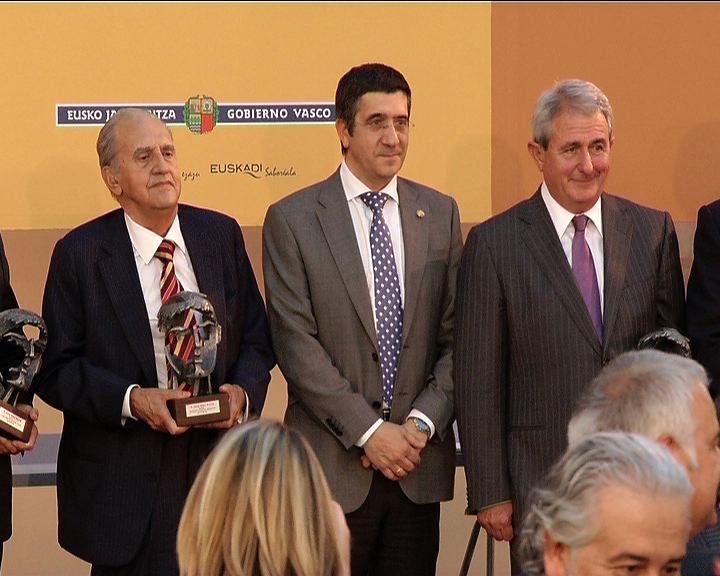 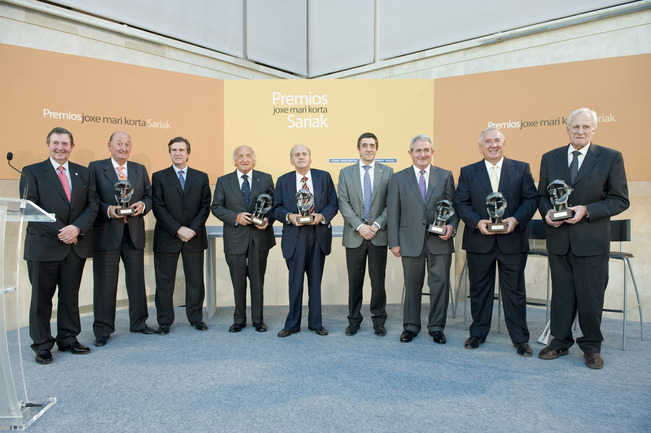 The Basque business community turned out in force for the tenth award ceremony in tribute to Joxe Mari Korta, murdered by ETA in 2000.

This afternoon, Lehendakari Patxi López, the Basque Premier presided the X Korta Awards ceremony. The event, held at the Lehendakaritza (the seat of the Basque Premier) in the presence of a wide cross-section of the business community, institutions and Basque society, recognised the lifetime achievements of six entrepreneurs. The winners of this year's awards are Pedro José Ruiz de Apodaka, Félix Quintana (both proposed by SEA-Empresarios Alaveses), Jaime Caballero and José María Echarri (both from Gipuzkoa and nominated by Adegi) and Juan José Aurtenetxea and Amancio Grijelmo (from Bizkaia and proposed by Cebek).

The Lehendakari, Patxi López, urged the award winners to keep "alive" the path embarked upon by Joxe Mari Korta to ensure we are "worthy heirs" of the entrepreneurs murdered by ETA. The Lehendakari went on to describe Korta as being dedicated to "freedom, perseverance and work well done," and pointed out to the 6 award-winning businessmen that "they are not alone, that we are with them and with the country as a whole in our daily endeavour to achieve a better society". The Lehendakari stressed that terrorism never "prevented Joxe Mari Korta from speaking out and it is not going to stop us from doing so". According to López, Joxe Mari Korta was noted for "his defence of freedom, his fierce belief in democratic principles, his courage and his commitment to the country". The outcome is that Basque society feels "truly orphaned" by the loss of the murdered businessman. "Continuing along the path that he blazed will send a "no" to ETA. An overwhelming "no", with no going backwards. A definite "no". And a huge "yes" to progress. And with that "no" and with that "yes", we will continue to work tenaciously and convincingly, with enthusiasm and commitment. As he would have done," he stressed.
On an economic note, López pointed out that despite the cuts that the Basque Government has been forced to adopt due to the financial crisis, those measures will enable us to "emerge stronger from the crisis". "It has been hard and difficult. Nobody likes to adopt measures of this type, but we are proud to see that we are not alone in this process," stressed the Lehendakari who highlighted the "responsible approach" that "authorities, the business community and workers" had assumed towards the situation.

"They are the visible face behind which there are many invisible faces that are fundamental for the Basque Country to progress. Today more than ever, during this period of crisis, we need people like you.

The Lehendakari reiterated that "we are in a better position than a year ago", but that "it is not time to let down our guard, but rather we need to continue working in the same direction, knowing that today's endeavours and sacrifices are the guarantee for sustainability of our future and present well-being". Lopez stressed that "we can only take on this challenge from a model based on solidarity, competitiveness and sustainability".

Born 64 years ago in Vitoria-Gasteiz and after completing his schooling at the Marianistas school, he moved to Madrid for his university studies. In 1968, he returned and began working in the company belonging to his father, Construcciones Hilario Ruiz de Apodaca, which developed and built housing.

In 1976, the family set up Aldape S.A. During these 40 years spent exclusively in the construction sector, Pedro José has been involved in building over 1,600 dwellings in Vitoria during the three generations of the Ruiz de Apodaka clan that have and currently make up Aldape.

As a good innovator, this businessman from Alava has always sought new trends. Proof of which was his early adoption of the family protocol and his bringing it in line with the different certifications. An earnest desire for work well done, commitment to meeting deadlines and the care taken with each project built by the company are among the values that he has transmitted to his workforce. And above all, the maxim "not to become blinded by excessive ambition". Two of his daughters are now working for Aldape.

Born 72 years ago in Vitoria-Gasteiz and, after learning how to sail and studying administration, he started working in Éibar, in companies such as Forjas Macharia and Felipe Tellería, where he held his first managerial posts. One year later his life took an important turn, when he joined Helmus Electrónica as a manager, until he changed sectors and became commercial director of Acerías and Forjas de Azkoitia.

After gaining wide experience in different sectors, he became a partner in 1973 of a company that he had regularly visited over the years: Tauxme, located in Nanclares and which manufactures metal structures. This company was founded by two twin brothers in 1965. He managed the company with them until 1992, when he took over the helm alone.

It was not easy, but Tauxme is present on four continents and currently employs nearly 100 people. This company in Vitoria is behind key works, such as the second largest copper mine in the world in Cananea (Mexico), numerous steelworks worldwide, such as the first ones to be built in Morocco and in Algeria, and the new Caja Vital building.
Félix Quintana is committed to applying at all levels "a respectful policy, where if you start working at Tauxme, you will retire there," claims the businessman.

Born in Tolosa 67 years ago into a family that had been working in the paper-making industry for four generations, he completed his schooling at the Jesuítas de Tudela School and then studied Law at Valladolid University.

He first joined the Administration Department at Papelera del Oria S.A.. He was first the legal representative, before assuming a managerial role, at a time when the company was going through at a difficult time, as it had just come out of Chapter 11 and had to fulfil the agreement with its creditors.

After 24 years managing Papelera del Oria, he retired last 31 December, leaving the company totally consolidated. His son is now carrying on his legacy.

He was born in Donostia-San Sebastián 75 years ago. After graduating with a Diploma in Management from the San Sebastián School of Commerce and as an economist from the Bilbao School of Management Studies, José María Echarri has had a far-reaching career. He began working for the Delegation of Labour Mutual Societies (Delegación de Mutualidades Laborales) in 1953, before joining a moulding company, Letaman.

For 20 years, he belonged to the Norwegian family-run multinational, O. Mustad y Cía. He moved from the manufacturing and machining sector to that of PVC textile coatings and accessories, in Sommer Allibert España, between 1982 and 92. He was the Deputy Chairman and Managing Director of various companies in the group.

The next stage of José María Echarri's career was in the cement, concrete and aggregates, at Sociedad Financiera y Minera S.A., the parent company of Cementos Rezola. He was the Chairman and managing director. He then went on to become the managing director of Pakea, Social Security Friendly Society for Occupational Accidents and Professional Diseases.

Echarri has never rested on his laurels and held many different posts: Chairman of the Orfeón Donostiarra choir, Norwegian consul in San Sebastián, Chairman of the Inasmet Foundation Board and Chairman of Corporación Tecnalia, as well as being Deputy Chairman of Mutualia. He was also chairman of the Guipuzcoano bank and of the Gipuzkoa Chamber of Commerce, Industry and Navigation for two legislatures, 2002-2006 and 2006-2010.

Born in Bilbao 71 years ago, he studied at the Santiago Apóstol school and then went on to study accounting and business at the Bilbao School of Commerce. When he was 18 years old, he joined Central de Maquinaria & Herramientas, a well-known warehouse where he learnt about machinery, tools, accessories and industrial utensils.

However, he was always driven by the desire to form his own company. While he was still at the company, he worked on a project that crystallised into a patent for the ship-building industry and founded Electro-Navales R.Y.A, which manufactured and sold watertight electrical equipment for ships. But he would not embark on his lifetime project until 1963.
He set up Suministros Aurtenetxea, dedicated to the integral supply of machinery, tools, accessories, utensils, etc. for industry in general, the automotive industry, civil construction and public works. It had an industrial ironmongers with warehouses and offices, while the retail outlet served the general public.

It was hit by the flooding of Bilabo in 1983, when the company was moved to Calle Begoñalde in the city, where he oversaw two stages: An initial stage of new growth and the other with the arrival of the crisis in the early 1990s. During that period, he decided to move the company to an industrial warehouse in Sondika. Aurtenetxea survived the crisis and was in the strongest position to embark on a modernisation stage.

The company is now considered the most important construction and industrial supplier in Vizcaya. It was the first in the sector to be awarded the ISO 9001 quality standard and it was also the first to do so simultaneously with other environmental and prevention of occupational risk certificates.
In 1986, the entrepreneur also founded Aurtenetxea Containers, S.A, located in Campa de Erandio and which rented and sold maritime containers. He also founded Sendeja, S.A. to manage the property used by companies within and outside the group.

Born in Bilbao 82 years ago. He studied at Santiago Apóstol school. He got the equivalent of a Degree in Business at the Bilbao Business School, and completed his academic education with practical training and studies in graphic arts at Madrid, Barcelona, Paris and Freiburg (Germany).

As was expected of him, he began to work at the family company Artes Gráficas Grijelmo in1952. The company had been founded in 1890 by his grandfather, Frederico Grijelmo, who produced a range of important publications in Bilbao. Amanico Grijelmo and his brothers were the third generation of the family to join the company.

Over the years, he held different directorship at the printers. Artes Gráficas Grijelmo became the leading graphic arts company in the Basque Country and one of the largest in Spain, as it employed over 500 people.

Grijelmo is the honorary chairman of the Bizkaia Graphic Arts Association, of which he has been a member for 54 years. He was also deputy chairman of the National Graphic Arts Federation. He has also been involved in setting up companies linked to the graphic arts. The Grijelmo family founded Tintas Prisa and helped to set up Disma, the largest paper warehouse in the Basque Country.

He was also involved in founding publishing houses, including Ediciones Deusto, Durvan, Urmo, Neguri, Cantabria and IBC. In the photomechanics sector, he founded Didot and the two companies where he currently works, whenever his health permits him, Datacolor and Computer to Plate. Until last year when he was 81 years old, Amanico went to his companies every day.

The jury highlighted all their involvement in the business sectors where they have worked, together with their important role in developing business values, creating companies, generating new activities and jobs, along with their personal contribution, in each case, in some of the fields of innovation, production, construction, metallic structures, graphic arts or industrial supplies.