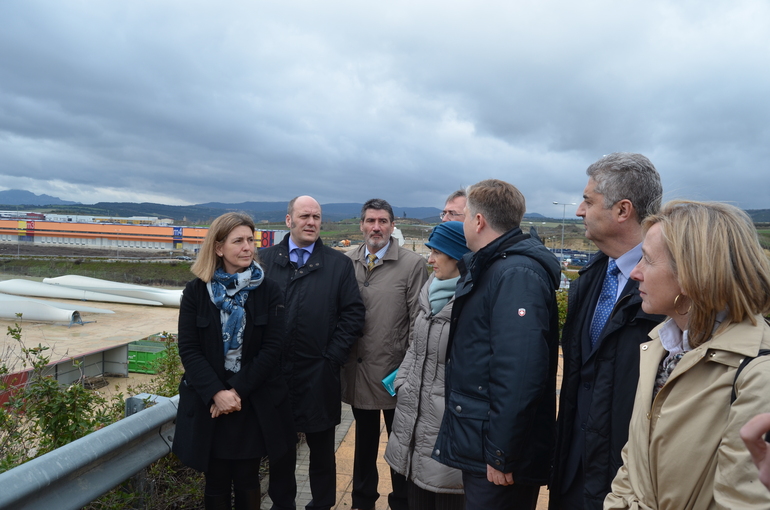 Download photo
Embed image
Download photo set (zip)
Work on the Port of Bilbao freight siding on the Arasur Logistics Platform is due to commence this year Source: Irekia

Work is to begin this year on the Arasur logistics platform in Rivabellosa, Álava, to install a rail operations base for the Port of Bilbao, in accordance with an agreement signed by Ana Oregi from the Basque Government, José Zurita from the Provincial Council of Araba/Álava and Asier Atutxa, President of Bilbao Port Authority.

Bilbao Port Authority will contract out and manage the work, which is expected to cost a total of eight million three hundred thousand euros according to the agreement. The Basque Government will cover just over 36 percent of the cost (€3 million). This will be matched by Bilbao Port Authority, while Araba/Álava Provincial Council will provide the remaining €2.3 million.

According to Ana Oregi, the Basque Minister for Environment and Regional Policy, “Arasur has an enviable geographical location, plus rail and road links with Paris, Madrid and Barcelona, air freight operations at Vitoria-Foronda Airport and it is also close to Bilbao, one of the busiest ports in Atlantic Europe”.

Oregi reminded the audience that “Arasur is at one of the epicentres of the nine large transport corridors which will together form the main transport network for the European Union single market that runs from north to south and east to west, sitting at a crossroads between the Atlantic Corridor and the Atlantic-Mediterranean. We need to know how to take advantage of our position in the new central transport network that will be under development between now and 2030 - a network that includes 94 large European ports connected by rail and road, 38 airports with rail connections to major cities, 15,000 km of railway lines designed to accommodate high-speed trains and 35 large cross-border projects”. In order to optimise these resources, Oregi believes that it is “absolutely essential for a border inspection post and 24-hour service to be reinstated at Vitoria-Foronda Airport”.

Asier Atutxa, the President of Bilbao Port Authority, claims that “this new rail-port connection brings together the country's interests in that it presents a strategic oppotunity for the Arasur logistics platform, giving it a new lease of life through its operational connection with the Port of Bilbao. It also promotes connections with the main logistics hubs and transport infrastructure of the Basque Country, increasing the employment rate and wealth for both the local economy and that of the Basque Country in general”.

“On the other hand," remarked Atutxa, "through its capacity as an intermodal freight transfer hub, the Port of Bilbao will also benefit from being part of a strategic logistics platform. This will help to capture or strengthen the amount of port traffic, significantly enhancing the competitiveness of the dock”.

Meanwhile, Luis Viana, President of the Board of Directors at Araba Logística (Arasur) and second Vice-President of Kutxabank – the majority stakeholder in the company's share capital along with the Catalan company Saba Parques Logísticos – provided attendees with a glimpse into the new location of the dry port and the sevices offered by the platform. Viana reiterated that the rail project has the backing of Europe due to it being part of the Atlantic Axis, and congratulated “the Port and its institutions” on their initiative, claiming that their actions “will boost employment and revitalise the Basque economy, as well as strengthen important logistics infrastructure in Álava such as Arasur”.

The agreement was signed on the Arasur site and the event was attended by the company president and signatories, as well as the Basque Deputy Minister for Transport, Antonio Aiz; the Managing Director of Investees and Project Funding at Kutxabank, Alicia Vivanco; the Managing Director of Saba Parques Logísticos, Josep Oriol; the Mayor of Rivabellosa, Pedro Montoya, and the Commercial Director of Arasur, Asier Axpe, plus other institutional representatives, shareholders and members of the board of directors.

The work which is to go ahead on the platform will initially occupy around 35,000 square metres alongside the Irún-Madrid tracks and involves expanding and improving operations at the Arasur logistics platform. This will be achieved by implementing a freight siding with a rail connection to the industrial estate and setting up the sidings so that they are consistent with the type and volume of freight handled by the Port of Bilbao. The additional land required for the adjacent development will be purchased at a later stage, with the facilities expected to take up an area of approximately 69,000 square metres.

In 2013, the Basque Government and Provincial Council declared their commitment to taking steps to revitalise the economy and boost investment in Araba/Álava, and these included the Arasur freight siding. The logistics platform was launched in 2006 in the Ribera Baja area of Álava. It represents a strategic geographical point in terms of transport infrastructure as it is located next to roads such as the A1, AP1, AP68 and European route E5, the Madrid/Irún/Paris railway, Vitoria-Foronda Airport, as well as being near the Port of Bilbao.

The new facilities mean that Araba/Álava and the Basque Country as a whole are in line with the development of the European Union, taking advantage of their exceptional geographical location, the intermodal transport on offer and their highly competitive logistics platforms.