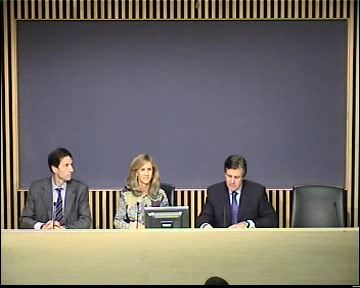 The Minister of the Spanish Government, Cristina Garmendia and the Regional Minister, Bernabe Unda, have presented the contents of three new agreements

EVE and CIEMAT establish a collaboration framework which will take the form of an initial R&D project for storing energy, in which CIC energiGUNE is included

The governments of Spain and the Basque Country today presented three agreements signed with the aim of collaborating in technological projects of mutual interest in the field of energy and innovation. The press conference was attended by the Minister of Science and Innovation, Cristina Garmendia, and the Regional Minister of Industry, Innovation, Commerce and Tourism, Bernabe Unda, who explain the contents of the three agreements: one, between the Energy, Environmental and Technological Research Centre (CIEMAT) and the Basque Energy Board (EVE); another between the CIEMAT and the Co-operative Research Centre -CIC energiGUNE; and a third agreement between the Ministry and the Basque Institute of Finance to develop the scientific-technical infrastructures of the Technology Parks Network and to foster innovation in leading companies.

The accord reached by EVE and CIEMAT represents a framework collaboration agreement and outlines the interest of both parties in establishing a legal framework of collaboration in projects of mutual interest. The agreement sets out its specific terms and the sectors and areas in which the projects are to be developed jointly. Specifically, a series of energy-related areas are identified as priority concerns for the promotion of collaboration projects.

These priority areas are as follows:

CIEMAT is a public research entity of the State Government, belonging to the Ministry of Science and Innovation, which carries out research and technological development projects in energy and environmental matters, as well as in many avant-garde technologies and in several areas of basic research. CIEMAT has a workforce of approximately 1200 people, of which 47% are university graduates.

As a direct consequence of this general framework agreement, a specific agreement has been signed by the CIEMAT and CIC energiGUNE. This agreement establishes the bases on which the collaboration between CIEMAT and CIC energiGUNE are to be governed in the realisation of research projects in the area of energy storage, specifically in electrochemical devices, high temperature thermal energy and by means of thermochemical cycles, as well as the training of researchers. The basic contents of the research to be carried out will be to develop products and concepts applicable in the medium to long term to the energy storage market.

CIC energiGUNE, based on the Alava Technology Park, is one of the most ambitious projects within the framework of efforts undertaken by the Basque Government to reinforce R&D in the field of energy. The centre is mainly engaged in research into energy storage techniques for both electricity (batteries, supercapacitators and other devices) and heat (molten salts, status changing materials). CIC energiGUNE is a foundation whose basic aim is to generate scientific and technological know-how in the area of chemical and physical sciences and energy-related materials. Its board of trustees is made up of public and private entities (government bodies, companies, research centres, etc.) based in the Basque Country, who contribute to the project an element of soundness, overall vision and approximation to the real needs of the energy sector.

The signing of these agreements can be seen within the framework of other measures being taken by the Department of Industry, Innovation, Commerce and Tourism of the Basque Country to promote the energy sector as one of the priorities areas of the government in its policy of technological and industrial development. In this sense, as an energy agency of the Department, EVE is responsible for promoting projects, alliances and collaboration agreements in its particular field of activity.