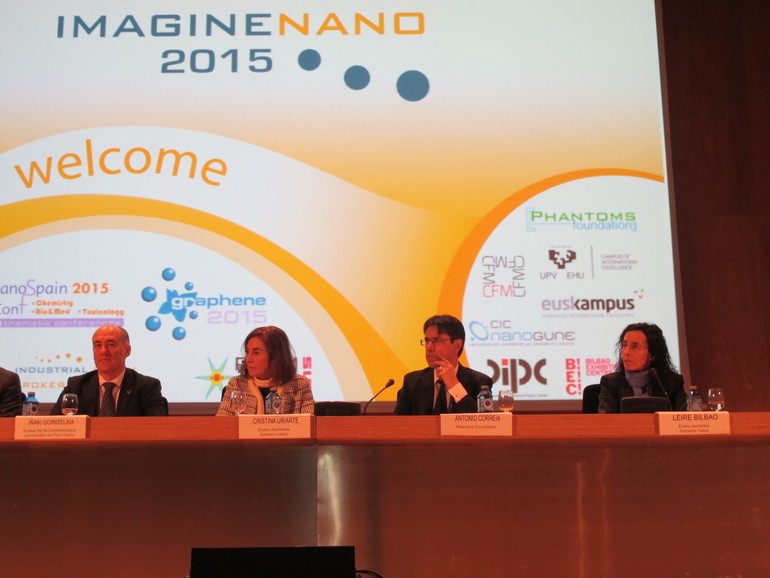 “The Basque Government is giving a strong impetus aimed at helping the industrial fabric to apply these technologies. Since 2008, the companies and spinoffs have tripled" in the emerging sector of nanotechnology, Leire Bilbao, the Basque Government's Director of Technology and Strategy, stressed this Tuesday. She was speaking at the opening of Imaginenano 2015, one of the largest European events in the sphere of nanosciences and nanotechnologies. It is being held at the Bilbao Exhitibion Centre (BEC) in Barakaldo until Friday 13 March and over 1,000 visitors are expected.

The Director of Technology described this sector as an “emerging field”, that has the backing of the authorities and of the technology centres. “It is a good thing that the Basque Country is driving R&D&I in this field and this will help us enter markets,” pointed Leire Bilbao during the presentation of  the event to the Press.

Antonio Correia, Chair of the Phantoms Foundation, the fair's organiser, welcomed the commitment in the Basque Country to nanotechnology, “with cutting-edge centres that work very well”, but regretted the lack of impetus in the rest of the Spanish State. “NanoSpain is better known outside Spain than here.” Correia also complained about how difficult it was for Spanish researchers to attend this type of event. “The economic crisis continues to affect research”. Despite this, he welcome the fact that over 1,000 visitors would be at Imaginenano, which will run until Friday and during which over 100 speakers will cover the so-called nano universe: Grapheme, biotechnology, photonics, optics, chemistry.

The Fair has over 100 stands and an industrial forum has been organised to present the most innovative technologies, exchange knowledge and contact potential partners for R&D projects. A brokerage event has also been organised to help bring together technology developers and users.

The Basque Country is hosting Imaginenano, a fair that is held every two years, for the third consecutive time, after the success of the 2011 and 2013 events. It confirms the Basque Government’s strategic commitment to firmly positioning the Basque Country on the global map of nanosciences and nanotechnologies. A commitment that started back in 2008 with the defining of the nanoBasque Strategy whose main objective is business development by means of incorporating micro- and nanotechnologies in practically all the industrial sectors of the Basque Country.

Micro- and nanotechnologies have been identified as facilitating technologies in the Euskadi RIS3 smart specialisation strategy and there are already over 200 Basque companies that incorporate these technologies in their products/processes to a greater or lesser extent.

A 175-m² pavilion, coordinated by the nanoBasque Agency, is the venue in a strategic location for Basque companies and stakeholders working in the fields of nanosciences and micro-and nanotechnologies to exhibit their highly innovative projects and products aimed for high-tech markets.

Seven Basque companies along with the Technology Development and Research Centres (CIC nanogune, CIC microgune, CIC biomagune, CIC energigune, Tecnalia, IK4, DIPC and CFM) will be there as exhibitors of their products and technologies.

Thus, Graphenea is showcasing its range of high-quality graphene that it already sells to Nokia, Philips, Nissan, Canon and other leading multinationals in over 40 countries. C-technano and Simune, CIC nanoGUNE spin-offs, are exhibiting their nanotechnology coating solutions and their atomic simulation services, respectively.  Praxis Pharmaceutical, a company that develops, third-party manufactures and markets pharmaceutical products specialised in the treatment of low-incidence orphan indicators will unveil its latest developments in nanodrugs. Sensia, the Basque technology leaders in the sphere of analytical instrumentation based on SPR (surface plasmon references), for environmental measurements and life-science laboratories, is presenting the first graphene biosensors used to obtain extreme sensitivities on the SPR market.

Sisteplant, an industrial engineering services company, is showcasing its activity services for companies to incorporate nanotechnologies in their production processes and, finally, the most recent of them, Nanoinmag is exhibiting its future production of magnetic, polymeric and inorganic nanoparticles to be used in different industrial sectors including the automotive industry, energy, machine tools, construction, etc.