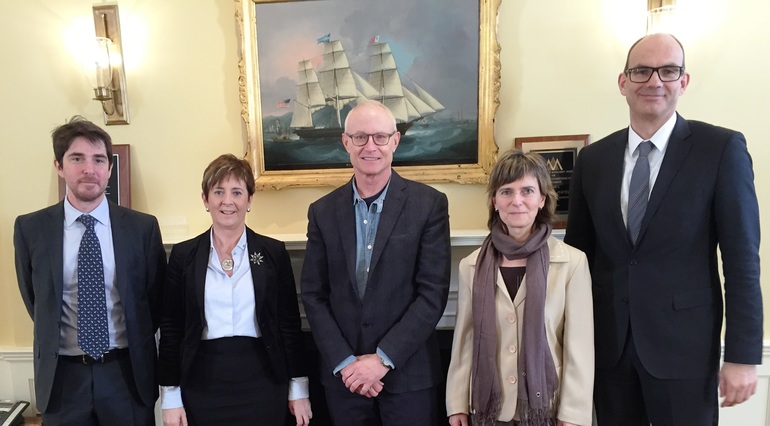 Arantxa Tapia outlined aspects of the Basque system at the Institute for Strategy and Competitiveness, after meeting with Michael Porter

The Basque Government’s Minister for Economic Development and Competitiveness, Arantxa Tapia, will return tomorrow from the United States, which she is visiting to present the Basque Case on the Microeconomics of Competitiveness (MOC) course at Harvard University, co-organised with Orkestra-Basque Institute for Competitiveness and attended by 40 students of different nationalities.

The course is run at the Harvard Institute for Strategy and Competitiveness and is headed by Professor Michael Porter, who met with the Minister beforehand to discuss the current situation of the Basque Country from the perspective of its competitiveness.

Coincidentally, the material of the Basque Casehas now been officially recognised as a subject, which means there will be even greater interest among students than up to now.

Precisely, its official nature has allowed Harvard University to produce study material including some multimedia explanations recording by the Minister yesterday morning.

“The content that we contribute to the Basque Case or Model in the course is natural and normal for Basque society, but the students are surprised to discover that a country of our size has managed to set up such a far-reaching  financial-economic system and a competitiveness model that,” pointed out Tapia to end the class.

The session was led by Professor Christian Ketels, who is, furthermore, chair of the Orkestra Advisory Board. Mari Jose Aranguren, the General Manager of Orkestra, the institutions that runs the  MOC in the BAC, accompanied Arantxa Tapia on this trip, which also envisaged visiting and consolidating ties with other institutions and universities.