An EC report highlights the importance of the Basque Country’s metal sector, the third largest European region in the machine tool industry 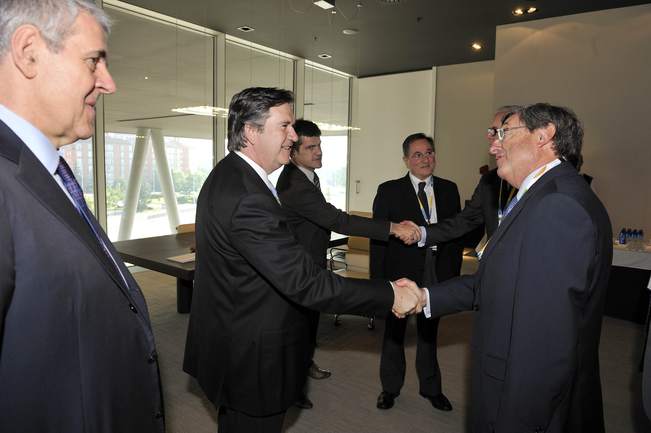 Bernabé Unda inaugurates the first Seminar on the metal industry ever held in Europe, with the participation of experts from a number of different countries

The European metal sector comprises 400,000 companies and provides jobs for more than 4 million people. The Seminar concluded with a proposal to apply a number of new strategic lines.

Due to its leading position in the machine-tool industry and the large number of companies of which it is made up (steel, foundries, forges, automotive, naval, energy, etc.), as well as the large number of jobs it generates, the Basque Country is one of the most important regions in the European metal sector. These are the conclusions of a European commission report announced today at the Bilbao Exhibition Centre in Barakaldo. The report, presented in the form of a synopsis entitled "A look at the invisible sector", provides a picture of the situation of the entire sector in the European Union.

The European Commission (EC) chose the Basque Country as the ideal place to hold the first European Seminar on the Metal Industry. During the session, 100 specialists from the European Commission and from a number of different regions of the EU, including the Basque Country, representing a number of different fields (industry, federations, banking, institutions and trade unions), discussed the report prepared by the EC. The Basque Country metal sector was presented as an example of good operation. As a result, several speakers representing Basque institutions and companies have been invited to a roundtable in order to set out the reasons for the success of this sector in the Basque Country. Representatives of several of the most important European countries in this area took part in the Seminar.

The session began with the presentation of the report prepared by the European Commission. The 266-page report sets out an in-depth analysis of the jobs generated in the European metal sector, its productivity, the structure of its companies, distributors, the competitiveness of the sector, as well as a number of other fundamental aspects.

One of the main conclusions of the document points out that the European metal industry is virtually unknown in Europe (hence its title "A look at the invisible sector"), in spite of the fact that it is made up of industries with a presence in most European cities and regions. It is a major driving force behind their economy and one of the top generators of employment. Indeed, it employs more than 4 million workers. The sector consists mainly of SMEs and contains more than 400,000 metallurgy companies. With the exception of the building industry, no other manufacturing or engineering sector has a larger number of companies.

According to the report, the Basque Country is the third largest European region in the machine tool sector, with a great deal of experience, a very competitive position, high levels of flexibility and adaptation to change and with major technology centres. On the other hand, its weaknesses include the size of its companies and there is a possible threat from countries with low production costs.

It also highlights the importance of the support from Basque public institutions. In his inaugural address, the Minister, Bernabe Unda, emphasised that the metal sector will continue to receive the backing of the Basque Government. This will include initiatives such as the 10 million euros allocated to the 'Renove plan' for the machine tool industry, presented on May 31 at the biennial trade fair, and continued support for traditional internationalisation programmes. Likewise, the 2010-2013 Competitiveness Plan, to be presented in July, will foster innovation, competitiveness and the internationalisation of Basque companies. The minister drew attention to an interesting statistic: "The metal sector accounts for more than 60% of the Basque working population".

The seminar was chaired by Alexandra Tour-Schroeder, Unit Head of the General Companies and Industries Directorate of the European Union, responsible for presenting the final conclusions of the Seminar. Two roundtables were organised during the seminar. Participants included a number of guests from the most heavily industrialised European countries and regions (Italy, Germany, Belgium, Poland, France, etc.), with representatives from the government, associations, federations and sector groups.