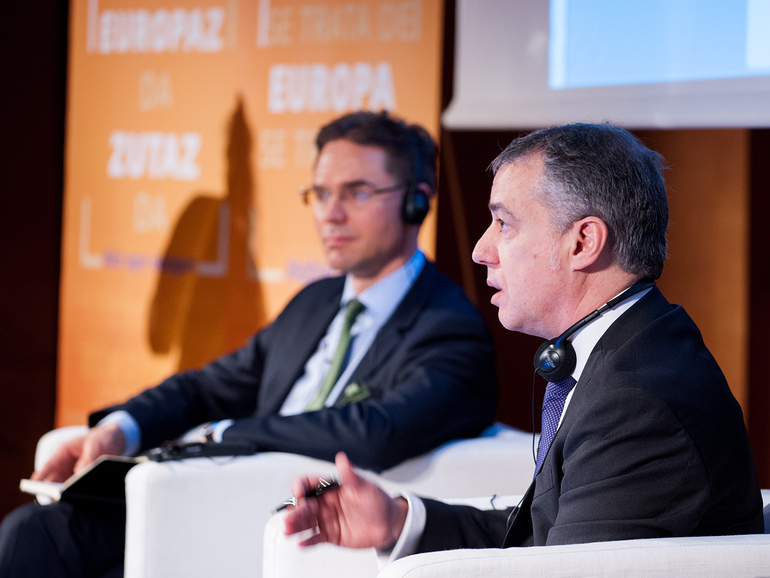 European Vice-President is visiting the Basque Country to present the EU Investment Plan announced last November with the aim of driving growth and employment in Europe – also known as the Juncker Plan – that intends to mobilise a total of 315,000 million euros.

Citizen Dialogues are discussion forums organised by the European Commission where the general public have the opportunity to put their questions and opinions to political representatives about the policies implemented by European institutions. Over 200 people – mainly students and representatives of civil society and the world of finances - took part in the forum held at the Euskalduna Conference Centre this morning.

During one of his interventions, the Lehendakari thanked the European Commission for choosing the Basque Country to host this forum and he stressed the Basque institutions’ commitment to the European project, “as we believe,” he said, “in the Europe of the People, in subsidiarity and in bottom up construction".

People can wait no longer

The Lehendakari stressed that “the Basque Country is ready to receive funds and put them to work right from the start”, given that he is convinced that the entrepreneurs, companies, investments and industrial projects can wait no longer.

Regarding the current economic situation, Iñigo Urkullu indicated that the GDP had grown by 1.2% in the Basque Country, and that there now have been six quarters of growth after two years of recession. Net employment has also been created for the first time from the start of the crisis.

“We are turning around, just when things are beginning to look brighter and we have to pull together. Therefore, we welcome the stimulus policies and the European Fund for Strategic Investments," he pointed out.

The Lehendakari advocated for moving once and for all from cuts and austerity to kick starting the economy and jobs, ensuring dignity and quality of life and opportunities for everyone.  He also stressed that the Basque Country also has its own Juncker Plan, which is based on the Agreement for Employment and Economic Reactivation until 2016 for which 6,475 million euros have been earmarked.

At another point of the forum, Iñigo Urkullu indicated that the Basque Country expects a Europe focused on stimulus policies for the real economy and policies to support SMEs and entrepreneurship, that prioritises youth policies, and backs a specific revitalisation plan for the European Atlantic Corridor that envisages investments in the railways network, trams and the Basque Y high speed train, the regeneration of urban zones, energy generation projects, the Advanced Manufacturing Centre for the wind power sector and investment hospitals.

The Lehendakari ended by indicating that the Citizen Dialogue forum held in Bilbao had served to know Europe a "little better" and stressed that the nation-building project that the Basque Country advocates is part of Europe and needs the stimulus, support and funding of European institutions.