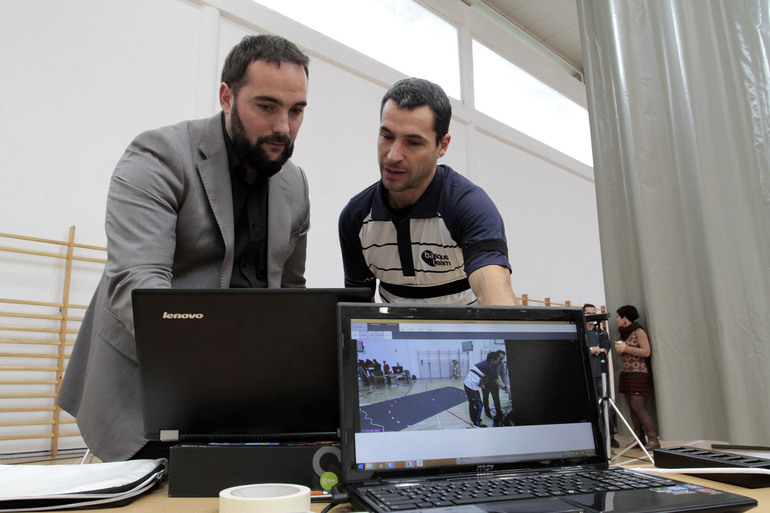 The video of the presentation is already available through the following link:

New technologies have come to the rescue of traditional sports and games, an aspect of European cultural heritage, some of which are at risk of disappearing. And the Basques and Irish, two of the peoples of Europe where traditional sports such as Basque pelota or hurling still have a strong following, are at the forefront of the RePlay project, a new initiative of cooperation between science, sport and culture.

The Basque Government’s Sport Director, Jon Redondo, and the project coordinator at Vicomtech-IK4, the Basque R&D centre, María Teresa Linaza, were tasked with presenting the initiative this morning at the Fadura High Performance Centre in Getxo (Bizkaia).

RePlay aims to launch a digital platform based on 3-D image and motion capture technologies, which will enable new ways of teaching and showcasing traditional sports, along with studying playing techniques and styles and improving the training techniques of the participants.

The project got underway in 2103, focusing on highly popular activities in their countries of origin, such as Basque pelota in the Basque Country and hurling or Gaelic football in Ireland. The digitalisation of the typical techniques and skills of those sports can be extended to a wide variety of traditionally sports played with a ball, either propelled by hand or foot or using a means such as rackets, sticks, bats, baskets, etc. In fact, the RePlay advisory committee includes sport federations such as Italian tamburello, the French jeu de paume or the Valencian pelota federations, along with the Basque Pelota World Council.

Cameras and sensors attached to the body

Using special cameras and highly accurate motion sensors attached to the athletes’ body, the movement of pelotaris and hurling (similar to hockey and played with sticks called hurley, and whose female version is known as camogie) and Gaelic football (when the ball can be passed by hand) players was scanned and recorded to develop an initial prototype, which was unveiled this morning in Fadura.

It is a low-cost 3-D software platform, which allows the styles and techniques of the movements associated to each sport to be studied in order to understand, preserve, protect and promote European traditional deports. The procedure includes capturing, recording and indexing 3-D images, analysing methods and projecting results to other sports. RePlay can also be used to scientifically compare and analyse the evolution in the changes in the playing styles or carry out retrospective analysis using video contents.

The philosophy of the project – involving six other partners from Ireland, the United Kingdom, Greece and Switzerland, alongside the Basque Government and Vicomtech-IK4– is based on  traditional sports and games being considered as a part of the European intangible heritage. There are over 3,000 in Europe alone, many of which are in decline or in the throes of disappearing. RePlay will make high-quality recording of some of those sports available not only to sport organisations, but also to museum and other cultural institutions such as Europeana, the European digital library that is home to a cultural heritage of digital items from 2,300 EU libraries, archives and museums.

RePlay – whose budget allocation is two million euros subsidised by the Seventh Framework Programme up until 2016 - is an unprecedented partnership between the scientific community, sport entities, cultural organisation and the athletes themselves.

During the coming days, over a hundred trainers, amateur athletes and schoolchildren will try out the different types of Basque pelota on the Fadura pelota courts to test the prototype that has been unveiled today. The athletes will test their skills using different low-cost devices and sensors attached to their joints, capable of capturing the movement of the whole body in 3-D.

These recording will be compared to the “ideal movement” of a Basque Pelota player, a model obtained in Oxford (England) last October with the help of the Pelota Basket world champion, Mikel Egiguren, the Pelota hand player, Mikel González, and of the Pelota bat players, Laura Sáez and Jon Arriaga. The answers and comments from those first users of the system will provide valuable information to fine tune the system before its final launch, planned for next year.

The project consortium is made up of eight participants from five European countries, including the Sport Directorate of the Basque Government. The following partners are also involved:

- Vicomtech-IK4 is an applied research centre specialising in Computer Graphics and Multimedia technologies based at Miramón de San Sebastián Technology Park. It is a non-profit foundation set up in 2011 as a joint venture between INI-GraphicsNet Foundation and EiTB, the Basque broadcasting group.

- Clarity is a research centre that focuses on the intersection between two research areas, adaptive sensors and information discovery. Clarity develops new technologies to improve the quality of life in areas such as health, environmental management and digital contents.

- MIRALab University of Geneva was founded in Geneva (Switzerland) in 1989 by Professor Nadia Magnenat-Thalmann, who currently heads the centre. The MIRALab researchers focus on aspects related to people and virtual worlds, mixed reality and multimedia technologies. One main objective of the centre is multidisciplinary work (computer sciences and electrical engineering, medicine, physics and mathematics, networks and multimedia, architecture and design, psychology) and fostering that share work to understand people's different capacities and stimulate them in a realistic way.

- IN2 is a university spin-off founded in 2005, which was registered as a company in the United Kingdom in 2007 with an independent trademark registered in Bremen (Germany). IN2 provides solutions and services for multimedia content interaction.

- Information Technologies Institute (ITI) (previously known as the Informatics and Telematics Institute) was founded in 1998 as a non-profit organisation under the aegis of the Greek Research and Technology Secretariat General, with its main facilities located in Thessaloniki.