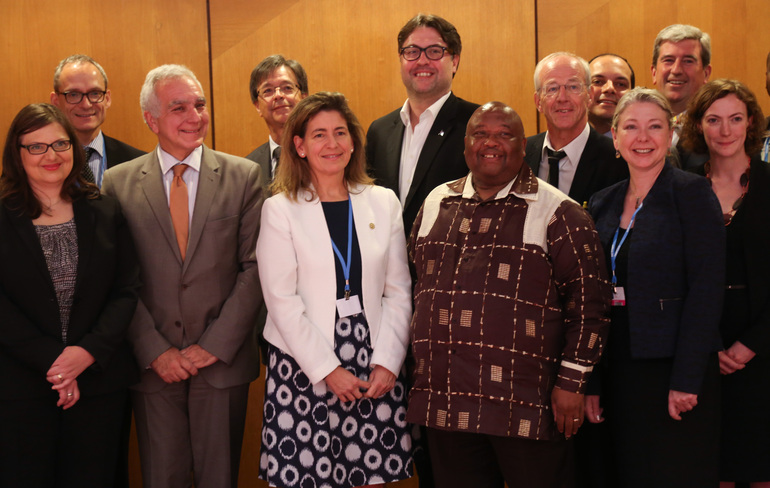 Summit on Climate Change in Peru

Ana Oregi has signed along with other regions the statement that will serve as the foundation for calculating the annual effects of greenhouse gases.

“We live in decisive times in the struggle against the effects of Climate Change which will require major decisions in order to reduce greenhouse gases  by up to 70% by the year 2050”.

The Alliance of Regions and States joined together in the  Climate Group for the reduction of carbon emissions, designated this morning the Basque Country as its president for Europe at the meetings being held at the United Nations Climate Change Conference  COP´20 in Lima at which the foundations are being laid for the protocol for Paris´2015 which will take the place of Kioto in the next years. The Minister for Environment and Land Policy of the Basque Government, Ana Oregi, along with ministers and delegates from other countries and regions, signed a statement which will serve as a base for guaranteeing the annual global calculation of greenhouse gases.

On behalf of the President of the Basque Government Iñigo Urkullu, the Minister for Environment and Land Policy Ana Oregi expressed her gratitude for the appointment this morning stating that “climate policy requires action in the international arena to ensure a combined effort at a global, regional and local level to put into action the necessary measures and to make society aware of the consequences of our actions”.

The Alliance of Regions and States joined together in Climate Group will be presided in Europe by Iñigo Urkullu, by the  Premier of Quebec, Philippe Couillard in America, and in Oceania by the South Australia leader, Jay Weatherill.

Oregi, who presided over various working meetings attended by national and regional representatives this morning in Lima stated “we live in decisive times in the struggle against the effects of Climate Change which will require major decisions in order to reduce greenhouse gases by up to 70% by the year 2050”.

The Minister Oregi transmitted at COP-20 the support to the summit of Lehendakari Urkullu  who stated “the outcome of 2015 will be one of which we can be proud as the importance of this COP in Lima is that we are able to establish the foundations upon which the next  COP in Paris may reach a major agreement: a great, more ambitious “new Kioto”.

“Climate policy requires effort at all levels of decision making: from the international arena in order to guarantee a joint global effort, at a local level and including regional and national levels to set in motion the necessary actions and to make society aware of the consequence of our actions” commented Oregi who presented the main outlines of the Basque Country 2020 Environmental Framework Plan.

According to Ana Oregi “The transition to an economy of low carbon consumption presents new growth opportunities and new paths for development. However, the transformation of the energy and industrial model will meet resistance which we will have to stand up to and win over”.

Oregi, who will participate this evening in a meeting presided by  Mikel Boots, in charge of presidential environmental policy for the White House, signed on behalf of the Basque Government the Agreement between the States and Regions or compact, with the aim of achieving a fixed target for the reduction of greenhouse gases and to collaborate in carrying out an annual audit of greenhouse gases.

“By committing to these two essential actions along with other national and regional governments from all around the world and by providing annual data in a single transparent account to the Framework Convention of the United Nations on Climate Change - CMNUCC-, we are supporting the international process of climate change offering a clear display of the global contribution made by regional and national governments to increase the ability to compare regional and national efforts in different parts of the world and enabling greater collaboration and the vertical integration of climate policies on an international, national and regional level” states the agreement or “compact” which was passed today.

“With the move towards establishing a new international agreement in Paris next year, leadership in the arena of climate change has never been more important” highlights the agreement. “By means of this agreement, we aim to show that the state and regional governments are taking the reins of leadership as a stepping stone to further actions in the future”.