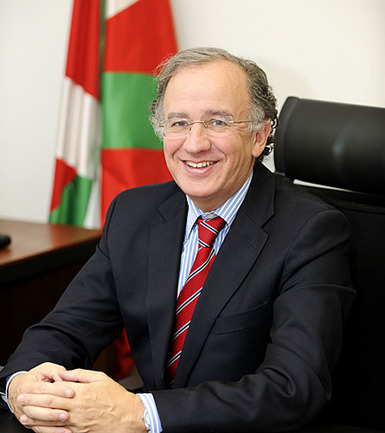 The Basque Country, a leading partner in the debates on the forthcoming European electric vehicle strategy

In Brussels, Guillermo Echenique -Secretary General of External Action of the Basque Government presented the Basque Electric Vehicle Strategy for the first time to European regions and institutions. Echenique defended the role of the Basque Country in what is to be "the greatest industrial and technological revolution in the automotive sector".

The representative of the Basque Government was speaking before the Automobile Crisis intergroup of the Regions Committee. He emphasised that "the Basque Country is key to the future of Europe as the Basque automobile, industrial and scientific sector offers the perfect conditions for the development of the European electric car in our Autonomous Community".

The Basque delegation also played an important part in the plenary session of the Regions Committee held recently in Brussels. This plenary meeting was attended by political representatives of all EU regions.

The Automobile Crisis intergroup of the Regions Committee has been set up by a group of European regions in order to promote the role of regions in the search for proposals and initiatives to offset the crisis in the automobile sector. Within the framework of this forum, European regions have had the opportunity to obtain first-hand knowledge of the specific objectives and initiatives that are currently underway in the Basque Country.

Echenique recalled that "the Basque strategy can be seen against the background of the overall support of the Basque Government for sustainability. The aim is that by 2020, 10% of vehicles sold will be electric". The forthcoming Basque Laws on Climate Change and Sustainable Mobility contain a number of actions in this regard.

The Basque electric car, an integral part of the European Strategy on Clean and Energy Efficient Vehicles

European regions and agencies have studied the contents of the Basque Strategy carefully, as well as the agreements and initiatives that have already been established in this region. The Basque delegation highlighted the five aims of its strategy:

- Support the Basque automotive sector in the development of systems and components for the vehicle.

- Support the Basque electrical and electronic equipment sector in the development of industrial and technological capabilities.

- Create a network of charging points within the Basque Country.

- Provide organisations and the public in our region with access to electric vehicles.

- Foster the development of a legal framework that favours the introduction and use of this vehicle at all levels and in all geographical areas.

The agreements reached between the Basque Energy Board (EVE) and REPSOL to support the research into and creation of vehicle charging points, are further examples of this initiative. It is expected that the installations will be operative in June 2011.

Basque cluster associations also form an integral part of the initiative. During the informal meeting of Competitiveness Ministers of the EU in February 2010 in Donostia-San Sebastian, a collaboration agreement was signed between the Automotive and Energy Cluster Associations of the Basque Country to work jointly in the development of the electric car and associated charging systems.

In his address to the meeting of European regions and agencies, the Secretary General of External Action of the Basque Country also presented a Decalogue of contributions to the European debate on the electric vehicle:

- It is essential to take measures against the increase in energy consumption deriving from transport.

- The determined promotion of the electric vehicle is a reality - vehicles are already being marketed in 2010.

- The electric vehicle represents an opportunity for companies to move forward, make progress and consolidate their business.

- The aim pursued by the Strategy in the Basque Country is that by 2020, 10% of the vehicles sold will be electric.

- It is necessary to update the technological standards of electric vehicles.

The Basque Government has taken part in the European debate and in the public surveys carried out by European agencies from the very beginning. It supported the first European Strategy on Clean and Energy Efficient Vehicles, launched by the European Commission on April 28. It should be pointed out that the electric vehicle has been one of the priorities of the Spanish presidency of the EU, which began the debate on this subject at the Informal Meeting of Competitiveness Ministers in Donostia-San Sebastian in February of this year.