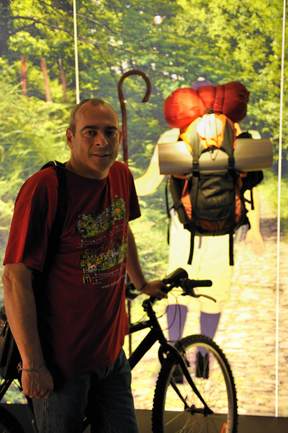 The government is promoting the Way of St James with a total of 37 cultural events programmed in 22 municipalities of the three Basque provinces. The coastal route is the third most popular route after the French and Portuguese routes.

Promoting the Way of St James through the Basque Country. With this aim, a Basque Government delegation walked the route today from Irun to Orio, (Gipuzkoa) on the Coastal Route.

The Deputy Culture Minister, Antonio Rivera, led a group which included the Director of the Etxepare Institute, the President of the Friends of the Way of St James in Gipuzkoa, Fernando Imaz, the head of the Orio Pilgrims Inn, Rosa Arruti, as well as a group of female inmates from the Nanclares de la Oca prison, and its priest, Jose Angel Martínez Bujanda. They all began their walk at the Santiago bridge in Irun, from which point they walked to Hondarribia, walked up to the Guadalupe Sanctuary, down to Pasai Donibane and finally visited the Way of St James interpretation centre in Orio.

This initiative is one of 37 cultural events programmed in 22 municipalities of the three Basque provinces, including activities such as street theatre, concerts, exhibitions, pilgrimage routes and storytelling. Moreover, within its Summer Courses programme, the University of the Basque Country will dedicate one day exclusively to an examination of the northern routes of the Way of St James at the Palacio Miramar in Donostia-San Sebastián.

The coastal route is at this time the third most popular pilgrims' way after the French and Portuguese routes. In 2009, more than 17,000 overnight stays were recorded, virtually three times the amount of only three years before. With regard to 2008, the increase in overnight stays by pilgrims in hostels was 3300, representing approximately 23% more than the previous year.