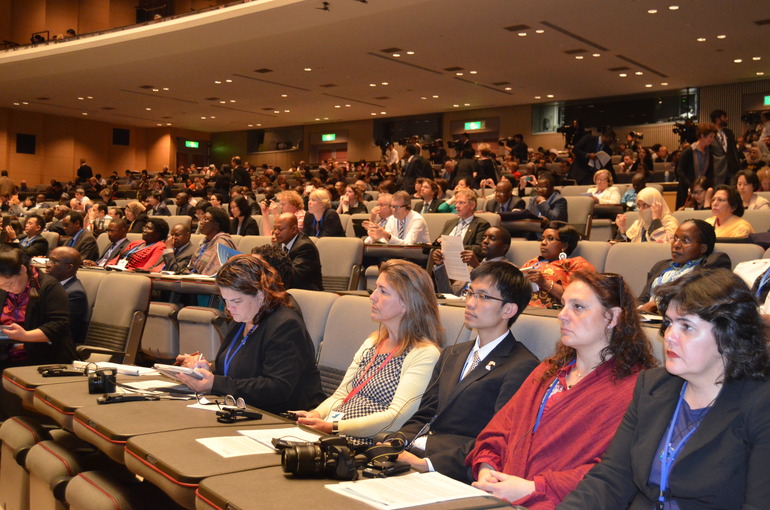 The Minister for the Environment and Land Planning for the Basque Government, Ana Oregi, pointed out that 70% of primary and secondary schools have participated in advanced projects for Education for Sustainable Development over the last ten years and announced the development of the Basque strategy for Education for Sustainable Development  in alignment with the objectives of the new global plan of action.

Oregi took part in the Unesco World  Conference for Education for Sustainable Development this morning in Nagoya, Japan, alongside other ministers and environmental and education leaders from all over the world. At the conference, the School Agenda 21 program of the Environment and Education Departments of the Basque Government was chosen among the 25  best education programs on the planet. Nayanananda Nilwala from Sri Lanka and Florence Pignolet-Tardan from Isla Reunión also intervened in the conference this morning alongside Ana Oregi, who also presented “best practices in environmental education”, from 12 other regions in the “nrg4sd” network.

The Basque Country, along with other countries and regions, is working with the Education Direction of the United Nations to integrate education for sustainable development into the framework of its competences.

The nrg4SD network was set up in 2002 at the Johannesburg Summit in an effort to achieve solidarity and sustainable development in all the regions of the world and joining the nations’ governments to meet this global challenge. Currently there are 38 regions and 11 regional associations  spanning 4 continents working to promote regional awareness and to achieve sustainable development all over the globe.

Oregi announced that “the target for the Basque Country for the next ten years, as well as launching new programs and continuing with the current ones -  School Agenda 21, Aztertu, etc.- is to sign up all the schools currently working in School Agenda 21 as associates for the next decade, naming them as associates for reaching the UNESCO targets for which they have been working towards for more than 10 years in School Agenda 21. This recognition should not require more effort than that which 70% of our primary and secondary schools have already been making in the Basque Country and will give them the deserved international recognition of the United Nations”.

According to the Minister Oregi, there are 10 conclusions to be drawn from the first decade of the project: education systems are becoming more concerned about sustainability, enabling children to tackle new challenges;  education programs for sustainable development are converging more and more with education agendas; the political leadership has been crucial and the advances achieved are a direct consequence; alliances between the parties involved have demonstrated the success of collaboration. One example has been the alliance established between universities; measures at a local level are fundamental, increasing local commitments  and underlining the need to intensify these commitments; all measure have to be integrated with a coherent focus on the part of the relevant institutions; ESD has encouraged interactive education, based on new technologies and promoted a critical viewpoint among children;  ESD has become well established in education; informal ESD is a growing force and the population is becoming more and more aware, although we have to increase our efforts in this aspect, finally, professional and technical training is also beginning to work with ESD.

The results obtained by School Agenda 21 in the Basque Country has led UNESCO to select the Basque project as one of the 24 best practices in education for sustainable development in the world and for this reason the Basque Government was invited to this Nagoya World Summit.