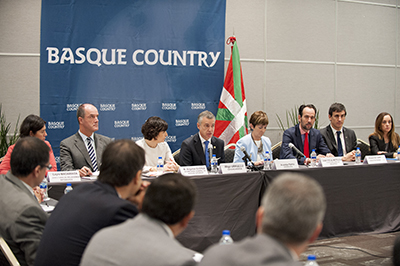 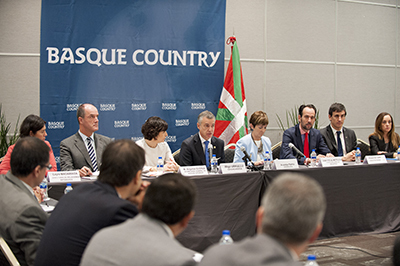 Lehendakari Urkullu, the Basque Premier, stressed the similarities between the “economic agenda” of the Basque Country and Mexico during a meeting with 30 Basque companies based in the states of Querétaro, Guanajuato and San Luis Potosí.

The Lehendakari announced the implementation of a supplier support network to streamline the work of the companies aboard, particularly the energy, aeronautics and automotive sectors.

Lehendakari Iñigo Urkullu kicked off his official visit to Mexico in Querétaro with a meeting with representatives of 30 Basque companies based in the states of Querétaro, Guanajuato and San Luis Potosí, in order to share experiences and learn firsthand the business situation in those three states, where many of the Basque production facilities are based. Minister Arantza Tapia and representatives of her department, who are accompanying the Lehendakari on this trade mission to Mexico, also took part in the meeting.

Urkullu stressed to the business community the rise in the number of companies setting up in Mexico and indicated that the purpose of this trip is to help to ensure that the number continues to grow.

“We want to listen and exchange information to target our initiatives more efficiently, in a key country in our strategy, in terms of presence, opportunities and future stability,” he pointed out.

The Lehendakari announced the implementation of a supplier support network to streamline the work of the companies aboard, particularly the energy, aeronautics and automotive sectors. This network will in turn help with the internationalisation of Basque SMEs.

Iñigo Urkullu stressed the many similarities that he believes exists between the Basque and Mexican “economic agendas” in sectors as important as energy, aeronautics, information technologies or electrics-electronics.

He gave the example of the Mexican Government’s reform of the energy sector and stressed the priority nature of that sector for the industrial and technological development of the Basque economy. “We have experience in and companies in the generation and distribution sector, capital goods suppliers, engineering and electric installation services. We aspire to be in the world Top Ten in the energy sector,” he said.

Lehendakari Urkullu also stressed that the Basque Country also has companies specialised in the areas of the Infrastructure Programme 2018 approved by the Mexican Government.  That programme envisages investments in communications and transport, energy, hydraulic infrastructures, health, urban development, housing and tourism.

At another point of his speech, the Lehendakari referred to the economic situation of the Basque Country – whose growth forecasts for the coming year stand at 1.7% - and he linked the positive performance of the Basque economy to the capacity of its companies. “Today is a good day to pay tribute to their work and encourage them,” he said.

The Lehendakari told the members of the business community at the meeting that they are an example for a country wishing to internationalise and stressed that they represent the “economic diplomacy of the Basque Country”.

Urkullu indicated that the Basque economy is “doing well” and its growth forecasts are based on three cornerstones: its export and industrial base, the human development and sustainable growth strategy – the Basque Country heads the OECD life quality and wellbeing ranking in the Spanish State - and the consolidation of peace after three years of the end of ETA.

At this point, he referred to the industrial and economic policies implemented by the Basque Government and, specifically, to the Job and Economy Reactivation Framework Work, which includes stimulus measures and support for the productive economy in order to generate new job opportunities.

“The last example,” he said, “is the setting up of the Basque Internationalisation Consortium which comprises all public institution and chambers of commerce". “Internationalisation is key and it is a process that must be above all professional. Therefore, we would like to reiterate our backing of the companies that are here and we are committed to the private-public cooperation model,” he explained.

The states of Querétaro, Guanajuato and San Luis Potosí account for around 7% of Mexico’s GDP and are home to many of the Basque production facilities in that country, and practically 30% of the industrial employment generated. The majority of those facilities are in the automotive, aeronautics, household appliance component, tool and equipment for construction sectors.

After the meeting with the business community, the Lehendakari will open the Mondragón-UCO University (12.00 hours) and will meet with Governor of Querétaro, José Calzada (20.00 hours).  Local time (+7 hours in the Basque Country).