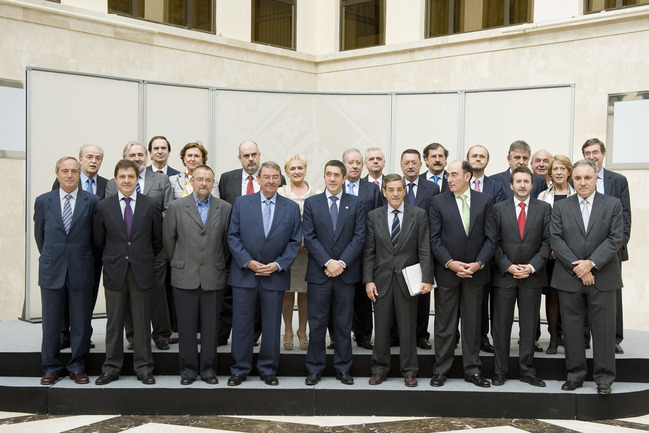 The Committee focused its attention on measures adopted by the Basque Government to make savings and to rationalise public expenditure and examined the Future Competitiveness of the Basque Economy and Strategic Basque Sectors.

The members of the Advisory Committee coincided in their determination to make the Basque Country a Talent Metropolis in 2030.

The Lehendakari's Advisory Committee for Socio-economic Matters held its second meeting today, chaired by the Lehendakari himself, in order to analyse the two issues agreed upon at their first meeting in March:

Over the last three months, the Working Committees have drawn up dossiers on both of the aforementioned subjects.

The Committees were formed by 22 and 15 specialists, respectively, professionals from private companies, institutions and the deputy ministers of those departments of the Basque Government responsible for the subjects dealt with. Each Working Committee has met on three occasions at the Lehendakaritza. The plenary session of the Advisory Committee based its discussions on the documentation and conclusions reached by each of the Working Committees.

A number of consulting companies of international renown, with an in-depth knowledge of the current economic situation of the Basque Country, took part in the analytical process of both of the areas mentioned above.
On the one hand, the Boston Consulting Group collaborated in the study of "The Future Competitiveness of the Basque Economy" and on the other, Deloitte collaborated in the examination of "The Basque Strategic Sectors and their Future". These companies were responsible for preparing the preliminary analytical documents for each of the meetings held by each Working Committee.

At the meeting of the Advisory Committee held today, the Lehendakari began by giving an account of the set of measures approved yesterday by the Cabinet. These aim to reduce and rationalise the public expenditure adopted by the Basque Government.

The Lehendakari went on to highlight the technological, scientific, social and economic changes that society will undergo over the next 20 years. Among other questions, he pointed out the profound changes that we are going to see in the economy, governance, lifestyle, social relations and the integration of immigrants, together with extraordinary advances in fields such as health, information and communications technologies, education, engineering, robotics and energy.

The Lehendakari pointed out that we are witnessing the birth of a new society, in which the immense majority of its defining features will undergo transformations of such magnitude that when, in 2030, we look back at 2010, we will see the recent past as part of distant history.

Likewise, the Lehendakari declared that the future of successive generations will depend on our successful adaptation to the wave of changes driven by macro-trends that affect the global economy and that we already beginning to feel.

A Metropolis structured and hyper-connected internally and externally through a closely-woven grid of physical and digital infrastructures. A networked metropolis.

A Metropolis promoted by a 21st century Public Administration that combines its different levels in a system of collaboration and cooperation based on innovating and efficient management in the exercise of its functions and in the rendering of services. A metropolis of excellent governance.

A Metropolis in which companies are oriented to and compete successfully on international markets. A globally competitive Metropolis.

A Metropolis formed by people from different backgrounds who contribute a range of different values to the common social and cultural capital of Basque society, in which social cohesion and sustainability form part of its constituent nucleus. A metropolis of co-responsible and free citizens.

Finally, so that our Metropolis can grow, develop and face the future with guarantees, it is essential for us to be able to generate, keep, attract and use talent. The intelligent, innovating and creative human capital, in other words, talent, is the main asset of our presence in a globalised world. The key for the future is shared human talent, social talent.

Following the Lehendakari's speech, the main reflections and conclusions reached by each of the Working Committees were set out:

Working Committee on the Future Competitiveness of the Basque Economy

With regard to the first issue, the Advisory Committee identified 9 overall macro-trends which will affect the Basque country over the following two decades:

1. Ageing of the population
2. Increase in connectivity
3. Focus on innovation, creativity and productivity
4. Globalisation
5. Education and talent as a competitive advantage
6. Digital world
7. Clean technologies
8. Sustainability and social awareness
9. New forms of governance

All this has highlighted the need to foster intelligent, sustainable and integrating growth.

1. Active management of the Demographic Pyramid.
2. Sustainability of Public Accounts and rationalisation of the Basque Public Administration.
3. Make the Basque Country a reference model in the field of energy management.
4. Achieve an optimum Competitive Dimension in the area of internationalisation.
5. Foster an Enterprising Culture and Capacity.
6. Consolidation of "champions" in the Basque strategic sectors and maintenance of Decision Centres.
7. Develop a policy to support the presence of Basque executives abroad.
8. Promote a new Model for Labour Relations.
9. Reinforce Systematic Innovation.
10. Achieve excellence in Human Capital.

Taking into consideration the economic situation of the Basque Country, the Advisory Committee analysed the current and future situation of specific, fundamental sectors for the Basque economy, especially those relating to the industrial sector and the services sector.

In this sense, the Committee carried out a non-excluding, multi-sector analysis which considers the strategic situation of a map of some of the representative sectors of the Basque economy.

The members of the Committee consider that the 17 sectors indicated above are fundamental for the Basque economy. Moreover, they believe that, in view of the Macro-trends of the future, Energy, ICTs and Electronics, Biosciences, Social Services and Health Services are strategic sectors for the Basque economy. These sectors will enable it to face up to the challenge of achieving intelligent, sustainable and integrating growth over the coming decades.

The analysis of strategic industrial sectors has highlighted the importance of the aeronautics sector and of the need to attract new talent. Lastly, a fundamental aspect of this strategy is to develop sectors such as Automotive, Transport and Logistics, ICTs and Electronics.

During the debate, members of the Committee placed special emphasis on the following issues:

1. The pressing demographic challenge faced by the Basque Country and its bearing on the inadequate capacity of the Basque economy to create employment. This would require a major influx of human resources through immigration.

2. The need for the Basque production sector to strengthen its competitive dimension is a fundamental aspect in order to promote internationalisation and increase the innovative capacity of Basque companies.

3. The importance of updating our social welfare model, ensuring the sustainability of public finances through a measured but profound analysis of our tax system.

4. The fundamental importance of training and education in order to make people the main asset of Basque society in the future.

5. Lastly, the Committee pointed out that the current measures make sense as long as we know where we are going, in view of the fact that it is necessary to make the harshness of the present compatible with the dreams of the future. The interim measures required by the Basque economy strengthen their efficiency by incorporating these into a strategic reflection on what kind of future we want for the Basque Country.

The Advisory Committee concluded by manifesting its confidence in the future of the Basque economy, as it has the necessary capabilities and resources to come out of the present crisis in a stronger position.

Over the coming months, the Advisory Committee will continue its work of reflecting on and proposing specific measures for the social economic future of the Basque Country.