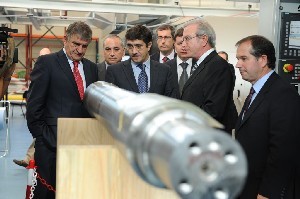 The Lehendakari, Patxi López, made these declarations in Bergara, during the inauguration of the new, 12-million euro building of Danobat Railway Systems, where mounted railway axles will be made for the Russian company TVSZ.

"Investment and innovation are the keys to resisting the effects of the crisis in the machine tool sector and in Basque industry as a whole. This policy will ensure an even stronger position when the crisis finally comes to an end". With these words, the Lehendakari, Patxi López, defined the "clear and firm support" of the Basque Government for the industrial sector, which is even more determined due to the seriousness of the current economic crisis and is in line with the intentions of the Government to go ahead with the aid for companies, promote investment and increase production.

López made these statements in Bergara, during the inauguration of the new Danobat Railway Systems building, which houses the production line that will manufacture mounted railway axles for the Russian company TVSZ, involving a 12 million euro investment. The company employs 65 workers and there are plans to increase its workforce to 200, thus complying with the commitment to create "local, highly qualified employment".

The inaugural ceremony was attended by the Ministers for Industry and Transport, Bernabé Unda and Iñaki Arriola, the President of Mondragon Corporación, José María Aldekoa, and its Vice President, Rafael Barrenechea, as well as the Managing Director of Danobat Railway Systems, Antxon López Usoz.

The Lehendakari, who described the installations of Danobat Railway Sytems as "exemplary", highlighted the importance of the industrial fabric of the Basque Country and more specifically, of its machine tool sector. In this sense, he pointed out that today, the Basque Country represents almost 80% of this sector at a state level and is the ninth largest world exporter and producer.

López explained that industry must continue being the "driving force" of the Basque economy, especially now, "when we are in the grip of a major economic crisis, the consequences of which are being felt by everyone", hence the "determination of the Basque Government to look after and provide incentives" for this sector. Examples of this include the Machine Tool "Renove" Plan, provided with 5 million euros, which seeks to "modernise manufacturing installations and promote an increase in productivity in order to secure higher competitiveness levels".

López described Danobat's initiative as "exemplary" and highlighted the work of the Ideko technology centre, pointing out that installations such as these "will allow Basque industry to secure a foothold in key markets" and "ensure that the idea of innovation for improving the competitiveness of Basque companies will be put into practice". He concluded, "We must give our unbridled support to R&D&I and apply its results for the benefit of our companies, to enable them to compete in ever more technology-based global markets, because only in this way will we be able to ensure an early exit from the crisis and place ourselves in an extremely favourable position".