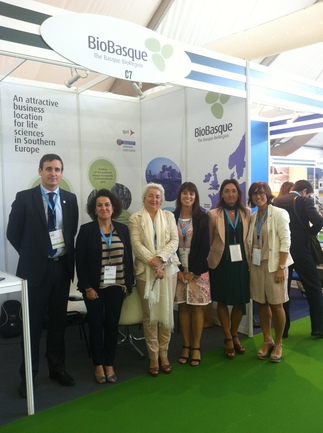 - Basque bioscience is well represented at the most important Spanish exhibition in this sector, held in Santiago de Compostela between 24 and 26 September.

- The Basque Government Department of Economic Development and Competitiveness, the SPRI Biobasque Agency, Basque companies Histocell, Noray and Praxis and the Gaiker-IK4 technology centre are all attending.

The Basque bioscience sector will have an unbeatable opportunity to present its credentials at Biospain 2014, the most important biotechnology event in Spain. A Basque delegation made up of the Basque Government Department of Economic Development and Competitiveness, through the BioBasque Agency of SPRI, plus a large business contingent representing the Basque biotechnology fabric will take part in this event, to be held in Santiago de Compostela from 24 to 26 September.

Biospain is a biennial event organised by ASEBIO, the Spanish Bioindustry Association -this year with the collaboration of the Xunta de Galicia (the Government of the Autonomous Region of Galicia)- whose aim is to demonstrate the strength of the biotechnology sector and also the relationships between the different players in the sector, companies, research centres, government agencies, etc. At its previous edition, held in Bilbao in 2012, the event attracted 762 exhibiting companies, 1,850 delegates from 25 countries and hosted some 2,800 business meetings.

The Biobasque Agency (SPRI), Histocell, Noray, Praxis and Gaiker-IK4 will each have their own stands, on which a representative sample of the capabilities of the Basque BioRegion will be exhibited.

Moreover, within the framework of the official Biospain programme of activities, the Biobasque Agency (SPRI) will organise a session on 24 September entitled "Key Enabling Technologies Applied to BIO", presented by the Basque Government Deputy Minister for Technology, Innovation and Competitiveness, Estibaliz Hernáez, which will also feature the participation of some of the main players in the Basque biotechnology sector, such as the companies MidatechBiogune, Praxis Pharmaceutical, Histocell, Dinakyn, Innoprot, BBD Biophenix and the Gaiker-IK4 technology centre.

The Deputy Minister will open the session with a speech that will explain the Basque commitment, in the framework of the Smart Specialisation Strategy RIS3, to establish and consolidate a space for generating scientific knowledge and its later transfer to innovative solutions in terms of product in the biomedical or biotechnology field, as well as in terms of generation of new business ideas.

The raison d'être of this commitment lies in the implementation of public support policies for traditional sectors such as industry and advanced manufacturing, while also contributing to face new challenges arising from the promotion of diversification into new knowledge-intensive sectors, for example the healthcare sector, in areas specifically addressed to ageing, etc.

The purpose of the session, which will begin at 3pm, is to show the capability of biotechnology as a knowledge-intensive sector that integrates technologies such as new materials, nanotechnology, microtechnology and ICT. The session will also touch on the competitive advantages offered by the convergence of different technologies and will present case studies of applications developed by companies in the bioregion.

At the same time, the Enterprise Europe Network (EEN), a network created to support European SMEs, in which SPRI participates as coordinator of the Basque EEN Consortium, along with other entities, is arranging bilateral or partnering meetings that will bring small and medium-sized companies into contact with the most innovative European companies in the biotechnology field with a view to establishing future collaboration.

The biotechnology sector in the Basque Country consists of more than 70 companies and a score of entities involved in research, including universities, research centres, technology centres and hospitals. This sector, with growing importance in the Basque economy, currently employs about 26,500 people and invoices around 300 million euros per year.