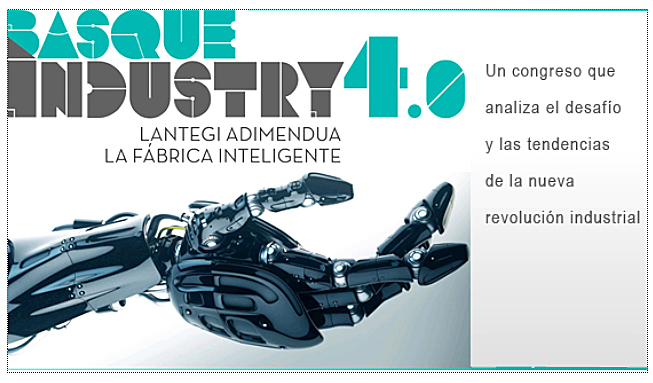 - The Director of the German Research Centre for Artificial Intelligence (DFKI) and the person tasked by the German Government with designing the plan to modernise manufacturing is to open the ‘Basque Industry 4.0. The Smart Factory' organised by SPRI for 15 October

- The event comes under the Basque Smart Specialisation Strategic Plan and will be attended by representatives of cutting-edge companies and technology centres including Tecnalia, IK4, Danobat, Inteligente or Sisteplant

- Workshops are also planned at the event and they will showcase the practical applications of technologies such as augmented and virtual reality, artificial vision, robotics of cloud computing.

On 15 October, Wolfgang Wahlster, Director of the German Research Centre for Artificial Intelligence (DFKI) will unveil in Bilbao some of the ways in which the new technologies will revolutionise industrial production in the coming years. Wahlster will be the keynote speaker at the event organised by the Basque Government’s Ministry for Economic Development and Competitiveness, through SPRI its business development agency. The event aims to foster the adaptation of industrial companies of the Autonomous Community to the innovations in electronic, information and communication technologies (EICT). Specialists from Basque cutting-edge firms and technology centres including Tecnalia, IK4, Danobat, Invema or Sisteplant will be at the event, entitled 'Basque Industry 4.0.  The Smart Factory' and which is to be held at the Euskalduna Conference Centre starting at 9.00 a.m.

The event comes under the Basque Smart Specialisation Strategic Plan, where the Basque Government establishes the regional R&D&i priorities in order to focus its resources and investments in areas where there are clear synergies with the potential and existing capacities of the country.

The fourth industrial revolution is enabling what can be called “smart factories”, a trend known as ‘Industry 4.0' in Germany.  The smart factory is a computerized version of the factory where all the processes are interconnected and interact. The challenge for this new industrial revolution lies in software development, massive data analysis and storage systems, incorporating sensors and electronics in the productive processes and products, and the timely availability of the all the information needed for decision taking.

Thus, augmented and virtual reality, artificial vision, robotics, additive manufacturing, cloud computing or massive data processing – Big Data would not only make companies more competitive in the short term, but they must also be seen as a guarantee for continuity in an increasingly more demanding market and where the crisis has highlighted the importance of innovation for companies to position themselves or, even, survive.

Within the reach of all industry

One of the aspects to be stressed by the experts at 'Basque Industry 4.0’ is that these technologies are not only within the reach of the most advanced industrial companies, but also that, once adjusted to the specific needs of each business, they are a viable investment allowing a rapid return thanks to the ensuing better results.  Thus, Wolfgang Wahlster, tasked by the German Government with designing ‘Industry 4.0’, will focus his keynote speech on "Industry 4.0: The Fourth Industrial Revolution based on Smart Factories"

Wahlster has run the German Research Centre for Artificial Intelligence (DFKI) since 1988, where he heads a team of over 600 scientists. During this quarter of a century, their research has led to 68 companies being set up to exploit the technology developments of the DFKI. Doctor Wahlster is also a member of the German Scientific Union and of the Swedish Royal Academy of Sciences (in charge of the Nobel prizes). Wahlster is in charge of the strategy to digitalise German manufacturing.

After Wahister’s speech, representatives of cutting-edge Basque companies with experience in the application of these technologies will show their viability.  The first session, entitled “EICT Trends for Industry 4.0”, features a panel of experts in each of the key technological trends.

The morning session will end with a roundtable that will discuss “The Challenges and Opportunities of Industry 4.0 for the Basque Country’.  The speakers will be Agustín Sáenz, Director of Tecnalia Industry and Transport Division, Jorge Posada, Deputy Director of Vicomtech-IK4; Antxon López Usoz, Danobat Group’s Director of Innovation; Alfonso Ganzabal, Managing Director ofe Sisteplant Innovative Technologies; and Patricia Tames, Invema Associate Director. The session will be moderated by Tomas Iriondo, General Manager at Gaia.

Along with attending the morning sessions, delegates will have the opportunity to attend afternoon workshops which will show the applications can be put into practices and consider cases of each of the technologies showcased.

Industry 4.0 with Germany and industrial leadership in “Vanguard”

The institutional commitment to drive and support this new revolution of Basque manufacturing is being consolidated international with a Strategic Plan under the aegis of the Basque Government and, at the same time, consolidating the Basque presence in leading international groups that are setting the European smart industry strategy. Last week, a delegation of the Basque Government’s Ministry for Economic Development and Competitiveness, and of the SPRI, headed by Minister Arantxa Tapia, was invited to take part in the work sessions held with different German stakeholders (clusters, universities, technology institutes, companies, etc.) in order to monitor the trends and industrial policy strategy in this country.

The Basque Government has also been formally invited to take part in the international benchmarking promoted by the Federal Government through the Fraunhofer Institute for Production Technologies (manufacturing technologies).  In the words of Minister Tapia, that is “an opportunity for the Basque Country to have firsthand information on the latest advanced manufacturing trends”.

Since 2013, the Basque Country is part of the Vanguard group of 15 European regions, which have the common goal of attaining new growth through smart specialisation.