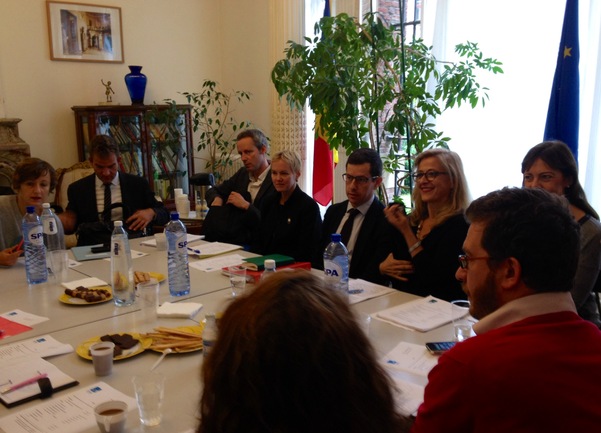 The Etxepare Basque Institute has been invited to work jointly

with the National Institutes for Culture of the European Union

During these days the work agenda of the Etxepare Basque Institute's Director, Aizpea Goenaga, is part of the foreign positioning strategy of the Basque cultural and creative industry and the Basque language. The Etxepare Institute has already an extensive track record working with European institutions and Belgian cultural institutions. The work and contacts established now also have had a markedly European and strategic focus, opening up specific possibilities for the Basque cultural sector.

Aizpea Goenaga participated this morning in the Managing Committee of the EUNIC European network, formed by the 28 National Institutes for culture in the European Union (Goethe, Alliance Française, Instituto Cervantes, Camoes, etc), where she has presented the lines of action of the Etxepare Basque Institute and has suggested proposals for cooperation and joint work.

As the Director of the Etxepare Institute pointed out, “it is exceptional for the EUNIC European network to invite us to take part and introduce ourselves to the National Institutes for Culture, which shows that our effort to promote international network cooperation is producing results”.

Likewise, the Etxepare Institute has met with the European Commission to specify and propose mobility options for artists, as well as cultural cooperation abroad, within the framework of the activities undertaken within the Creative Europe Programme, under which the lines of finance of the cultural sector are grouped.

On the other hand, she has made several cooperation and agenda proposals to the renowned National Fine Arts centre in Belgium,BOZAR, in order to give more visibility to Basque culture.