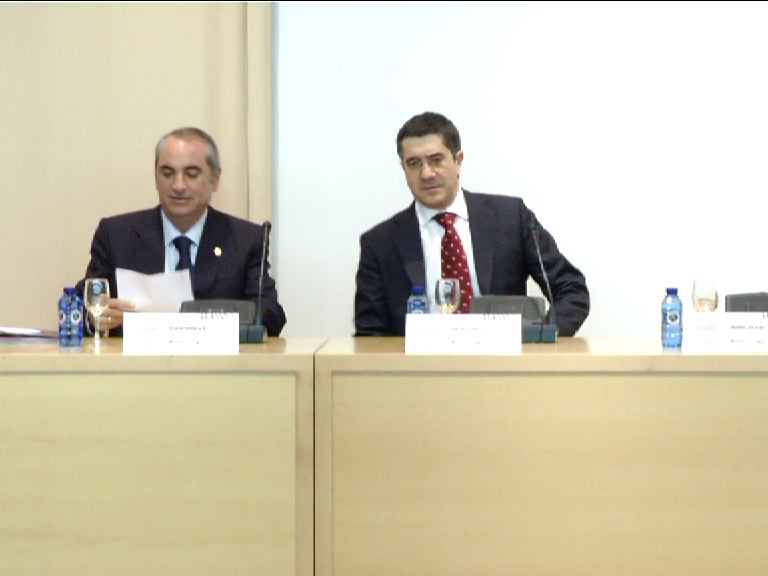 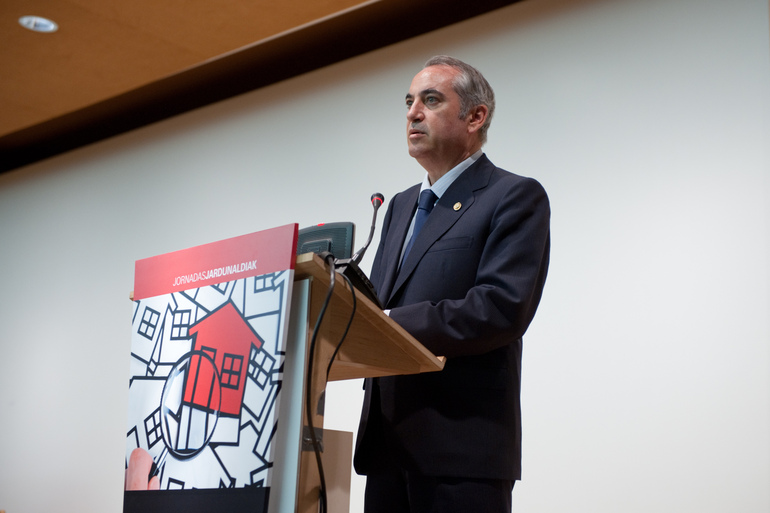 Download photo
Embed image
Download photo set (zip)
The Lehendakari encourages public institutions to “reorganise” and “rationalise” their structures according to the principles of transparency and participation Source: Irekia

The Lehendakari closed the Transparency in Housing Policies, Evaluation and Public Participation Seminar held at the Fine Arts Museum in Bilbao

Following an announcement in Parliament of a series of measures to control expenditure and increase savings, today, the Lehendakari expressed his intention to "reorganise" the structures of political institutions. In a serious crisis situation the aim, "beyond the spending cuts and adjustments being made at this juncture", is to make "an effort to rationalise public companies in order to avoid the duplication of jobs and responsibilities and the unnecessary lack of coordination that occur in an excessively segmented system, whose branches clash and overlap". In this context, thanks to the "values" of transparency and participation and the advances being made in the new technologies, this reorganisation can be made in accordance with "a new paradigm". It is now possible "to communicate bidirectionally" with society and the public can assume "co-responsibility" for contributing in the public decision making process.

The Lehendakari, Patxi Lopez, invited all public administrations to "reflect seriously" on the structures of several Basque companies and institutions. In view of the seriousness of the crisis, "beyond the spending cuts and adjustments being made at this juncture", the Lehendakari urged them to establish "a new way of governing" based on a bidirectional communications with the public, in which transparency and participation become the "backbone" of government policy. Within this context, the new technologies, especially Internet, play a fundamental role. An example of this "new paradigm" is Irekia, the portal of the Basque Government through which it "interacts" with the public, offering information in real time on "the activities, plans and intentions" of the government, and the Social Housing Agreements and the Housing Observatory promoted by the Minister, Iñaki Arriola.

For two days, the Fine Arts Museum of Bilbao was the venue of the Transparency in Housing Policies, Evaluation and Public Participation seminars in which a number of different experts, analysts and specialists in public housing policies analysed the current situation. The Lehendakari, Patxi Lopez, closed the seminar with the Minister for Housing, Public Works and Transport, Iñaki Arriola.

In his speech, the Lehendakari proposed that "serious thought" be given to the current structure of institutions and public companies, in view of the fact that in a "serious crisis", public authorities must make "an effort to adjust their dimensions to their real requirements". The Lehendakari, who considers that "transparency and participation" are the "pillars on which the policies and style of governance of the Basque Government are based", insisted that "We must move towards a new form of government". "The government of the future must be open and maintain a permanent dialogue with the public. It must be a government that speaks and listens to the public and it must, especially, draw conclusions and take into account the opinion of our citizens", he added.

In this regard, the Lehendakari pointed to 'Irekia', the portal of the Basque Government through which it "interacts" with the public, offering information in real time on "the activities, plans and intentions" of the Government, as well as "collaborative tools and working methods" for social organisations. In addition, Lopez highlighted the work being done by the Housing Department through the Social Housing Agreement and Housing Observatory.