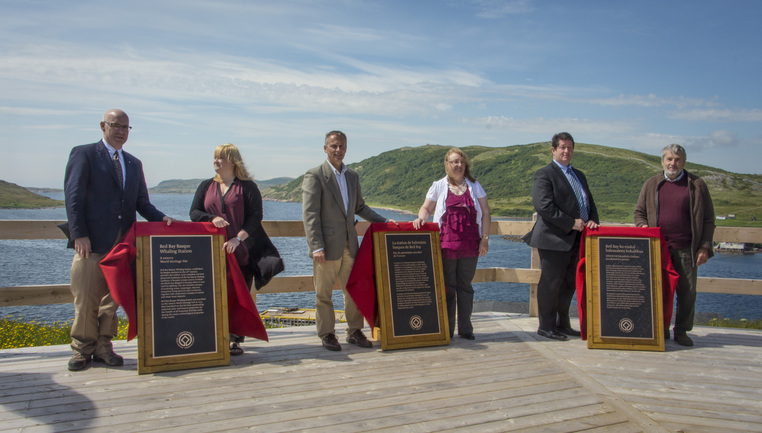 Today the inhabitants of Red Bay, a town in Labrador/Newfoundland, Canada, and a former 16th century Basque Whaling Station celebrated the designation by UNESCO as World Heritage Site by hanging a UNESCO plaque – in English, French and Basque – summarising the international importance of the place as regards its contribution to Canadian culture and history, and raising the flag of the international humanitarian organisation. The event was attended by Senator David Wells, Minister Sandy Collins, Mayor Wanita Stone, and letters of greetings were read out by the Basque Government Minister, Ana Oregi, and the President of Unesco Etxea, with the screening of a brief video in which Lehendakari Iñigo Urkullu highlighted the joint work carried out by Labrador and the Basque Country in studying their past.

Red Bay Basque Whaling Station was added to the World Heritage Site List by the UNESCO World Heritage Committee in June 2013 at its 37th session in Cambodia and is the setting of the continuous work carried out by the Parks Canada organisation – Canadian Government – to locate numerous findings of remains on land and underwater in its coves and bays in relation to whaling in the 16th century by ships from different parts of the Basque Country, such as Biarritz, Pasaia and San Sebastián. The place in south west Canada is also a Historic Site.

“This event is such a proud moment for all of us, especially since it’s taking place during our Come-Home-Year,” said Mayor Wanita Stone who chairs the World Heritage Site management committee


“For more than 30 years the people of Red Bay have been involved in the study, protection and presentation of our community’s history,” Stone said. “I have to acknowledge the outstanding work of those who have volunteered tirelessly over the years to ensure that the remains of the Red Bay Basque Whaling Station are properly cared for and recognized. They include members of the nomination steering committee, the private sector, private individuals and volunteer and cultural groups at home and in the Basque Country, as well as members of the management committee. Without their dedication and commitment, a successful nomination would just not have been possible.”

The site’s management group also includes representatives from Parks Canada, the Province of Newfoundland and Labrador through the Department of Tourism, Culture and Recreation, and the Department of Fisheries and Oceans.

“Our province boasts numerous sites of important cultural significance, and Red Bay is certainly one of Newfoundland and Labrador’s greatest heritage assets. It is an honour that this important part of our history will be protected and preserved under this heritage designation and will take its rightful place among the other world-renowned sites,” said the Honourable Sandy Collins, Minister of Tourism, Culture and Recreation.

Located on the Strait of Belle Isle, Red Bay was the largest and most important whaling station in the world in the 16th-century. The assemblage of submerged and terrestrial archaeological sites represents a thoroughly documented early example of economic exploitation of rich North American natural resources by European commercial interests. The site contains archaeological evidence of all the major elements of Basque whaling and associated activities. The Red Bay Basque Whaling Station is the first World Heritage site in Labrador and the third in the province as a whole, after L’Anse aux Meadows National Historic Site and Gros Morne National Park.