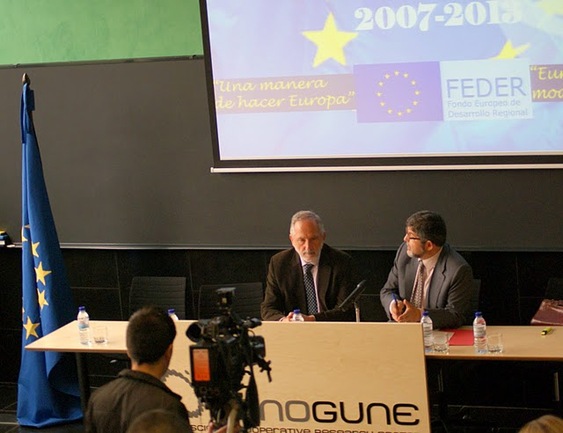 • The FEDER PV 2007-2013 Operating Programme involves approximately 500 million euros of investment for the period as a whole. These activities will be financed approximately 50% by FEDER.
• The meeting was held at the CIC Nanogune, a research centre specialised in nanotechnologies, a structure partially financed by FEDER.

Donostia-San Sebastian. May 27, 2010. At the press conference, the Economy and Planning Director of the Basque Government, Koldo Hualde, set out the conclusions of the Operating Programme Monitoring Committee of the Basque Country of the European Regional Development Fund (FEDER). The Committee assessed the projects included within the Operating Programme of the Basque Country. These initiatives receive European funds within the framework of the second objective of the European cohesion policy: "Regional competitiveness and employment".

This European objective coincides with the development strategy pursued by the authorities of the Basque Autonomous Community, whose collective aim for the coming years is the technological and social convergence with the most advanced regions of the European Union.

The Operating Programme is articulated in five areas of activity in which the different activities of the managing organisations are grouped. Of the total of 500 million euros of investment, 359 million, or 72%, correspond to the investments to be made in Area 1 "Innovation, business development and the knowledge economy".

With this aid, the intention is to encourage additional private investment by companies in this kind of innovating activity. The private investment that will be generated based on the subsidies is estimated at approximately 1000 million euros.

The venue chosen for the meeting of the Monitoring Committee was the Province of Gipuzkoa, specifically the CIC Nanogune, a research centre specialised in nanotechnologies, a project partially built and financed by FEDER within the framework of the Operating Plan.

The area of activity with the second highest endowment in the Operating Programme is the so-called "Energy resources and access to transport services" programme for which the amount programmed as public expenditure amounted to 100 million euros, 20% of the total programmed. The main project in this area is the construction of the third line of the Bilbao Metropolitan Railway, a basic infrastructure for the establishment of a sustainable transport system within the Greater Bilbao area.

The Monitoring Committee is made up of representatives of the Basque Government, the European Commission, the Ministry of Economy and the Treasury, the Provincial Councils and other organisations that pursue policies with the aid of FEDER, such as ICEX, the Carlos III Health Institute and Azaro Fundazioa.

In addition to public or private entities that pursue projects financed by FEDER, other organisations of a consultative nature such as CES, Eudel and Garapen (local development agencies) intervene in response to the spirit of partnership and collaboration that characterises the policies of FEDER.