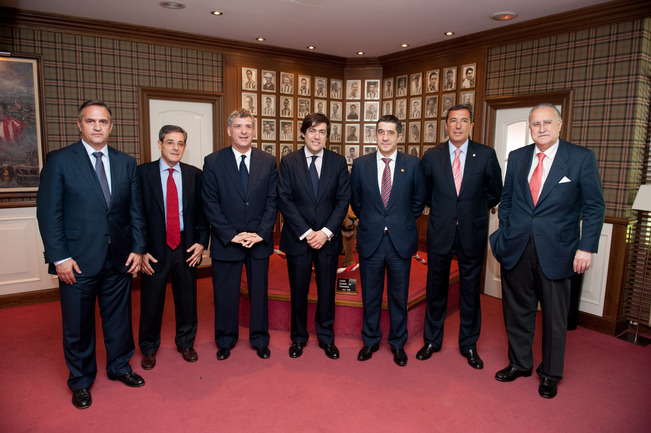 Jose Angel Iribar, "el txopo", was given the responsibility of taking a piece of the turf of the old San Mames, which will remain for ever under the foundations of the new stadium of Athletic Club. A piece of San Mames, which, together with a stone from the wall of the stadium, taken by Muniain, has passed through a human chain made up of hundreds of members of Athletic, players, ex-players, members of youth teams, members of the supporters club and enthusiasts of all ages. Among them, the most veteran supporter of Athletic, Federico Urieta, and the youngest, a child of scarcely four months, Eneko Vivanco, held by his father, were responsible for taking the turf and stone and to place these, together with other symbolic objects (a shirt and the badges of the different supporters clubs) on the site where the San Mames Barria will stand. The Lehendakari, Patxi Lopez, presided over this moving ceremony, in which he highlighted the coming together of all institutions to undertake an infrastructure that, in addition to improving the sports and economic prospects of Athletic, will contribute to "promoting the economy and employment of this area". Moreover, Lopez considered the generation of space by this infrastructure in this area of Bilbao for the "use and enjoyment of all the residents of Bilbao, the development of the University and the construction of new buildings and new accesses to Bilbao, was a very good thing". "It is an investment that contributes added value, which is what is required at this time", he emphasised.

May 26, 2010 is now an unforgettable day in the history of Athletic Club de Bilbao. It is the day when the first stone was placed of the new San Mames, a modern football stadium with public facilities that will replace the old San Mames for the 2012-2013 season. An historic and extremely moving day presided over by the Lehendakari, Patxi Lopez, who highlighted, in addition to the benefits that this new stadium will bring Athletic and the city of Bilbao, the coming together of all Basque institutions in favour of an "investment that contributes added value". "All the institutions of the Basque Country have succeeded in coming to an agreement to promote this project and that in itself is good news". "Together we have made investments that will promote the economy and employment of this area", he underlined.

The stone-laying ceremony of the new San Mames stadium was attended by leading representatives of the five partners of the company San Mamés Barria, which are to manage the construction of a new infrastructure: the Lehendakari, Patxi Lopez; the President of the Provincial Council of Bizkaia, Jose Luis Bilbao; the Mayor of Bilbao, Iñaki Azkuna; the President of the Bilbao Bizkaia Kutxa Savings Bank, Mario Fernandez; and the President of Athletic Club, Fernando Garcia Macua. One hour prior to this moving ceremony, the Minister of the Economy and Treasury, Carlos Aguirre, signed the membership contract to the company in the presence of the other four partners, Fernando Garcia Macua, Iñaki Azkuna, Jose Maria Iruarrizaga, Head of the Provincial Treasury and Mario Fernandez. The Basque Government becomes a member of this company with its contribution of one million euros, and will contribute a total of 55 million euros for the construction of the stadium.

In a brief statement to the large number of representatives of the mass media who witnessed this ceremony, the Lehendakari pointed to the importance of this "historic day for Athletic, for all the inhabitants of Bizkaia, for Basques and for all football fans in general". But he laid special emphasis on the agreement reached by all Basque institutions who have "reached an agreement in order to pursue the project, and that in itself is good news". "Together we have made investments that will promote the economy and employment in this area". Moreover, Lopez considered the construction of a new stadium as an operation of "added value" as it will generate space in this area of Bilbao for the "use and enjoyment of all the residents of Bilbao, the development of the University and the construction of new buildings and new accesses to Bilbao".

Responsibility for the most special moment in the ceremony was given to "el txopo", Jose Angel Iribar, who "stole" a piece of turf from the pitch of San Mames and placed this in an urn under the foundations of the new stadium. This urn also contained a shirt of Athletic and the badges of the supporters clubs, which together with a piece of the wall of the old stadium, extracted by the young Muniain, were taken by means of a human chain to the place where the new stadium will be built. A chain formed by members of the Lezama youth teams, Athletic's women's team, Baskonia, players, ex-players, members, supporters and fans who took part in such a symbolic day for entire family of Athletic Club de Bilbao. Finally, the most veteran supporter of Athletic, Federico Urieta, and the youngest, a child of scarcely four months old, Eneko Vivanco, in his father's arms, were given the responsibility of taking the piece of turf and stone in order to place these on the site where the future San Mames Barria will stand.