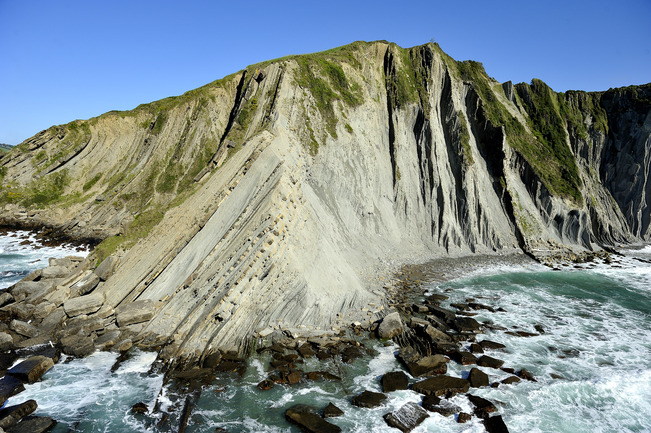 The Basque Government today announced the approval of the Basque Geo-diversity Strategy 2020 that Minister Ana Oregi will present to the press in Zumaia at 11.00 a.m. tomorrow, the 9th. The first Inventory of Places of Geological Interest of the Basque Country will be presented along with the Strategy.  The inventory will consist of 150 fact sheets for each of the sites with a detailed description of the geo-morphological characteristics that make them unique.

The Basque Coast Geopark is the territory made up of the municipalities of Zumaia, Deba and Mutriku and is consolidated as one of the most attractive tourist destinations of the Basque Country with a wide range of routes and guided tours aimed at showcasing its wealth of extraordinary cultural, landscape and geological heritage. In 2013, over 15,000 people enjoyed the programmed activities. The Basque Coast Geopark, the only one of its kind along the coast of the Bay of Biscay, has been part of the World and European Geopark Network since 2010.  The Network is made up by territories of with an internationally renowned cultural and geological heritage and has the express backing of UNESCO.

Every four years, each of the members of this Network must pass a revalidation process that guarantees that they are complying with the parameters that the Network lays down to remain as a member. This week, on 2 and 3 July, the Basque Coast Geopark will be visited by two assessors from the World Geopark Network in order to establish whether it can remain as a geopark for a further four years.

The European Geopark Network is currently made up of 58 Geoparks from over 20 European countries and its objectives are to protect geo-diversity, promote the geological heritage at grassroots levels, along with supporting the sustainable economic development of the territories, mainly by developing geo-tourism.