Irekia reaches 400,000 hits in its fourth month of existence 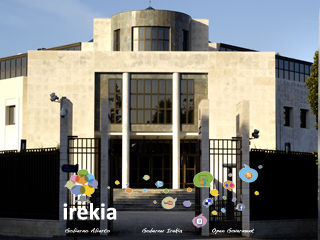 The aim for the coming months is to continue encouraging the participation of the public and interaction with government departments, increasing the number of official responses and comments to allow for a fluid and productive dialogue between the public and the government. Irekia Sets out to encourage and increase the awareness of departmental heads to ensure that Open Government continues to grow and becomes a common practice of good governance.

Irekia, the Open Government website of the Basque Country, has reached 400,000 hits since it was launched on January 25. In total, more than 93,000 single users have visited the pages of the website. to this figure we must add the increasingly important number of citizens who display Irekia's contents from their own e-mails as they are subscribers to the news and agenda rss streams. These figures indicate an average of 770 visitors a day, in which each user visits 4.19 pages on average. One of the latest features promoted by Irekia in the setting up of applications that allow the Open Government website to be displayed on cell phones. More than 1000 visits to the website via different operating systems have already been recorded.

Interaction is not only being recorded on the pages of the Irekia website but has gone beyond its frontiers. Every day there are more and more members of the public who follow Irekia via social networks. On Twitter, for example, Irekia already has 641 followers and their government responds to their queries via the same channel. Moreover, events and conferences are frequently broadcast using the corresponding tags and these broadcasts are proving quite popular with the community.

On Facebook, Irekia has 1172 followers. Interactions on the wall of this network are constant and some Internet users publish their own suggestions to be passed on to the appropriate department.

The aim for the coming months is to continue encouraging the participation of the public and interaction with government departments, increasing the number of official responses and comments to allow for a fluid and productive dialogue between the public and the government.

The interaction between users and apartments is growing gradually with contributions that complement the proposals of government departments with the proposals of members of the public, comments and a high level of participation in the weekly surveys. Even so, it is clear that we are just beginning a process of cultural change that affects not only our citizens but also the internal workings of the government itself. Over the next few months, an attempt will be made to continue encouraging this interaction, especially by increasing the number of comments and official responses of the departments of the Basque Government. Irekia will continue working to ensure that government heads include Open Government in their day-to-day exercise of good governance.