The SPRI office in Germany opened 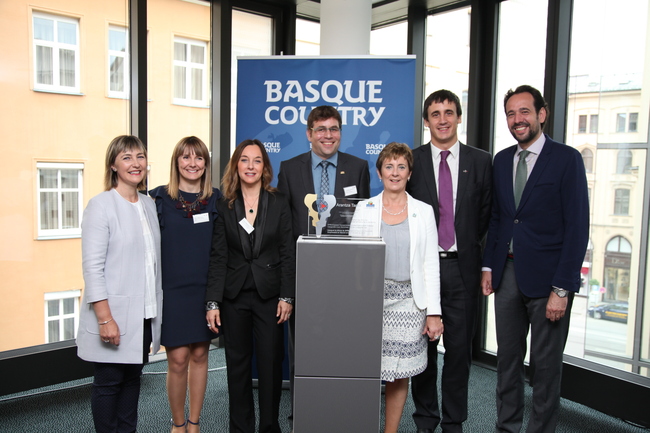 The SPRI office in Germany, located in Munich, has been officially opened this morning by the Basque Government's Minister for Economic Development and Competitiveness, Arantza Tapia, and the General Manager of the SPRI Group, Alexander Arriola.

Dr. Schwab, representing the Bavarian Ministry for the Economy, Resources, Energy and Technology,  members of Invest in Bavaria, and representatives of Basque companies set up in Germany,  were at the ceremony alongside the representatives of the Basque Government.

The Basque Government had announced some time ago that it would open a new Trade Office in Germany, as it is a market that can grow business and generate jobs in the Basque business fabric.

Since the office began to operate in January 2014, and from its location in Madrid, it has covered the whole German market, the 16 federated states or “Bundesländer”.

Germany has been a major partner of the Basque Country in terms of imports and exports in the last ten years. It is therefore, along with France, the main destination of Basque exports. 14.2% of our exports are to Germany It also has a preferential position as a supplier country. The second, after Russia. It is one of the countries with more commercial deployments of Basque companies. The companies with commercial offices in Germany are very pleased with their decision and they believe having a direct presence is fundamental.

As regards the types of projects being carried out from the SPRI Germany office, special mention should be made of those related to the search of distributors and/or commercial agents, market studies and preparing meeting schedules with potential customers. In principle, SPRI Germany is working in all sectors, but  the main ones are industrial services and goods, along with technology and software projects.

With the new office, SPRI seeks to intensify the economic relations with Germany that has traditionally been one of the main trade partners of the Basque Country, both in terms of exports and imports. This infrastructure in Munich will help Basque companies to establish trade links with the driver of Europe, by optimising its position in the country even further, thus growing the Basque economy and helping to generate jobs in the Basque Country.

Minister Arantza Tapia thanks the Bavarian institutions for their help in the starting up of this office and predicted greater intensity in the cooperation between the Basque Country-Bavaria given the mutual commitment to Industry 4.0 and Advance Manufacturing.

Tapia thus spoke out the cooperation that the Basque Country wishes to consolidate with the renowned Franhofer or German Research Institutes in the field of R&D&i.

She likewise stressed the Germany is one of the countries with most commercial deployments of Basque companies abroad, further proof that the presence on this market is considered to be fundamental and that its results are being positive.  There are currently 14 Basque companies with production facilities and nearly 80 with key commercial set-ups in the country.

The SPRI network abroad comprises 15 offices which provide support to Basque companies in over 70 countries.. Specifically, there are offices in Germany, which is being opened today, Argentina, the United States, Brazil, Chile, China, Colombia, India, Mexico, Poland, Czech Republic-Slovakia, Russia, Singapore and Turkey.

The international dimension of a company is fundamental to consolidate its growth and its innovative and entrepreneurial capacity. Our modus operandi involves supporting the people and all those projects of the Basque Country with an international profile, and also fostering the international management capacities of Basque companies.