The Basque and Bavarian governments sign a cooperation agreement in Munich 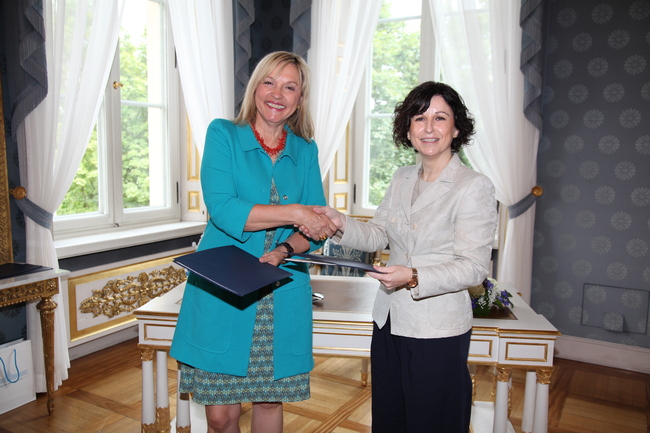 The Basque Government's Secretary General for External Action, Marian Elorza, and the Minister for European Affairs and International Relations of the Bavarian Government, Beate Merk, signed the Agreement today

The Basque Government and the Bavarian Government have today signed a cooperation agreement in order to strengthen relations and seek closer cooperation in areas that are of mutual interest.The signing took place in Munich, coinciding with the official opening of the SPRI office in Germany, which the Basque Government’s Minister for Economic Development Competitiveness, Arantza Tapia, and the General Manager of the SPRI Group, Alexander Arriola, attended.The office started up recently.

Germany is a major partner of the Basque Country in terms of imports and exports. Along with France, it is the main destination of Basque exports (14.2%) and also holds a preferential position as a supplier country.   It also stands out for being one of the countries with more commercial deployments of Basque companies.

The Agreement signed today by the Secretary General of External Action and the Bavarian Minister for European Affairs and International Relations renews the joint cooperation declaration between the Basque Country and Bavaria in 1994.  That has since enabled the fostering of bilateral relations in the different policy areas of interest, including research and development, education or security.

This new agreement establishes a cooperation framework that will lead to sectoral bilateral relations. The intention of both regions is to step up bilateral relations to cooperate in different areas of common interests. Specifically, the cooperation will be, initially, focused on research, development and innovation; the industrial policy and its most outstanding sectors such as the automotive industry, manufacturing or machine tooling; the environment and energy; vocational training, as well as homeland security and law enforcement cooperation.

The agreement has been signed for a two year term, which can be renewed. The cooperation will be based on ongoing contacts and working groups based on specific projects will be formed.

The Secretariat General of External Action of the Basque Government and the Chancellery of the Government of Bavaria will be entrusted with coordinating and monitoring the agreement.

This agreement is likewise part of the announced commitment to set up a network of strategic partners internationally, and particularly in Europe, which will increase the capacity to influence and, therefore, will allow Basque interests to be better defended abroad.