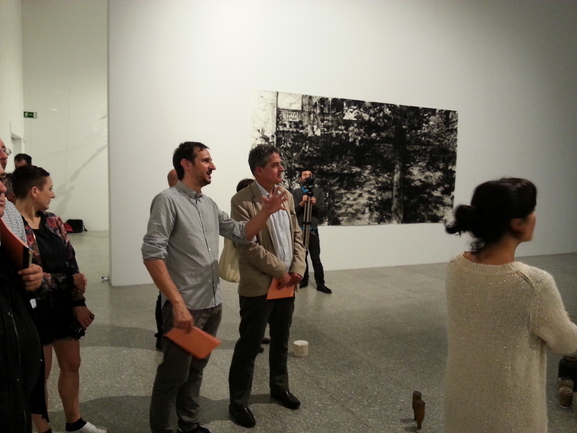 First Thought Best is a collective exhibition produced by the eremuak programme with the artists selected from the " 2014 exhibition” call. First Thought Best stresses the here and now. The exhibition is related to the Basque artistic context and seeks to display works and projects that need to be showcased in exhibition format, thus activating a public reception space.

The artists that have participated in this call are from different generations and their training reflects very different interests. Yet the relationship of the artists with the Basque sphere, and a -specific- time enables a workplace that operates as an observatory of an artistic reality where notions such as “system”, “context”, “community” and “institution” become inescapable paradigms.

This exhibition seeks to reflect some of the current key lines of action and artistic practices through works that use sculpture, drawing, painting, audiovisual language and performance practices.  Some of the themes in the exhibition introduce constructed nature and the landscape, whether it is natural or industrial (Domínguez, de Diego, Buchwald & Koochaki, Elgoibar); the media representation systems and the “disorder” of the image in the current political and economic context (Marte, Sádaba); the saturation of the consumption society and its icons associated to popular culture (Alfaro, Llaría); the sculpture and recycling of the forms and signs (Crespo, Baldés); the creation of personal worlds where the linguistic and subjective coincide (Aitzkoa, Montón, Bilbao); the control systems and institutional dynamics (Otamendi); the cross between design, art and education (Arenzana); or language as a problem in communication through performance (Urra).

Thus, First Thought Best provides an outline and an image of what is happening in the present moment. A photo among many possible photos. One, in the present. The title First Thought Best refers to the phase “First thought, best thought” which is nearly a slogan that the poet Allen Ginsberg used to describe the spontaneous writing. Poet of the immediacy and one of the leading figures of the Beat Generation of the 1950s, his composition method was the transcription of the moment.

CONTEXT OF THE EXHIBITION

First Thought Best started out with the responses received to an open call of the eremuak programme, which numbered over a hundred, and, in the same way as the programme that it comes under, was built (“live”) up based on the relationship of artistic practices and discourses.

The exhibition emerged from the need to visualise artistic projects and works by rethinking the format of the group exhibition, a reflection that arose in conversations held with artists and professionals from the sector at different work sessions and meetings organised by the eremuak programme.  Thus, eremuak took up this problem and launched a specific call at the start of the year aimed at the participation in this group exhibition.

Since eremuak got underway in December 2010, one of the main lines of work of the programme has been to identify the needs and discourses present in contemporary artistic practices, along with driving actions that contribute to the enriching and implementation of those debates.

In this line, the exhibition seeks to likewise be a meeting place between artists, critics, curators, fostering exchanges between different work processes.

8.00 p.m. Opening of the exhibition and Inauguro by Amaia Urra.

The museum will offer guided tours of this exhibition as part of its general tour programme at noon and 6.00 p.m. on Wednesdays, Saturdays and Sundays in July and August. More information and bookings: 945 20 90 20