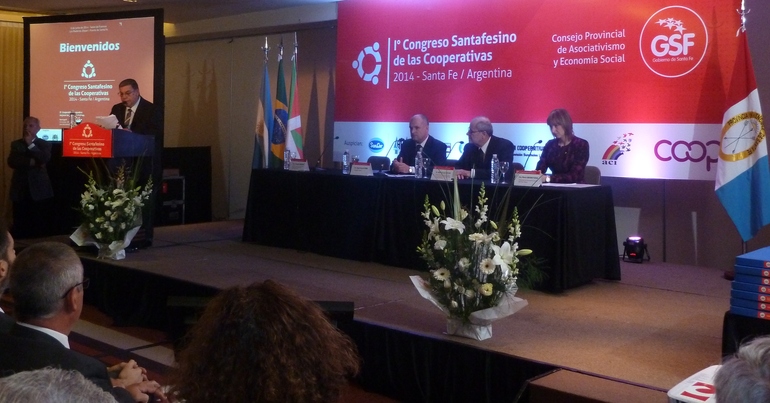 As the guests of the Government of Santa Fe Province, the Basque Government’s Social Economy Director, María Ubarretxena Cid, and the Chairman of the Basque Cooperatives Confederation – Konfekoop, Javier Gobierno, outlined the situation of Basque cooperativism at the ISanta Fe Conference on Cooperatives, held in Argentina.  Their participation at the well-attended event marked the end of a busy schedule organised by the Basque Country Delegation in Argentina – Mercosur, which had taken them to different parts of the southern-hemisphere country to showcase the Basque cooperative model and learn about local experiences.

María Ubarretxena and Javier Goienetxea described the situation of the Basque cooperative sector to an auditorium filled with 800 Argentinean members of cooperatives, who were meeting in the city of Santa Fee (500 km from Buenos Aires) to discuss the perspectives of the sector. While the Social Economy Director spoke on "Public-Private Harmonisation between Government and Cooperatives”, the chairman of Basque cooperative set out his vision of the challenges facing the sector in the 21st century. The other speakers included Danel Ayastuy, the Copresi Regional Director for South America, who described the internationalisation experience of a Basque cooperative from a specific example.

The presentations were preceded by the signing of an agreement between the Basque Government and the Government of Santa Fe Province.  The agreement will provide a general framework to develop social economy relations between both authorities.

Ubarretxena and Goienetxea had earlier taken part in “The Basque Cooperative Experience”, which was held in the Senate Chamber of the Province of Buenos Aires, in the city of La Plata (50 km from Buenos Aires. With around a hundred delegates present, Senate Hernán Albizu hosted this meeting that was an opportunity for cooperative members from Buenos Aires to learn a little more about the situation of the cooperative sector in the Basque Country.

The Basque representatives also visited the city of Sunchales, in the province of Santa Fe, which is known as the capital of Argentinean cooperativism and has been twinned with Arrasate-Mondragón since 2007.  They there visited the Sancor Seguros and Sancor Cooperativas Unidas Limitadas(with the latter specialising in the production and marketing of dairy products and by-products) cooperatives, both of which are regional leaders on their respective markets. They also visited the Sunchales Cooperative Headquarters, where they attended the presentation by the President of the Raúl Colombetti institution and by the Sunchales Secretary for Economic Development and Cooperativism, Samuel Delbon.

During the visit, the Basque delegation also had the opportunity to meet with Patricio Griffin, President of the National Institute of Associations and Social Economy (INAES), to take part in a roundtable with members of cooperatives at the Cooperative Confederation of the Republic of Argentina (Cooperar); learn about the Usina de Medios programme, an INAES and Cooperar joint undertaking; and visit the Laurak Bat and Euzko Etxea Basque centres in Buenos Aires and La Plata respectively.  The latter will be celebrating its 70th anniversary in 2014 and will host the annual meeting of the Basque community next November.