"Innovation, competitiveness and internationalisation", the Lehendakari’s recipe to help the catering sector deal with the crisis 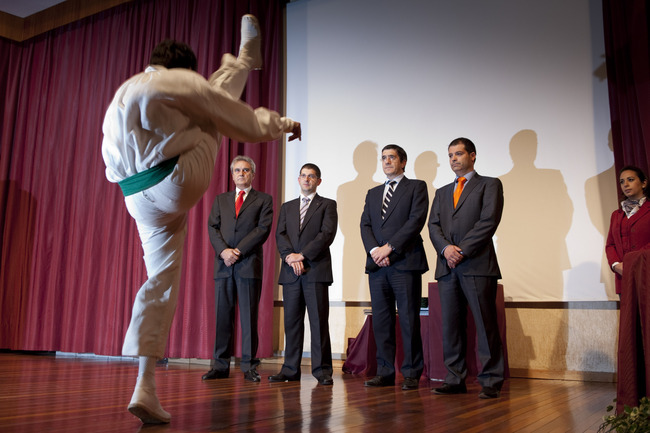 The Lehendakari encouraged young Basque chefs to take the baton from those who did pioneering work "to develop the cuisine of the Basque Country, something which sets this region apart".

This afternoon, the Artxanda Catering School awarded diplomas to graduates from this year's course. The ceremony was presided over by the Lehendakari, Patxi Lopez, who encouraged the catering sector to base its efforts to combat the current economic crisis on "innovation, competitiveness and internationalisation".

The Lehendakari, Patxi Lopez, defended the search for "excellence" in all the areas that make up the catering sector, and especially in the work to be done, as of today, by the young Basque chefs who received their diplomas from the Artxanda Catering School of Bilbao. The Lehendakari encouraged the young graduates to take the baton from the pioneering chefs of three decades ago and to take "the reins of a sector that is today one of the main signs of identity of the Basque Country and one of our major attractions for those who visit this region".

The Lehendakari, Patxi Lopez, presided over the diploma ceremony at the Higher Catering School of Artxanda. The ceremony was attended by the writer and food critic, Jose Luis Barrena, winner of the National Gastronomy Prize for his work in the field of communications, who offered a talk on the new outlook in the catering sector.

In his speech, the Lehendakari pointed to the difficulties faced by the Basque economy. "No one denies it", he recognised and encouraged sectors such as the catering industry to confront the situation by diversifying its activities. "As an industry and as a generator of employment and due to its special relationship with leisure and tourism, gastronomy forms an essential part of modern Bilbao and for this reason we are working to build a compassionate, sustainable and competitive Basque Country", he added.

In this sense, Lopez prescribed a recipe that combines 3 ingredients: innovation, competitiveness and internationalisation" to which he added the diversification of activities in order to guarantee "leadership". The Lehendakari praised the role played in the sector by the Catering School of Artxanda, as "the recipe for success lies in the training and professionalism of this sector".  "The training offered here can be used, furthermore, in order to promote gastronomy, which is the factor that sets the Basque Country apart", he emphasised.