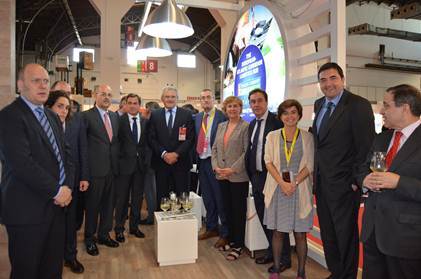 Basque Country Logistics is the new brand created by the Basque Government and the Bilbao and Pasajes port authorities, supported by the Chambers of Commerce, companies and the Basque logistics cluster, in order to lead initiatives, alliances and collaborations and to promote the transport and logistics potential in the Basque Country as a door to the Iberian peninsula in South West Europe.

As explained by Oregi “the Basque Country has made a great deal of effort to define and construct infrastructures, and the time has come to highlight its value in a coordinated manner, accentuating its multimodal nature and generating synergies between them within the big European networks, making the most of our biggest asset, i.e. our excellent geographical position at the entrance to the peninsula on the European Atlantic corridor.”

Oregi reminded those present that Spain’s Atlantic coastline constitutes, with the Mediterranean, the longest in Europe, encompassing 21 regions – including the Basque Country – 2,500 km of coastline and 21% of the EU surface. The population of this corridor is some 80 million, almost 12% of the EU, including the area from the Netherlands to Scandinavia.

“Today our location, the infrastructure network, connectivity, investments, multi-modality and companies in the sector make the Basque Country a true logistics platform between the Iberian Peninsula and the rest of Europe, an asset on which the Basque Government is now turning the spotlight, under the Basque Country Logistics brand name, to increase competitiveness and efficiency given that it represents the sum of our coordinated and dimensioned logistics potential to meet each and every industrial and commercial need as regards loading, transport and distribution.”, said Oregi.

According to the Minister responsible for transport and logistics in the Basque Country, “the position of the Basque Country in the core network of the TEN-T and its doors to the Atlantic facade, mean that it stands at the doorway into and out of Europe towards America, Asia and Africa, with an integrated multimodal logistics offer. The Basque Country is an almost obligatory place of passage between Spain and Europe. Fifty percent of all road traffic passes through the Basque Country and as far as rail is concerned, the new Basque ‘Y’ will quite clearly increase today’s participation in that means of transport.”

In her intervention at the SIL Exhibition in the capital of Catalunya, where Basque Country Logistics has a stand, Oregi indicated that “the Atlantic Axis and the Atlantic Railway Corridor represent 25% of the euro zone population and 35% of its GNP, hence the strategic importance of this axis for all Europe. The Basque Country stands in one of the priority axes of the TEN-T, in a particular geographical situation that represents an opportunity, but also a responsibility, to live up to the expectations of its importance as a privileged location in Europe.”

“Not only is the Basque Country essential in the rail and road networks, but also as regards sea transport. The maritime motorways bring added value to the position of the Basque Country as a link in trans-European routes, not forgetting connections with the rest of the world,” she said.

“The TEN-T are also an objective for the Basque Country” explained Ana Oregi. “We must make the grade. The Basque Country has a modern transport network. For years this has been a priority in our Country. In this respect we have the Basque Y, the network of high-capacity trans-European roads, the logistics platforms and continuous improvements to our ports. The Basque Country has been adapting for many years to the competitive economic environment and interrelating with the TEN-T represents an incentive in this policy.”

The three major Basque challenges as part of the TEN-T and as a result of the Connecting Europe strategy priorities are modal integration in order to increase the rail and sea quota; interoperability and reduction of the border effect, particularly as regards the railway system, given that Spain and the rest of Europe have until now had different track gauges.

In the Minister’s opinion, “the Basque Country is getting ready to face the logistics and transport challenges of the 21st century and has therefore launched a strategy based on the concept of “working together” to lend added value to our infrastructures: to progress from a list of platforms, ports and airports to an integrated, interrelated network at both regional and European level.”

The mission of Basque Country Logistics is to take an instrumental position in achieving a multimodal, multipolar logistics offer as an enormous hub for articulating the flow of goods from the Iberian Peninsula with the European Union, incorporating intercontinental traffic from Africa and South America. This takes the shape of three prevailing modes of material transport: rail, sea and road, with a tremendous intermodal vocation.

Thus, the BCL has Bilbao as the biggest Port in the Basque Country, on the Cantabrian coast, included in the European core network, and a maritime entrance and exit from and to the world from South West Europe. Pasaia is only a step from the border; well communicated by road and rail, it leads the way in Spanish car transport figures, is highly specialised, and has great expectations tied to development of the new Basque railway network.

The Basque Country holds an outstanding position in the field of air haulage. Added to its strategic location are installations offering excellent services as regards the air transport of material at Vitoria-Foronda, a top level airport worldwide for transporting material with excellent tarmac and overland services capable of meeting the needs of any operation.

“The fact that companies such as DHL, TNT and Fedex use Vitoria-Foronda demonstrates the capacities of the Airport. One of the objectives of the Basque Government is to make the most of the synergies generated between airports in the Autonomous Community (Bilbao, Vitoria and San Sebastián) in order that all three – Bilbao-Loiu, Vitoria-Foronda and San Sebastián-Hondarribia – will operate as a single airport with three terminals” said Ana Oregi.

As far as Basque logistics platforms are concerned, Arasur is the biggest platform in the South of the Basque Country, given that it has sufficient surface and is perfectly communicated with the road and railway networks added to its position as a platform linked to the Port of Bilbao. Very near here is Jundiz, the strategic location in the Atlantic Trans-European axis of a high-capacity multimodal platform perfectly situated for new developments including the rail highway and the intermodal train & road exchange. The Pasaia-Irún platform, also a new Trans-European rail network, enjoys synergy with the Port of Pasaia in eliminating cross-border bottlenecks and is a catalyst of intermodality.

“The new Basque railway network is the Basque contribution to the Trans-European rail transport network”, according to Oregi. “The Basque Y brings the Basque Country into Europe, overcoming the track gauge problem and making us part of the European rail network as far as transporting material is concerned. It is a line for the mixed transport of travellers and materials, which meets sustainable transport requirements.”

As regards roads, the Basque Country has a high-capacity motorway and highway network suited to meeting the needs of the Trans-European axis in which it stands and of access to the Country’s major logistics installations.

“The pooling of our strong points: situation in Europe, infrastructures and a thriving logistics and transport sector, with the unequivocal backing of the Basque Government, means that Basque Country Logistics can bring the added value of collaboration to what we already are and to what we hope to become” resumed Oregi.

“Basque Country Logistics starts today; it will head initiatives, alliances and collaborations with all public and private bodies so wishing in order to achieve excellence of the Basque Country Transport and Logistics System in its physical environment, which is the Iberian Peninsula and Europe. All of these capacities would be difficult to develop and optimise without close collaboration between the Basque public administrations and private companies. And that’s something of which the Algeposa Grupo and CAF are highly aware.”

Within Basque Country Logistics, the institutions, and the Chamber of Commerce of Álava offer VIAL-Vitoria Álava Solución Logística, a project combining all specialised infrastructures and industrial estates.

“The work of all people, their initiatives and contributions, are the road to development of the Basque Country logistics and transport. We collaborate and we compete. The Basque Country has made a great deal of effort to define and construct infrastructures, and the time has come to highlight them in coordinated fashion, placing the accent on their multimodal character and generating synergies between them within the big European networks. To do this, we have created the Basque Country Logistics brand” concluded the Basque Government Minister of Environment and Regional Policy, Ana Oregi.