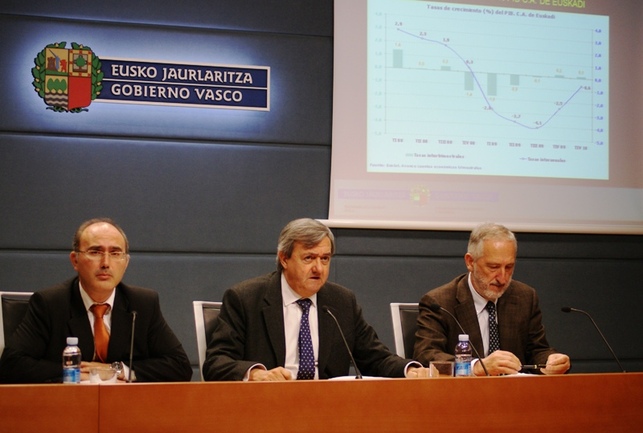 - According to inter-quarter results, which provide a better idea of the current situation, Basque GDP has increased by a tenth and shows a positive trend for the second consecutive quarter.

- During the first quarter of 2010, the improvement accelerated with an inter-annual drop of 0.6% with respect to the -2.5% of the previous quarter.

- Once again, Alava has the best inter-quarter results, with an increase of 0.4%, while Guipuzcoa now has a positive inter-annual growth of 0.3%.

- On the demand side, the figures highlight an improved trend in private consumption and investment, while the contribution of the current external balance has been positive at just under one percentage point.

- The employment rate is showing signs of recovery and the inter-annual decrease (-1.9%) is considerably lower than that recorded in previous quarters (-3.5% average in 2009)

- The data published by Eustat confirm the predictions of the Economy Department of the Basque Government. Its forecasts predicted positive GDP figures for the second quarter and an average growth of 0.5% for the year as a whole.

In the first quarter of this year, Basque GDP showed a positive growth of 0.1%, this being the second positive inter-quarter figure following four consecutive quarters of negative growth. This inter-quarter variation was also 0.1% for the Spanish economy and 0.2% both for the European Union-27 and for the Euro-16 Zone.

According to the estimations of the Basque Statistics Institute (Eustat), the inter-annual rate was -0.6%, which is better than the forecasts of the Economy Department of the Basque Government. It represents a major improvement in the inter-annual figures of almost 2 points (from -2.5% to -0.6%), allowing an acceleration in the improvement shown in the last quarter of 2009.

According to provinces, Alava reported the best results with a growth of 0.4% with respect to the previous quarter, while Guipuzcoa now shows a positive inter-annual growth of 0.3%. The Basque economy as a whole is expected to show positive inter-annual rates in the near future and current data support the belief that GDP will report positive results during this, the second quarter of the year.

On the supply side, it is interesting to note that the VAT on services now shows positive levels following three months of decreases and that this has been achieved without being based on services linked to the administration but on market services which have overcome four months of decreases to stand now at 0.6%. This improvement is due to the good results obtained in economic areas such as retail and tourism, the indicators for which are now showing positive increases. Non-commercial services also recorded positive results but little variation is observed following three consecutive years with increases of approximately 5%.

Industrial VAT has reduced considerably the drop recorded in the previous quarter from -5.9% to -1.6%, due largely to the increase in demand for intermediate goods. Construction provided the worst surprise of the quarter, as it has shrunk to a greater extent than that expected. Information on the residential sector suggests a stabilising tendency and therefore the decline in this sector must be attributed to civil works projects.

From the demand viewpoint, the improvement in the trend in private consumption is noteworthy, showing signs of recovery while the increase in public consumption was limited to 0.5%. Investment has not suffered as much as in previous quarters and signs of recovery can be seen in some productive investment indicators.

Some improvement can be seen in foreign markets as well as a considerable recovery of the volume of transactions with other countries. As a result, exports and imports have only fell by 1.7% and 3.5 cents respectively, compared to the inter-annual decreases of about 15% in 2009. This is an indication that the contribution of the current external balance to the growth of GDP has been positive and amounts to almost one percentage point.

In employment terms, the inter-annual decrease (-1.9%) is considerably lower than the one recorded in previous quarters (-3.5% average in 2009) and is consistent with the improvement shown on a monthly basis in the numbers of people signing up for Social Security.