Oregi: “We must mitigate climate change that will increase the frequency and severity of extreme events” 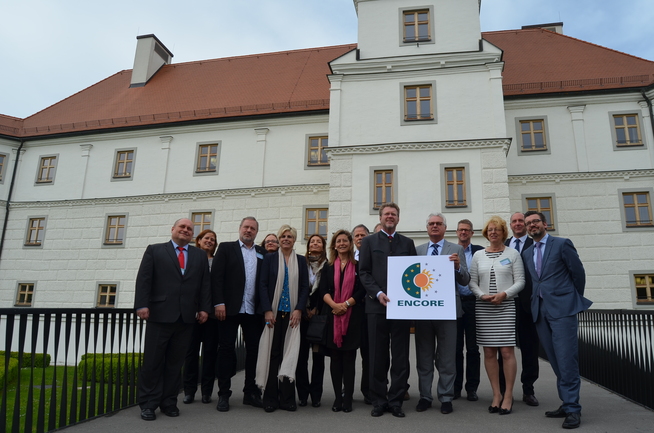 The Minister for the Environment and Territorial Policy of the Basque Government, Ana Oregi, considers that “above all, the Basque strategy against Climate Change must concentrate on mitigating its effects due to the complexity and uncertainty it causes and the long-term nature of the impacts. “We must foresee the effects of global warming in each activity that we develop in the territory” she commented this morning in Munich.

Ana Oregi is taking part in Encore´2014 today, a conference of regional European Environmental ministers that is being held in Baviera, intervening in different workshops and debates alongside the under-secretary for Territorial Policy for the Basque Government, Izaskun Iriarte, in a seminar presided over by the Bavarian Environmental Minister, Marcel Huber.

In addition to Marcel Huber the following people are intervening in the conference: Laurentien van Oranje, chairman and moderator; Ida Koppen, Kathrin Müller-Menrad, Gisela Oswald from the expert workshop, Luc Bas director of the IUCN Brussels Office, Henk van de Boer de Drenthe, Netherlands, Aurel Ciobanu director of the Directorate for Implementation & Governance  of the European Commission, Ben Ferrari The Climate Group, Monika Kratzer, Stephan Pauleit, Professor of the Faculty for Strategy and Management of Landscape Development, Ernst Rauch, Leader of the Corporate Climate Centre of Munich, Peter Schwarzenbauer, Member of the Executive Board of the BMW Group and Jürg Senn, Head of the Energy Agency of Liechtenstein.

“We are strategically focussing on everything related to climate change” indicated Oregi, “and it is clear that the first thing that we must do is to mitigate its effects”. According to the Minister from the Basque Government “In 2012 the Greenhouse Effect Gas emissions in the Basque Country rose to 20,787 ktCO2e, with a 1.1% increased compared to 1990.”

“Climate change will increase the frequency and severity of extreme events that we already know about. It is a global effect and each evolution or variation in the climate behaviour will generate unusual meteorological and physical situations in every corner of the planet” Oregi commented in Baviera.  “In addition, gradual alterations will occur with other climatic variables such as rainfall, average temperatures or the rise in the MSL. These effects will directly influence our lives”.

In Munich Oregi has described many different “global emission settings and increases in CO2 levels and concentrates; different global climatic models in “forced” 250x250 kms climatic projections with each of the emission scenarios; regional climatic models – in 12.5x12.5 km projections, also associated to each of the emission scenarios and that are a reflection of these situations of droughts, flooding, heat waves or variations in air quality”.

“Climate change is one of mankind’s greatest challenges and a highly complex question due to the uncertainty it generates and the long-term nature of the impacts” explained the Minister Oregi at the centre for the conference in Hohenkammer-Munich.

The Basque Strategy for Climate Change

The Minister from the Basque Government has set forth the characteristics that the new climate change strategy being outlined by the Basque Government will have until 2030 with “an integrated view of the questions of mitigation and adaptation, an active role for all the decision-making levels, particularly in the International field, a suitable use of the existing scientific and technical knowledge, including the need to start up observatories on the effects of climate change in the different areas where they are generated, a greater representation of the cost-effective options, the impacts and exploitation of the potential for generating economic activity, the effort to innovate the policy instruments, special attention to the participation mechanisms and the development of the concept of co-responsibility of all the agents of interest”.

“A good strategy for climate change in the Basque Country also offers opportunities with a road map towards a low carbon economy. There might be an economic yield and competitiveness associating climate change with the modernisation of the production fabric, the creation of wealth and employment, a greater efficiency in the use of resources and energy, the promotion of the “Basque trade mark”, an improvement in the skills for exports, the development of innovating products to make the consequences of climate change profitable, an increase in the reputation of Basque companies and the exploitation of external funding sources”.

The Basque Country in a good position

According to Oregi “at Encore, the European countries and regions exchange information and experiences to prepare our sustainable development policies for energy, the environment, prevention and actions regarding climate change. Here the best practices are compared and analysed amongst the regional governments, along with experts from the business field. The Basque Country, with a rich natural heritage and also with a strong industrial component knows how to prevent situations within its position in the most advanced part of Europe in this field”.

For the Basque Minister for the Environment and Territorial Policy, (as the members of the Regional and Federal Governments are considered in the Union), a top priority is to “gain access to a solid network of specialised contacts with other regional governments and to influence in the future policies through the participation in this network in technical discussions and negotiations and through the annual meetings with the Commissioner for the Environment and the Climate.”

“We are creating links with regions and other organisations with common interests and experiences that help with the making of bilateral or multilateral agreements and here the contribution of our government to a low carbon economy is recognised and projected internationally, through the participation in international events and work groups, often in sessions running parallel to the key international negotiations. Through the network, the benefits of our region’s visibility and our country’s achievements are multiplied” Ana Oregi emphasises.