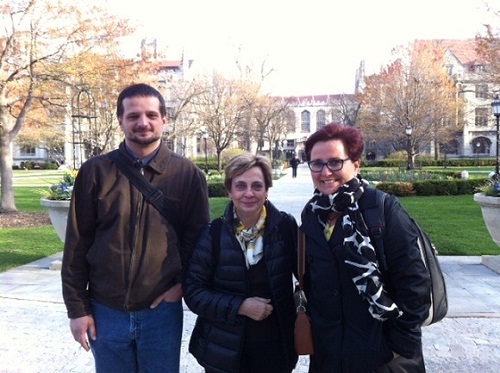 Download photo
Embed image
Karlos Arregi (Linguistics Department, University of Chicago); Miren Azkarate, senior professor at the UPV and professor of the Koldo Mitxelena Chair , and Mari Jose Olaziregi, Director for the Promotion of the Basque Language at the Etxepare Institute Source: Irekia

In Frankfurt, Jon Wood will study the work of Chillida and the places and spaces of contemporary sculpture in two seminars

Purpose of the chair: this chair seeks to expand Basque Studies to North America. Part of the Humanities Division at the University of Chicago, this chair hosts a leading Basque professor to give seminars and talks  on Basque humanities during four months.  Created in 2012.

The Revival of the Basque Language:its Language Policy and Language Planning

The main purpose of this research course is to analyse the policies to promote the Basque language. The Language Policies and Language Planning carried out in Euskal Herria, the use of the Basque Language, the beliefs regarding the language, its corpus and the steps taken to improve the prestige of Basque will be studied. Special emphasis will also be paid to the evolution of the unified Basque language, from 1968 to the present, to the work to harmonise different areas - pronunciation, morphology, lexicon -, to the updating of the terminology and to the corpus and dictionaries to be found online. The programme will also analyse the measures introduced in education and the media and public entities to promote the use of the Basque Language.

Purpose of the chair:  to foster the specialised study and research into Basque art. The Chair is based at the History of Art Institute at the Goethe University Frankfurt and the classes are part of the Curatorial Studies run by the same Institute. The Frankfurt Art Library also has the full bibliography of the artist in a special section, making it a benchmark for researchers of his work. Each year, the chair invites a leading researcher to give a seminar or series of talks. The faculty will also run a leading international symposium every two years on the work of Eduardo Chillida. Created in 2013.

Sculpture and Display:from Chillida to now /

The places and spaces of Contemporary Sculpture (Chillida - Cragg)

Jon Wood, the international expert, will run two seminars under the aegis of the Chair. The starting point for both seminars will be Chillida’s work.  On the one hand, the sculpture and different exhibition methods will be studied and, on the other hand, the places and spaces that contemporary sculpture will be analysed, with a special emphasis on the works of Chillida and Cragg.  A lecture open to the public will be given at the end of the programme.

Jon Wood studied at the Courtauld Institute of Art and works at the Henry Moore Institute, where he coordinates the research programme and curates exhibitions.  He is also an Associate Lecturer at Leeds University,  where he teaches on the MA in Art History. He works on twentieth-century and contemporary sculpture, with a particularly research interest in the artist’s studios and the artist interview. In 2007, he compiled and published the Modern Sculpture Reader, an anthology of twentieth-century writing on sculpture, with Alex Potts and David Hulks. He co-edited the two volume Sculpture in 20th Century Britain (2003).