The Basque Government bestows the “Lagun Onari” distinction upon Selma Huxley Barkham, researcher into Basque presence in Newfoundland and Labrador 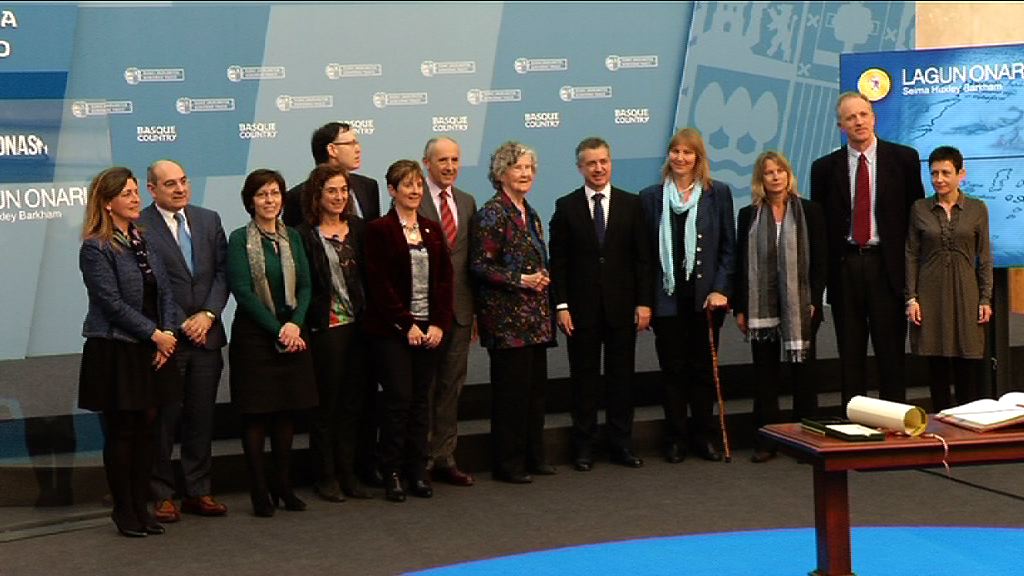 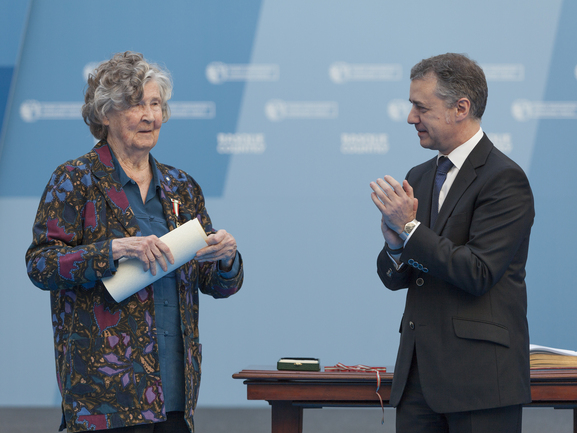 The Basque Government has awarded the Lagun Onari distinction to the researcher of Canadian and British origin Selma Huxley Barkham, who has dedicated her life to study and research into the presence of Basque fishermen in Labrador and Newfoundland between 1530 and 1700, where she discovered the existence of several whaling bases and threw light onto an unknown part of Canadian and Basque history.

Lehendakari Iñigo Urkullu presided over the ceremony, alongside the members of his government, at which the researcher received the distinction. Selma Huxley Barkham was accompanied by her children Michael and Serena Barkham Huxley, and by a group of friends and relatives. Also present was Lorraine Choquette, Political and Public Affairs Officer at the Canadian Embassy in Madrid.

Addressing the guests, Lehendakari Iñigo Urkullu said “Selma Huxley’s helm has marked new routes to the Basque Country. Her work recalls us of something that has strongly marked our character: just like those whalers and cod-fishermen, we are capable of tackling all objectives with determination and without fear of storms or difficulties, certain that we will succeed in making a reality of the projects we undertake.”

Urkullu continued: “Selma Huxley Barkham is much more than a best friend of the Basque Country; she is a fine example of fondness for and commitment to a history and tradition she has adopted as her own. The Lagun Onari distinction recognises that dedication and effort.”

For his part, Michael Barkham, Selma Huxley’s son, highlighted his mother’s work and recalled how she arrived to the Basque Country in the seventies with her four children, the youngest of whom was only 11 years of age.

The "Lagun Onari" title honours individual people or bodies which, despite not holding the political condition of Basques, have, in going about their activities made an important contribution to the benefit of the Basque Country, its economic promotion, and to the historical and cultural dissemination of all things Basque beyond our borders.

In addition, the "Lagun Onari" distinction can be awarded to individual people bodies of recognised prestige in the social, cultural, economic or political fields, thereby naming them friend of the Basques for having reflected in their trajectory virtues and values highly esteemed by the Basque People down through history.

Selma Huxley Barkham (London, 8th March 1927) is a historian who specialises in the maritime history of Canada and the Basque Country. In 1972, as an independent researcher, she moved to Oñati, in the Basque Country to go about archival research into Basque presence in Newfoundland and Labrador on Canada’s Atlantic coast in the 16th and 17th centuries. Thanks to her work, she was able to make important historical and archaeological discoveries.

The researcher came across documents with which she wrote a rather poorly known chapter in Canadian and Basque history: the small cod-fishing and whaling fisheries in Newfoundland, particularly in the 16th century. She discovered the existence of a 16th century Basque whaling industry in Red Bay, Labrador, its whaling ports, archaeological remains of their bases, and the presence of Basque galleons sunk in the aforementioned ports, including the San Juan (1565).

In the archives, Huxley found three extraordinary manuscripts that had been written in the coast at that time: a sale of small boats known as chalupas (1572) and two wills (1577 and 1584). These are the oldest original civil documents written in Canada. Selma learned from the documents that in some of these ports there had to be remains of the presence of Basque whalers, in and out of the water. Based on her research, Huxley organised an archaeological survey expedition to southern Labrador in summer 1977.

She explored several ports up and down the coast, discovering archaeological remains of Basque whaling bases, including Red Bay, and thereby confirming her historical work in Europe. Among others, the expedition was joined by the archaeologist James Tuck from the Memorial University of Newfoundland.

Among the manuscripts found by the researcher are some that refer to the sinking of several 16th century Basque whalers in ports of the Great Bay, the present-day names of which she had identified on the Labrador coast: one from Pasaia (1563) in Los Hornos (Pinware Bay), the Madalena from Mutriko (1565) and the María from San Sebastián (1572) in Chateo (Chateau Bay/Henley Harbour), and the whalers San Juan (1565) and the Madeleine (1574) in Buttes (Red Bay).

Thanks to her findings, in 1978 a team of underwater archaeologists from Parks Canada found several shipwrecks of 16th century whalers in Red Bay and Chateau Bay. Huxley continued to work on her historical studies while excavations continued on dry land and underwater directed by Tuck and Grenier in Red Bay. The area was declared National Historic Site of Canada in 1979 and World Heritage Site by UNESCO in 2013.

In 1981 the Basque Government honoured Huxley with the Order of Canada, its highest award, for having made “one of the most brilliant contributions, in recent years, to the history of a nation”. One of the ancient whaling ports discovered and documented by her, today’s Red Bay, in Labrador, was declared Natural Historic Site of Canada and World Heritage Site by UNESCO in June 2013.

The town of Red Bay in Labrador has become the main exponent of Huxley’s work, with a research centre and museum dedicated to her. Her son, Professor Michael Barkham Huxley, is another lover of the Basque Country and a great connoisseur of Basque history.