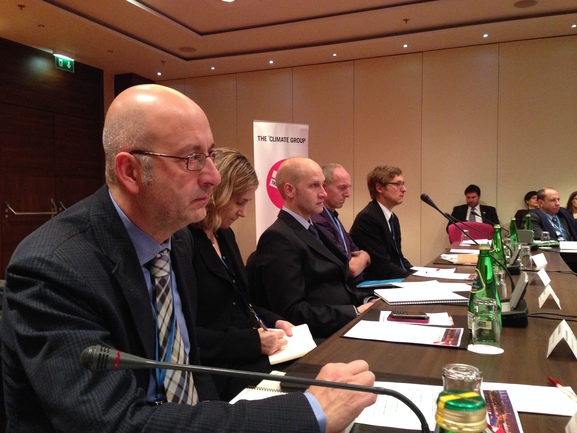 • Josean Galera, the Basque Government's Deputy Minister for the Environment: "It is important that the funding of projects to mitigate and adapt to climate change is being discussed for the first time".

• The Basque Country is participating in The Climate Group with the White House Head of Environmental Quality, Nancy Sutley.

The Basque Government's Deputy Minister for the Environment, Josean Galera, believes that it is very important that "the funding of projects to mitigate and adapt to climate change is being discussed at a world summit for the first time". The Climate Change Conference is currently being held in Warsaw. The Basque Government, represented by the Deputy Minister for the Environment, Josean Galera, and the Director for the Natural Environment and Environmental Planning, Amaia Barredo, is taking part at the 19th session of the Conference of the Parties (COP19).

"We have met with The Climate Group and NRG4sd, networks to plan future lines of work to be presented in Paris in 2015 and to identify the tasks to be undertaken in the different working parties." The Basque Country will be involved, with the regions of Brittany, Quebec, Scotland and Wales, among others, in the Green Economy group," stressed the Deputy Minister for the Environment.

Within the framework of The Climate Group meetings, time was organised to meet with Nancy Sutley, Head of Environmental Quality at the White House. The Basque representative stressed the desire to work to fight climate change and its consequences, as the summit had been given the example of California as an advanced state with a climate change plan involving both public and private stakeholders.

As Galera pointed out, "in terms of the European Union, it was emphasised that Europe has exceeded its commitments for funding for developing countries (over 7,340 million dollars). Furthermore, the EU is committed in this new scenario to a low-carbon economy and the European Investment Bank has amended its funding policies towards reduced carbon projects. Public funding must be a lever for private funding, because the funding for projects to tackle climate change increases with private-public partnership," he concluded.

"It is the first time that international ministers have reflected on funding project to mitigate and adapt to climate change. The discussion emphasised increasing public funds, guaranteeing the durability of long-term investment, traceability mechanisms, along with a clear commitment to balance financial support (50%-50%) both for adaptation and mitigation projects," explained Josean Galera.

When opening the sessions, the UN General Secretary, Ban Ki Moon called on the parties to reach agreements at the COP 19 regarding a great emphasis in public investment on fighting against climate change and recommended that there should be no restrictions on it as the effects will be devastating.

The Basque Government, through its representatives, is working on an international declaration with the other regions in the aforementioned networks, where it proposes "to highlight the importance of local and regional government in the fight against climate change due to their role in managing and financing measures and given their proximity to the citizenry".

Regional commitment
In this text, the regional governments declare their commitment to adopt the decisions of the agreement in 2015 when they will meet in Paris. The declaration also stressed "the need to involve private-public stakeholders in mitigation actions and highlights that "regional governments are at the cutting edge and are highly experienced in the application of mitigation policies in the spheres of mobility, agriculture and forestry, energy efficiency and waste policies".

"Urgent and ambitious measures have to be taken. In many countries, local and regional governments have sufficient authority, knowledge and experience in the taking of decisions that, if well targeted, may be a significant contribution to greater implementation of policies. We are also addressing adaptation by means of measures in the water, coastal management and health sectors, and reducing the risk of disasters. It is therefore important to drive the improvement of the application of the mechanisms to deal with the loss and damages caused by climate change, by ensuring that measures are adopted to tackle adaptation in more vulnerable countries," said Galera.

In the opinion of the Deputy Minister, the climate summit in Warsaw is an opportunity for the governments to make progress in clarifying the commitment to reduce the issues and increase resilience, with the aim of not exceeding a 2ºC rise in temperature, by seeking the most effective way to reserve the trend of increased emissions. "Institutional decisions have to be taken that are aimed at developing nations by launching the Green Fund for Climate and the Adaptation and Technology Committee. The Warsaw meeting has to urge the ratification of the second commitment period of the Kyoto Protocol, according to what was agreed in Doha last year," Galera pointed out.