Lehendakari Urkullu officiates the presentation of the Michelin Red Guide 2014 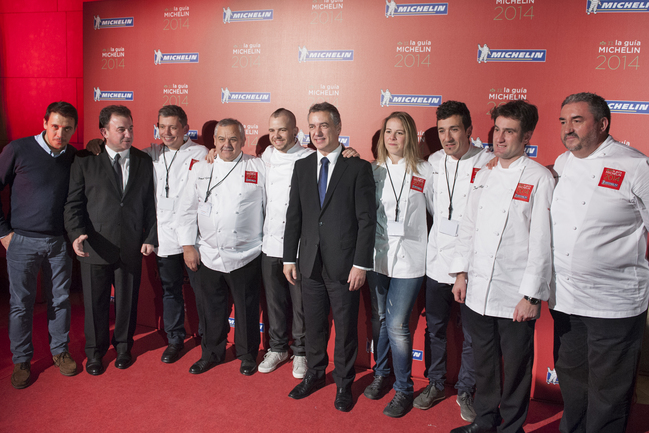 Lehendakari Iñigo Urkullu, the Basque Premier, stressed that he has always associated" "kitchen work" with positive attributes, such as perseverance, team work and proximity. "Ingredients", all of which are recognised by the Michelin Guide. Urkullu recalled that the Basque Country is a country known for its culinary heritage, something that comes from the family culture, love of cooking, but also from the "passion and eagerness to improve of its professionals," he emphasised. This recognition of Basque cuisine is, according to Urkullu, "the business card" of the Basque Country around the world and the Lehendakari went on to add that it is an important point to showcase the Basque Country abroad.

The Michelin Guide for Spain and Portugal 2014 unveiled its longed-for stars, the recognition of the work of the best restaurants, at a special event. The Lehendakari was at the Guggenheim Museum Bilbao, the venue chosen for the event attended by over 300 guests. The stars of the stoves were there, as around 30 chefs, including all of those awarded two and three stars by the "Red Guide", were at the gala. The Basque Government's Minister for Economic Development and Competitiveness, Arantza Tapia, the Mayor of Bilbao, Iñaki Azkuna, and the Bizkaia Provincial Council Chairman, José Luis Bilbao, and not forgetting the World Director of the Michelin Guide, Michael Ellis, were also at the event.

As one novelty for Basque chefs, Martín Berasategui was awarded a second start for his "Abama" restaurant in Tenerife. The chef from San Sebastián thus has seven stars and has become the Michelin Red Guide's most prestigious chef in Spain.
One restaurant has made it on to the three-star list in the Michelin Red Guide 2014. This distinction has gone to the DiverXO restaurant, run by Chef David Muñoz, in Madrid. . Arzak, Pedro Subijana at "Akelarre", Martin Berasategi at his Lasarte restaurant, Carme Ruscalleda at "Sant Pau" , the Roca brothers at "El celler de Can Roca", Quique Dacosta's restaurant and the "Azurmendi" of Eneko Atxa have kept their three stars. This new incorporation means there are now eight restaurants with three Michelin stars in Spain.

Culinary yardstick
In 1900, the guide was launched with the aim of being a manual for drivers and cyclists, and free copies were initially distributed through garages. In 1926, the guide introduced the stars as a system to rate the restaurants. A "culinary yardstick": one star or "a very good restaurant in its category", two stars or "excellent cooking and worth a detour" and three stars or "exceptional cuisine and worth a special journey".