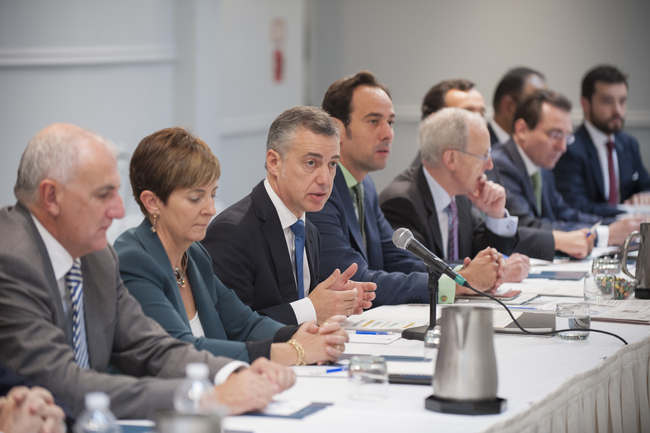 Official trip to the United States

Lehendakari Iñigo Urkullu, the Basque Premier, told the representatives of a score of Basque countries operating in the United States that the Basque Country is facing the future with "new hope and excitement", referring to the end of terrorism. Regarding the economic crisis, he indicated that this year could see the end of the recession with growth and jobs being created in the following two.

During the first event on the program for the official trip that has taken him to the United States, the Lehendakari held a meeting in Washington with a representatives of the Basque business community working in the United States, which was an opportunity to exchange views. The Basque Government’s Minister for Economic Development and Competitiveness, Arantza Tapia, who is accompanying the Lehendakari on this trip, also took part in the meeting.

He went on to stress that terrorism has particularly been a burden on the people, but "it also has hit our image in the eyes of the world and our economic opportunities". However, he pointed out that the Basque Country is facing the future with new hope and excitement.

Emerging from the recession and creating jobs

Regarding the economic crisis, Iñigo Urkullu indicated that the Basque Country is bottoming out and 2014 may see the start of growth and unemployment being contained, with jobs created in 2014. He has based this on different positive indicators including fiscal consolidation, the good inflow of revenue and the possible record year in exports.

When it came to the goals of his trip of the United States, the Lehendakari explained that the visit is aimed at “listening, learning about the reality of the experience, sharing and focusing our decisions”. He also indicated that the Basque Government has many external programs in place, underpinned by the principle of flexibility and the ability to adapt. “We are a small country, but that is an advantage, as we can implement participative decision making rapidly and from a position of close proximity,” he stressed.

He likewise indicated that the Basque Country was committed to supporting business and industry, by means of what he called the 4Is economic strategy, that is, Investment, Industry, Innovation and Internationalization.

He also recalled the effort that the Basque Government has made regarding fiscal consolidation and predicted a positive evolution in tax revenues in 2014. He also encouraged companies to continue to export, and referred to the excellent record export rates of Basque companies.

For her part, the minister Arantza Tapia stressed the Basque Country’s tax system of its own as a tool that has made the industrial model possible. She also defended the Basque model of competitiveness, the clusters system, and she recalled the support that the Basque Government is offering companies through guarantees, financing working capital, and internationalisation programmes. The Basque Government, Arantza Tapia said, “promises to continue to help companies to be innovative and competitive”. “It is vital that we all work together for the Basque Country”, she concluded.

After the meeting with the business community, the Lehendakari and Minister Tapia attended the signing of a contract between Iberdola and Gamesa, which will enable the setting up of the wind farm with the highest output wind park in the United States.

“Urkullu expressed his satisfaction with the signing of a contract between two Basque companies and described it as “enormous satisfaction”, the fact that although it is a small country that cannot produce energy, it has two companies like Gamesa and Iberdrola established in the United States that are carrying out projects of this size. The Lehendakari thanked Iberdrola and Gamesa for providing a benchmark in innovation and internationalisation

For their part, the signatories thanked the Government and the Lehendakari for their presence and support.