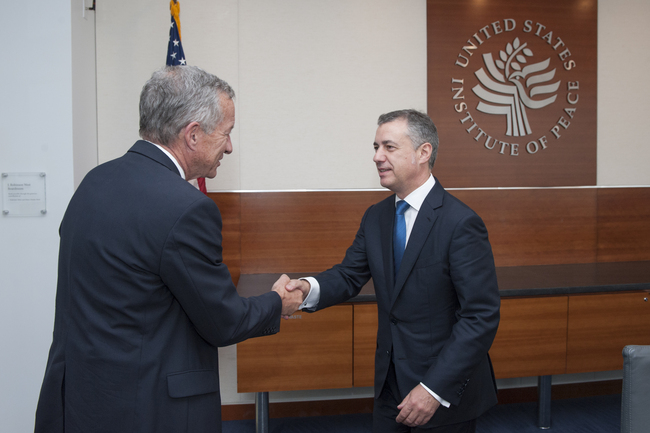 Lehendakari Iñigo Urkullu, the Basque Premier, has today presented to the United States Institute of Peace the Coexistence and Plan  put forward by the Basque Government in June and which is currently  at the stage of incorporating the contributions of the parliamentary groups and the network of associations.

During a meeting with Jim Marshall, the President of the USIP (United States Institute of Peace), an institution established by the US Congress, they both analyzed the situation in the Basque Country, the new Peace scenario and also the current "deadlock" in the Peace process, two years after ETA's announcement.

The USIP President expressed his and the Institute's willingness to continue collaborating with the Basque Country in the field of Peace and Coexistence.  The Lehendakari thanked him for their support, which now dates back six years.

During his appearance before the media after the meeting, Lehendakari Urkullu explained that they had exchanged views on the Coexistence and Peace Plan, which had also been analyzed by the USIP. They both agreed that Basque society had to take the centre stage. “The solution will not come from outside, but neither should we spurn the contributions that may come from outside the Basque Country, from experience in other situations involving other Peace processes,” the Lehendakari explained to the journalists.

On the other hand, the Lehendakari also met with Julieta Valls, the Assistant Secretary of State for European Affairs at the US State Department. Their meeting covered areas such as the Basque Government’s measures to turn round the economy, the commercial relations between the United States and Europe, and the role that the Basque Country could play in the future in those commercial relations, given the possible free trade treaty between the EU and the USA. The Lehendakari also expressed his willingness “for the Basque Country to be the gateway to both continents”, which it would be "given its economic situation and economy," he argued.

The representative of the US Government expressed her satisfaction regarding the positive impact that the lack of violence in the Basque Country is going to produce on the Basque economy.

She therefore asked about the progress been made with the Peace process. The Lehendakari was able to reassure her and explain that there has truly been a lack of violence in the last two years and that there had been no signs of extortion or threats.

Lehendakari Urkullu likewise stressed that an era of opportunity was taking place in the Basque Country for the economic recovery, for the consolidation of coexistence, for a new self-government status and “to embark on a debate regarding the model of State without any type of conditioning factors,” he concluded.

The Lehendakari ended the first day of his institutional trip to the USA with a meeting with representatives of the Washington Euskal Etxea Basque club.