The 2013 programme of the New York Bernardo Atxaga Chair unveiled 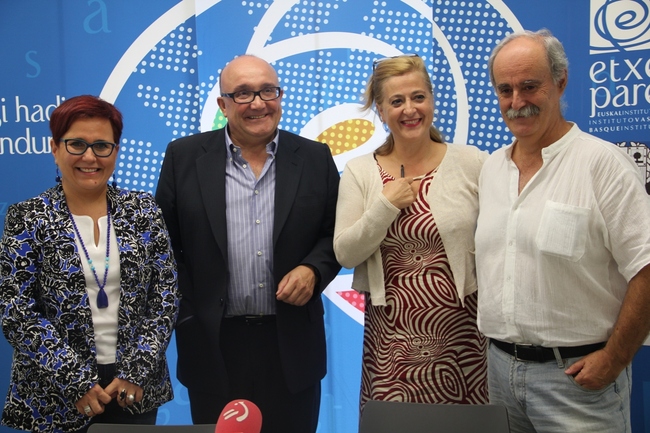 The Bernardo Atxaga Chair of the Etxepare Basque Institute at the City University of New York is yet again offering a PhD academic programme this year. Yet again, the Institute is also running an open cultural programme in New York parallel to the academic one.

"Multilingual Education: Basque and International Perspectives" is the title of the programme being run at the renowned CUNY Graduate Center from 7 to 11 October and whose guest professor will be Jasone Cenoz, a senior professor at the UPV/EHU. Multilingual Education, from a Basque and international perspective, will be the main theme of this programme.

"Languages in Contact, Communities in Coexistence" is the open cultural programme to be held on 7 and 9 October.

On 7 October, two panels of experts will meet at the CUNY. The one entitled "Basque Language and Basque Society Today" will focus on the current situation of the Basque Language and Basque Society and the speakers will be Jasone Cenoz (UPV/EHU), Jacqueline Urla (University of Massachusetts, Amherst) and Itziar Idiazabal (UPV/EHU - UNESCO Chair on World Language Heritage), and it will be moderated by José del Valle (CUNY, The Graduate Center). On the other hand, Patxi Baztarrika (the Basque Government's Deputy Minister for Linguistic Policy), Anxo Lorenzo (Secretary General for Culture, Government of Galicia) and Eva J. Daussà (State University of New York at Buffalo), will discuss "Políticas lingüísticas, políticas de convivencia: el caso catalán, gallego y vasco" [Linguistic Policies, Coexistence Policies: the Catalan, Galician and Basque Case], with Mari Jose Olaziregi as moderator.

The activities on 8 October will be held at the Black Box Theater at John Jay College of New York. On the one hand, Mark Kurlansky, the famous US author and journalist will give a lecture on the world of the Basques. On the other hand, the pianist Iñaki Salvador will pay tribute Mikel Laboa in the recital "Mikel Laboa, in memoriam", a concert organised by the Mikel Laboa Chair of the UPV/EHU, and the first joint activity of a broader project that will shortly be set out in a collaboration agreement.

This programme was today unveiled in a press conference by Aizpea Goenaga, director of the Etxepare Basque Institute, Patxi Baztarrika, Deputy Minister for Linguistic Policy of the Basque Government, Juan Kruz Igerabide, director of the Mikel Laboa Chair of the UPV/EHU and Mari Jose Olaziregi, head of the University Network of the Etxepare Basque Institute.

Aizpea Goenaga stressed the collaboration of the different entities in the project and said that she was particularly pleased with the close joint work being carried out by the Institute and The Graduate Center of the CUNY, consolidated work that is awakening real interest in Basque culture in New York. She also thanked the Mikel Laboa Chair of the UPV/EHU, the Department for Education, Culture and Linguistic Policy of the Basque Government, the Delegation of the Basque Government in New York, the John Jay College, the Ramón Llull Institute and the Government of Galicia for their contributions. She also stressed that the Institute has been involved in marking the centenary of the New York Euzko Etxea [Basque Club], by helping to round off its programme.

Mari Jose Olaziregi was entrusted with outlining the details of the chair programme, both in terms of its academic sessions and of its open culture programme. She also explained the reason behind the main theme this year: the importance of analysing the reality and the challenges that the Basque language is facing in the current multilingual society, taking into account that language is the main exponent of a society's identity.

Juan Kruz Igerabide expressed his satisfaction with this first project, in which the Mikel Laboa Chair that he heads and the Institute have worked together. He was particularly pleased because two great artists and friends, Bernardo Atxaga and Mikel Laboa, have been brought together and because it is contributing to the dissemination of both of their works.

The Basque Government's Deputy Minister for Linguistic Policy, Patxi Baztarrika, explained what his contribution to the New York programme would be with the lecture "The Case for Basque: the Paradoxes of a Paradigm". He will focus on the survival of our language and will argue that the case of Basque is paradigmatic for three main reasons: asit shows that it is possible to change the course of a language that coexists with another hegemonic language and that was in decline; due to the importance in this process of a legal framework, of an efficient linguistic policy and equipped with resources and the backing of the public; and finally because, above all, individuals and society are fundamental for success. Basque, he added, "must find its place among the languages of the world", which will showcase our society in the world.