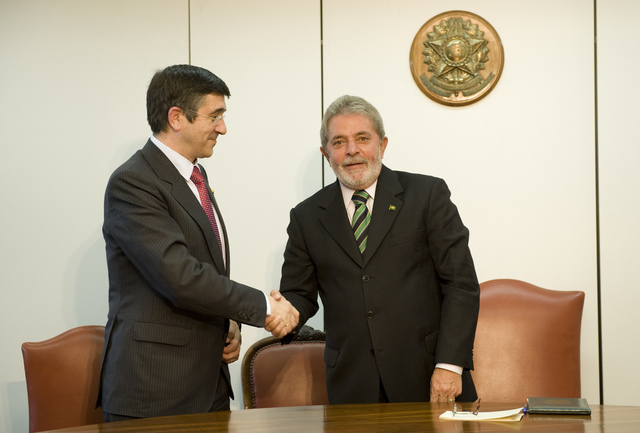 López has meeting with Brazilian president at his Office

At mid-day today, Basque regional president Patxi López met Brazil's president, Luiz Inácio Lula Da Silva, at the latter's Office in Brasilia. For more than 40 minutes, the two leaders discussed commercial and business relations between their respective communities in what was subsequently described as "a very friendly encounter." López emphasized the enormous interest of the visiting Basque commercial mission in improving contacts and relations with Brazilian firms. The underlying idea of the visit is to get Brazil to see the Basque Country as its "gateway to Europe for their firms." López invited the Brazilian president to visit the region and discover "the places where they can take the relations and contacts initiated this week much further."

The Basque business mission to Brazil led by the regional president has notched up another major success. The Brazilian president met Patxi López at the President's Office to analyze economic and commercial relations between the two communities. "Basically, what we've done is to give the Brazilians a detailed snapshots of the situation in the Basque Country, emphasizing its economic and industrial strength", said López, who also explained to president Lula the kind of "opportunities in Brazil for a powerful economy like ours."

This is the fourth day of the weeklong Basque business mission to Brazil in search of new contacts. It is also a magnificent occasion to improve Basque companies' relations with their Brazilian counterparts. Accompanying the regional president and the Basque government delegation on the trip is a large group of representatives from the Basque business world.

Basically, the business mission to Brazil led by the regional president is designed to persuade Brazilian firms that the Basque Country is their "gateway to Europe." After this visit, the idea is for Brazilian institutions and businesses to visit the Basque Country to get some first-hand knowledge of the companies in a position to provide solutions for Brazilian needs. López invited Lula Da Silva to "head a delegation of Brazilian businessmen eager to strengthen the contacts and relations initiated this week."

Beacon of the left

López said his meeting with the Brazilian president was a motive for the "deepest satisfaction." Besides discussing business and economic issues, the two men also analyzed the social and economic policies Left-wing governments should pursue. "Lula is a shining light, a beacon, showing us how to govern, grow economically and redistribute wealth to achieve equality of opportunity," López said, adding that the resources generated by economic growth should be used to "introduced policies designed to ensure equality for the underprivileged."