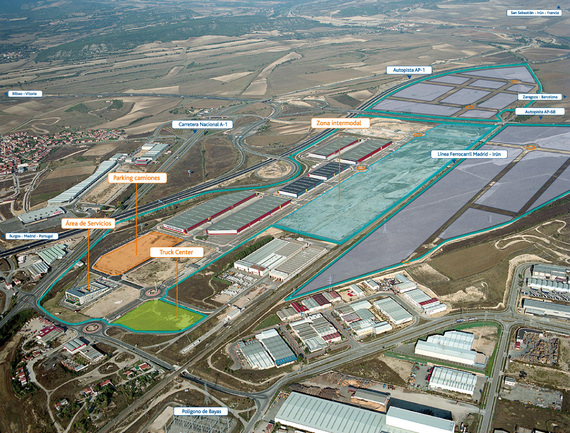 • Jundiz, Foronda, Arasur, airports, the ports of Pasaia and Bilbao, Lezo, the new Basque Rail Network and the connections of the E5 European highway make up strategic operations in south-western Europe

The Basque Government's Minister for the Environment and Territorial Policy, Ana Oregi, considers to be extraordinary the role that the Basque Autonomous Community and, with it, the Basque Country/Aquitaine Euroregion in which it is located, will play in the new peninsula logistic planning that the Ministry for Development is preparing. In a report sent to Minister Ana Pastor, Oregi points out that "the Basque Country has strived to define and construct infrastructures and it is now time to showcase them in a coordinated manner, stressing their multimodal character and generating synergies among them within the main European networks".

Oregi has proposed to Pastor that "the potentiality that the Álava logistic platfroms, the complementarity of the Basque airports on either side of the political border, the new Rail Network, the ports of Bilbao and Pasajes and the part of the E5 European route along the Basque motorways and dual carriageways" be taken into account in the work to prepare the Spanish "Logistic Plan".

On 28 February, the Minister for Development, Ana Pastor, asked the representatives of the autonomous communities to come up with coordinated logistics policies and strategies. At that meeting of the Logistics Unit set up by the Ministry, Pastor stressed the importance of a "collaboration framework between administrations in order to optimise the logistics of Spain so that they are innovative, sustainable and competitive, thus ensuring coherence and coordination".

The contribution of the Basque Government's Ministry for the Environment and Territorial Policy to the optimisation strategy of the Ministry for Development for the logistics sphere is set out in the report submitted by Oregi that details "the geographical situation of the Basque Country means that it is on the major transnational infrastructure axes, within the Atlantic Corridor, where it is a key link and as an intermodality point along the Atlantic Rim, given its accessibility to the Atlantic coast by sea along with its infrastructures. All the traffic from the centre of Spain to Europe has to likewise pass through here, which makes the Basque Country to the European Union for different autonomous communities and Portugal".

That Basque logistics potential is summarised by the railway sector in the standard gauge Rail Network by the Irún-Madrid line, which connects to Europe with a change of gauge, and by the Bilbao - Miranda de Ebro - Castejón/Zaragoza line. Bilbao-Hendaia, Bilbao-Cantabria/Asturias/Ferrol and Bilbao-León metric gauge Rail Network.
The highway infrastructures are focused on the A-1 / AP-1 Eje Madrid - Irún; A-68 Atlantic Corridor - Valle del Ebro: Bilbao - Zaragoza - Barcelona; and A-8: Cantabria Corridor Galicia-Asturias-Cantabria-Basque Country-Aquitaine. The port infrastructures are the Ports of Bilbao, Pasaia and Bermeo and the cargo airport uses the long and modern Vitoria-Foronda runways.

Using the Basque Government 2002-12 Transport Master Plan, the Basque Minister stressed the measures to empower the Goods Transport Forum, from which specific initiatives for logistic platforms have emerged. "The Basque Country has been implementing policies to set up this type of logistic infrastructures and has conducted, linked to the development of the High Speed Railway, different location studies, from the intermodality and from its territorial integration in order to establish the best location to establish a logistics platform networks".

In its contribution to the Logistics Plan that the Minister for Development is preparing, the Basque Government describes the European inter-regional cooperation policies, with special mention of the PLAE (Basque Country-Aquitaine Logistics Platform) set up in order to foster collaboration and joint ventures in both regions to drive the intermodal logistics platforms. This entity has now evolved and is part of the Basque Country-Aquitaine Euro-region, and one of its main objectives is therefore to give impetus to transport along the Atlantic Rim and the European Goods corridors.

Furthermore, the Vitoria Gasteiz government is prioritising the CFA-EFFIPLAT project involving autonomous communities and regions of the Atlantic Corridor (Galicia, Asturias, Cantabria, Basque Country, Navarra, Aquitaine, Brittany, the Do Centro Region), Port of Pasajes, ADIF and the Association of Southern Ireland Exporters, among others. Its objective is to set up a network to promote and develop a Sustainable Atlantic Goods Corridor. With a budget of 1.3 million euros, its comes under priority 3.1. to improve accessibility and internal connections of the INTERREG IV-B Atlantic Space community initiative.

Oregi has informed Minister Pastor that "it is the desire of the Basque Government for the Basque Country to become a logistics hub for international goods transport, made up by the ports of Bilbao (railway Southern Bypass), Pasaia and a network of logistics platforms based on Júndiz-Foronda, Arasur and Lezo-Gaintxurizketa". Jundiz has a total gross surface area of 2,200 x 220 metres, which gives a net surface area of 48 Ha. Located 6 km from the urban centre of Vitoria-Gasteiz, Jundiz is located at a strategic communication point with direct access to A-1 and N-1, on the Madrid-Paris E-70 European highway; and the Madrid-Hendaye-Paris Iberian gauge railway line and near to Foronda airport, which can be reached on the dual carriageway (A-1). The distance to that airport is under 2 kilometres as the crow flows.

Oregi has also proposed Arasur, a platform located in the south of Araba/Álava, next to Rivabellosa and Miranda de Ebro, as "a strategic site in the heart of one of the main industrial areas of mainland Spain and Portugal with a population over 4.5 million inhabitants in a radius of 100 kilometres". This centre has a total surface of 200 hectares and 1 million square metres of logistic warehouses located on the central axis of one of the great overland connection hubs for the traffic between Portugal, the Mediterranean, the north west and centre of Spain with Europe and is located within the catalogue of railways corridors for goods of the European Union".

"The railways connections with the Madrid-Irún-París, Lisbon-Irún-París, Bilbao-Barcelona and Madrid-Bilbao lines enable Arasur to offer the ports on the Mediterranean and Atlantic ports an ideal space to consolidate cargos and their subsequent distribution on the North African, European and national market," describes the Basque Government report. The Arasur multimodal platform is located on a double crossroads of rail and road infrastructures as the ideal point for the intra- and intermodality and is the connection point between the Bilbao-Zaragoza and Irún-Madrid Iberian gauge railway lines. With respect to road infrastructures, the A-1 AP-1 Irún - Madrid and the AP-68 Bilbao/Zaragoza roads meet and which connect the main European and Spanish capitals along the E-70 and E-80. Its location provides it with privileged access to the ports of Bilbao and Pasajes and the Basque Country overall to the Ebro axis. "Furthermore," insisted Ana Oregi in her report "it has an important Talgo factory, located in Rivabellosa".

The Lezo - Gaintxurizketa logistic platform (Gipuzkoa) is included in the Plan to Promote Goods Rail Transport (May 2011), approved by the Transport Sectoral Conference. It is included in the European Union catalogue of goods railway corridors and is located next to the Port of Pasajes. Once the Basque New Rail Network is in service, the railway lines of the Iberian dual gauge network - UIC - meet at that logistic platform, which guarantees the connection with the European Rail Network; and the Euskal Trenbide Sarea metric network, which links it to the Cantabrian coastline and León.

As regards the railway infrastructures, Lezo-Gaintxurizketa has a link to the Paris-Madrid highway (N-1 and A-8/AP-1) to the A-8 Motorway to Bilbao, Cantabria and Asturias; and access to Navarra and Valle del Ebro from the San Sebastián outer bypass and A-15.

"Lezo would be a triple gauge (Iberian, UIC and metric) railway intramodal transfer point, it would improve the traffic of the port of Pasajes, it would guarantee the compatibility with the development of the sustaianble rail transport, being a contributing factor in the regeneration of the Bay of Pasaia and would enable the transfer of goods traffic by road to the railway within a North - South axis and towards Navarra-Valle del Ebro. Furthermore, it would improve access to the international intermodal transport chain," pointed out the Basque Minister for the Environment and Territorial Policy.

"Furthermore," stressed Oregi in her contribution to the ministerial work, "its location in the Lezo-Gaintxurizketa area is the result of the complementary studies to the New Rail Network in the Basque Country that the Ministry for Development has conducted. Those studies advise fitting the cross-border goods network in the north-west area of Gipuzkoa, complementary to the new high speed network, and using the ensuing impetus and opportunities".

"The three logistic platforms (Jundiz-Foronda, Arasur and Lezo-Gaintxurizketa) offer great potential given their true multimodality, their strategic location in the Trans-European transport network and the optimisation of existing and available infrastructures" stressed Oregi.

The Basque Government Minister believes it to be "fundamental that those platforms are an essential part of a logistics optimisation strategy, as they are infrastructures that are already deployed or about to be completed and which will soon be underpinned by a key factor of the ilk of the New Rail Network. The Basque Government wishes to assure the Ministry for Development of our full collaboration and readiness to attain the greatest optimisation of those logistic platforms and their efficient contribution to goods haulage, both in the State, and for the whole Atlantic Rim and the Trans-European Transport Network".

With the contributions submitted this weekend by the different autonomous governments, the Ministry for Development will produce "an Optimisation Strategy, that will consider both regulatory aspects and those referring to the management of the services and the optimisation of the so-called "Spanish logistics map".

• In the area of transport, the Basque Government's Ministry for the Environment and Territorial Policy seeks to recover the potential of the BAC as a logistics platform for south-west Europe thanks to the complementarity of the ports of Bilbao and Pasajes, the logistics activity of Arasur, Lezo and Jundiz, promoting Foronda and Basque airports and the surrounding areas, the connections of the Basque new Rail Network and the use of the road connections to Madrid, Paris and the Mediterranean.

• "It is an initiative of this Department to drive the multimodal logistics hub consisting of Foronda-Jundiz-new Rail Network".