Proactive participation of the Basque Country in the European debate on creative and cultural industries and culture, and regional and local development 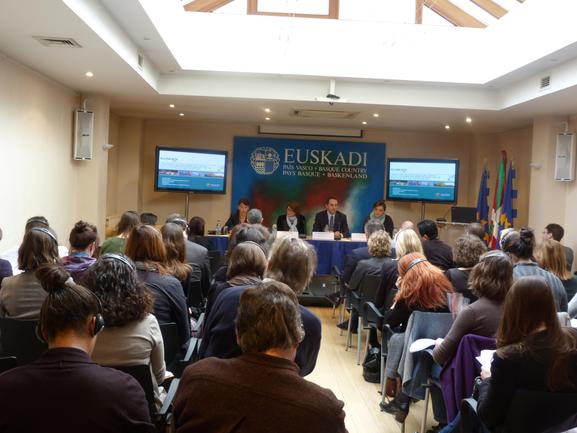 The European Union is committed to culture and creativity, as one of the sectors with the greatest potential to drive European growth. The Basque Government has held a European encounter in Brussels on the future "Creative Europe 2014-2020" European programme.

The Basque Government, with the involvement of European partners, has organised a European encounter in Brussels to defend culture, creativity and innovation, in the future actions and funding lines that will be brought together under the "Creative Europe 2014-2020" programme.

Under the aegis of the Basque Country Delegation to the European Union, a European discussion session was held in Brussels for representatives of the creative and cultural sector, European regions and institutions, European partners, in order to stress the role of regional and local authorities, and provide value added and specific aspects.

This initiative is part of a European proactive agenda and was also an opportunity for the Basque Government, through its Deputy Minister E. Hernáez, to unveil the initiatives of its Department aimed at fostering jobs for and an entrepreneurial spirit among young people.

The Basque Government work session in Brussels also included a work agenda involving the Director for Cultural Promotion of the Basque Government, Clara Montero, and the coordinator of the Antena MEDIA Euskadi (Basque Media Observatory), Ainhoa Gobierno, with the EU Audiovisual and Cultural Policy Directorates, in order to align priorities and strengthen synergies.

The hundred or so people present at the event had the opportunity to learn about the good practices cases, both by regional and local authorities, and by entrepreneurial initiatives, and which are currently at the heart of current discussion due to the negotiation period and in line with the imminent implementation of the European strategic programming for the coming 6 years.

This was stressed by the Basque Government representative to the hundred or so people at the event when he stressed "The European Union is committed to culture and creativity, as one of the sectors with greatest potential to drive European growth, and regional and local authorities cannot distance themselves from this debate".

The Deputy Director of the European Commission who took part in the session pointed out that "future EU initiatives seek to reduce the current fragmentation in the sector, along with consolidating access to funding by means of alternative initiatives, and fostering innovation and competitiveness, of the creative and cultural sector. This sector is a recognised employment and development niche, and the predominant role of the regional and local authorities is acknowledged".

It is noteworthy that cultural industries traditionally include the publishing, audiovisual (television, films, multimedia, etc.), dramatic arts, heritage, visual arts and craft sectors. The term creative industry involves a broader set of activities, where the product or service has a substantial creative or artistic element.

The value of culture and creative and cultural industries

During a short period of time, the creative and cultural industry has joined the sectors that make the greatest contribution to the economy: it current accounts for 4.5% of the GDP and 8.5 million jobs in the EU. The potential of the creative and cultural industries, and the value of culture, has been recognised in the proactive decisions adopted by the European Union, as it is recognised as a core area to achieve the agenda of priorities set in the EU2020 Strategy, as well as being a priority niche to cover the regions into speciality and development platforms.

The European Union is going to implement a specific programme in its new programming for 2014-2020 entitled the Creative Europe Programme. The Programme seeks to focus the endeavours to drive and consolidate the potential of the creative and cultural industries and the value of the culture.

One of the main innovations of Creative Europe will be the setting up of a bank funding scheme for the creative and cultural sector by means of a guarantee instrument.