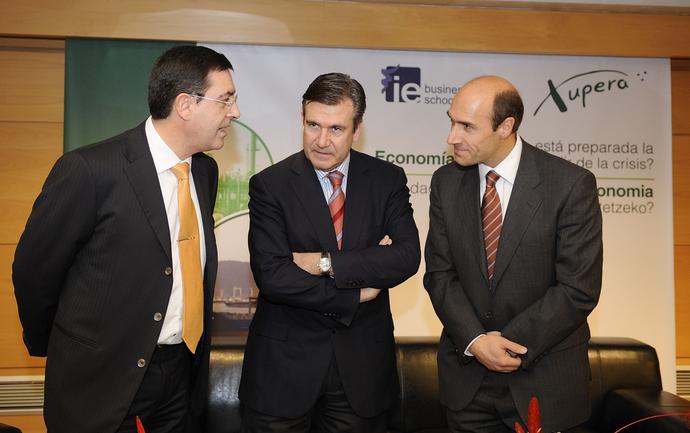 Bernabe Unda sees the current economic crisis as an "opportunity to establish a foothold in international markets" such as Russia, Brazil, India and China.

The Minister was taking part in a seminar entitled "What is the state of preparedness of the Basque Economy to get out of the financial crisis?". During the seminar, Unda underlined the importance of innovation in order to improve the competitiveness of Basque companies.

The Minister of Industry, Commerce, Innovation and Tourism, Bernabe Unda, saw the current crisis as an "opportunity". He declared that in order to get out of the current economic situation, "Basque companies must focus their attention" on countries that have not been affected by the economic crisis, such as Russia, Brazil, India and China.

The Minister was taking part in a roundtable entitled "What is the state of preparedness of the Basque Economy to get out of the financial crisis?", held at the Palacio Euskalduna in Bilbao and organised by Xupera and the Business School. In addition to the Minister, the seminar was attended by the President of Adegi, Eduardo Zubiaurre, the managing director of Euskaltel, Alberto García Erauskin and the President of Innobasque, Guillermo Ulacia. All the guest speakers took part in a debate on five aspects of the economic crisis in the Basque Country.

The first of the subjects tackled was the current situation. As the Minister pointed out, current indicators forecast a "slight increase in economic growth" over the next six months. Moreover, Unda was optimistic in his appraisal of the possibilities of the Basque Country to get out of the negative economic situation as he declared that "all economies end up by re-establishing themselves after a period of crisis".

The second matter dealt with at the roundtable concerned the lessons learnt from the economic situation at an economic and social level. The Industry Minister highlighted the "opportunities" afforded by the current situation in order to "concentrate on those countries that have not been affected by the crisis". According to Unda, examples of the countries to which Basque companies should pay special attention include Brazil, China, India and Russia.
Innovation was another of the subjects dealt with during the seminar, which was attended by a large number of businessmen and women. In the words of the Minister, innovation "is something that has to be fostered", not only in products, but also in "the dimensions of every company" and added that innovation must form an "obligatory part" of the work of governments and institutions.

The fourth subject discussed at the seminar was the dependence of the Basque market on the Spanish and international markets. In this sense, the head of the Industry Department of the Basque Government affirmed that Basque companies "must establish footholds in new markets within the framework of internationalisation". Likewise, he declared that "the Basque Country will not generate employment until Spain gets out of the crisis" and spoke of the importance of doing business on markets, such as Germany, that "are already seeing an end" to the negative economic situation.

Lastly, delegates concentrated on the relationship between politics, the crisis and changes in labour laws. The Minister, Bernabe Unda, supported the idea of reaching an agreement "acceptable to everyone involved" in order to resolve the problems that have arisen as a result of the crisis and concluded that "this is the moment for change and consensus in the Basque Country, both at a political and economic level; the key question is co-responsibility".