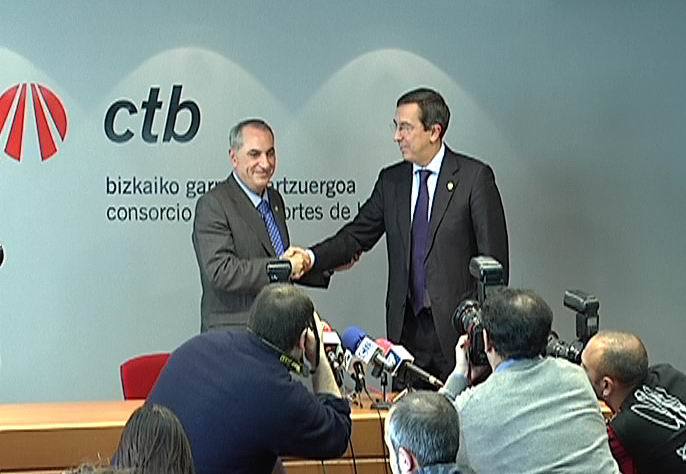 Download photo
Embed image
The Basque Government reaches an agreement with the Provincial Council to finance work on the Metro in Bizkaia Source: Irekia

The Transport Minister has expressed his "satisfaction" with the agreement reached, based on "loyalty and institutional responsibility".

A bridge loan will be secured in order "to cover the investment requirements" of the work on the Bilbao Metro. As the Minister explained, the surplus funds of the Transport Consortium itself will also be used.

The Basque Government and the Provincial Council of Bizkaia have reached an agreement on financing the construction of the Bilbao Metro. According to the Minister for Housing, Public Works and Transport, Iñaki Arriola, the agreement is based on "institutional loyalty". This agreement, described by the Minister as "important", will take the form of a bridge loan to "cover investment requirements" as well as the surplus funds of the Transport Consortium of Bizkaia, and the capacity for indebtedness of the public companies in which the Basque Government has a holding. In this way, the estimated cost of 127 million euros for the construction of the suburban train in the areas of Basauri, Santurtzi and Getxo will be covered.

The agreement also includes the "wish" of the Provincial Council of Vizcaya to increase its own capacity "should this be necessary".

Together with the President of the Provincial Council of Vizcaya, Jose Luis Bilbao, the Transport Minister, Iñaki Arriola, appeared this morning at a press conference to announce the budgetary and financial agreement reached for work on the Metro.

Both institutional representatives have expressed their satisfaction with the agreement and have appealed to the residents of the areas affected by the project to remain calm. Arriola declared that the work planned in the three municipalities will be carried out "as planned". The Minister emphasised the "priority" of the demands of our citizens over any "disagreements" there might be at a political level. For that reason he argued in favour of establishing a relationship of "confidence" and "collaboration" between both institutions.