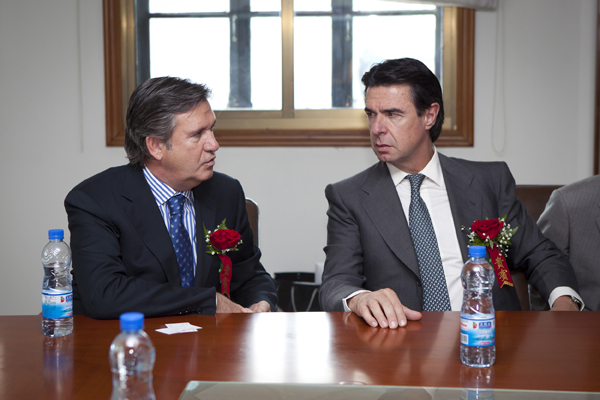 The Basque Government minister described Mondragón Corporación as "an example of multilocalisation, as its external strength enhances its performance in the Basque Country and in Spain".

The two cooperatives have jointly investment around 40 million euros to implement both projects, one of the largest industrial investments by a Spanish company to set up in China.

The two companies have set up in the Kunshan industrial park, whose 500,000 square metres are mainly occupied by cooperatives of the Mondragón group, and 200,000 of which are being promoted by the Basque Government among Basque companies. This first step towards the setting up of this large plot was in September 2010, when an agreement was signed between Minister Bernabé Unda (in his capacity as Chairman of SPRI, the public corporation) and the Kunshan Government. Yesterday, the Minister also visited Ormazabal, another Basque company on the same industrial estate.

Minister Bernabé Unda used the opening of the two plants to reflect on industrial policy. He pointed out that the Basque Country, with 4.6% of the Spanish population, accounts for 9% of its industry and that it is the autonomous community with the lowest unemployment rate, greatly thanks to the strength of its industrial sector.
He went on to stress the concept of multilocalisation and pointed out that Mondragón is a clear example of it. "It is the fifth Spanish industrial group and is a copybook example both at home and abroad. Its external strength enhances its performance in the Basque Country and in Spain," he explained.

He therefore believes that the opening of the group's two plants in Kunshan is an excellent opportunity to highlight the importance of Basque companies' facilities abroad. "I am delighted to be back here today and see that the fields that I visited a year ago along with the former Mondragón Chairman, José Mari Aldecoa, are now an industrial centre that is creating wealth and wellbeing for China and for the Basque Country," he stressed.

Unda then went on to recall how Aldecoa and he invited Minister José Manuel Soria - and this was subsequently reiterated by the new Chairman of the Group, Txema Gisasola-, to see for himself the multlocalisation example that the Basque cooperative group represents. "We urged the minister to come and learn about this venture and I would like to thank him for having done so, as I am convinced that backing companies as they expand abroad must be an industrial policy priority. Companies to look for growing markets and China is, undoubtedly, one of them".

The Kunshan industrial estate is "a project to facilitate our companies setting up in China, a project that is an example of cooperation and internationalisation". "China is a key country and therefore the possibility of working with its companies must be present in the strategic plans of our corporations," added Unda.

There are roughly 190 Basque company establishments in China, 39% of which are production facilities, 37.5% commercial, 22.8% from the service sector and 1% are related to training activities. It should be pointed out that the number of Basque companies is lower, as some companies have more than one venture establishment in the country.

By sectors, 32.6% are related to the mechanical equipment and machinery sector, 23.9% to trade and services, 14.6% to electronic and electrical equipment and material, 12.5% to metallurgy and metallic products, 8.15% transport material and 8.15% to other manufacturing industries.

By regions, the Basque venture establishments are mainly on the east coast of the country, a region that has witnessed huge development in recent years. Roughly 30% of Basque venture establishments are located in the Shanghai region, 22% in Jiangsu province and 16% in Beijing. The rest are mainly scattered between Hong Kong, Zhejiang, Guangdong, Tianjin, Shandong and Fujian.

Main products exported by the Basque Country to China in 2011

Main products imported by the Basque Country from China in 2011