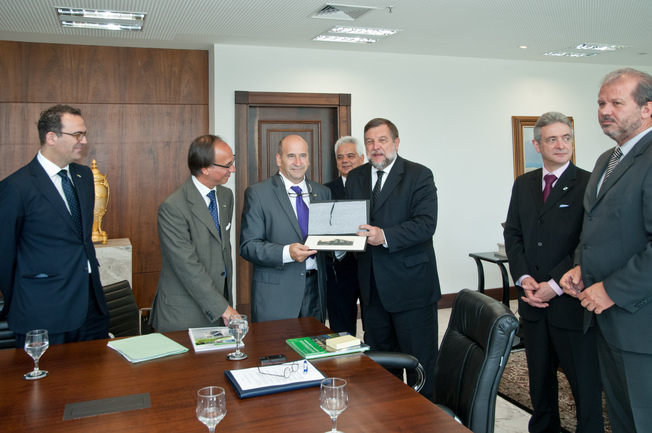 • - Representatives from the Basque Government and Iberdrola, Arteche and Ingeteam have travelled to the Paraná State to set up a smart grid pilot project in that Brazilian region. The project consists of incorporating state-of-the-art digital technologies and communication systems into the different elements of the grid (meters, transformation centres, electricity sub-stations). This will result in more detailed and accurate real-time information on consumption, network loads and any incidents.

• - Iberdrola implemented the project in the Basque Country this year and it is already up and running in Bilbao and Portugalete.

• - Last May, representatives of Paraná State (Brazil) expressed interest in the proven track record of the Basque Government in managing technology parks and developing smart grids.

Representatives of the Department of Industry, Innovation, Trade and Tourism, and Iberdrola, Arteche and Ingeteam visited Brazil last week in order to export a smart grid pilot project along the coastal area of the Paraná Region. Representatives of the SPRI Group, the set of public corporations of the Basque Government dedicated to helping the Basque business fabric, and of the Basque Energy Board were also in the country.

BIDELEK SAREAK, jointly set up by Iberdrola Distribución Eléctrica, S.A.U. and the Department for Industry, Innovation, Trade and Tourism through the Basque Energy Board (EVE) to deploy smart grids in Bilbao and Portugalete, was awarded the first orders for this project. Its improvements include being able to reduce incidents in the supply and savings for consumers, who may also access their consumption data in real time.

On 22 December 2010, Iberdrola and the Basque Government signed the Collaboration Protocol where they undertook to design and implement smart grids in the urban areas of Bilbao and Portugalete. Subsequently, in February 2011, Lehendakari Patxi López, the Basque Premier, and the Iberdrola CEO, Ignacio Galán, presided over the signing of the partnership agreement between Iberdrola and EVE to set up BIDELEK SAREAK, the entity that would make the investments to implement those smart grids.

The BIDELEK project involves a joint investment of 60 million euros over the coming 3 years and will be deployed in Bilbao and in Portugalete. It will involve adapting practically 1,100 transformation centres, where state-of-the-art electronic equipment is going to be fitted, and the replacement of over 230,000 meters that serve 410,000 inhabitants. A rural cutting-edge automation plan will also be deployed in the Lea-Artibai district by means of overhauling sub-stations.

Converting a grid into a smart one consists of incorporating state-of-the-art digital technologies and communication systems into the different elements of the grid (meters, transformation centres, electricity sub-stations). This will result in more detailed and accurate real-time information on consumption, network loads and any incidents.

Last May, representatives of Paraná State (Brazil) expressed interest in the proven track record of the Basque Government in managing technology parks and developing smart grids. The outcome of this interest is that the Basque Country is going to export its "know-how" to a region that is strategically located in the centre of the Mercosur (Southern Common Market), which is a trade bloc of the countries of Latin America, and is one of the areas with greatest technological development and electricity generation potential of Brazil.

The visit, lead by the Basque Government's Deputy Minister for Innovation and Technology, Juan Goicolea, has sought to further advance the implementation of the collaboration agreement to run a smart grid pilot project along the Paraná coastal area as part of the Paraná Smart Energy Programme, with the participation of Basque companies of the sector.

It comes under the collaboration agreement entered into last May between the Basque Government's Department for Industry, Innovation, Trade and Tourism, through SPRI, and the Paraná Government's Secretary for Science and Technology (Brazil), through the Paraná Institute for Technology (TECPAR).

The delegation was also welcomed by the Deputy Governor of Paraná State, who reiterated his government's commitment to the project. The visit has led to the setting up of a working group and the commitment for both parties to exchange technical and other important information both parties to prepare a feasibility study proposal to the Paraná Government which will mark the start to the project.