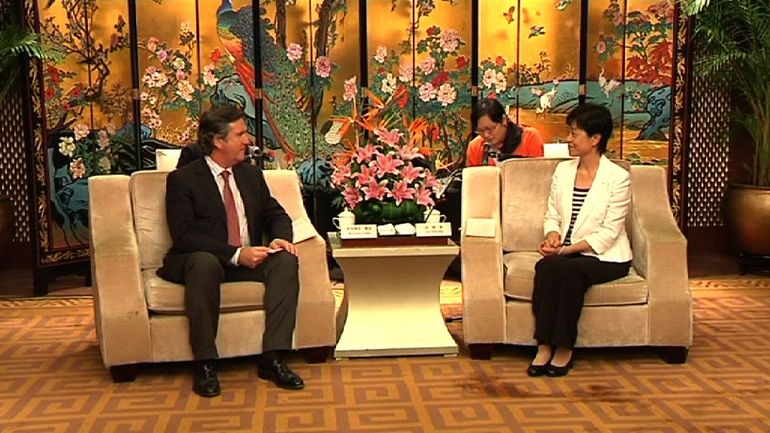 Training programme, involving 20 or 25 Basque trainees and a further 20 or 25 from Jiangsu.

The Jiangsu regional government has signed an environmental memorandum to consolidate relations between both territories over the coming five years.

Three Chinese companies will attend an environmental seminar organised by the SPRI and the Aclima cluster in Bilbao at the end of October, where projects will be showcased in which Basque companies could be involved.

Deusto Business School is promoting its MBA in China and is studying an agreement with the Nanjing University of Finance and Economics.

Work experience will be available for around 20 to 25 young Basques in the Jiangsu region of China and vice versa: a further 20 or 25 trainees from the Asian country will spend time in the Basque Country to improve their internationalisation know-how. That has been one of the main results of the meeting held today between Bernabé Unda, the Basque Government Minister for Industry, Innovation, Trade and Tourism, and the Deputy Governor of Jiangsu.

The Chinese authorities were particularly interested in the Global Training programme, implemented in the Basque Country this year with 530 grants for young Basques. One new feature compared to other similar grants is that they are not only open to university graduates, but also to university diploma holders and those who have completed Vocational Training.

Jiangsu and the Basque Country are already working on this proposal and they hope to be able to bring it to fruition in a memorandum containing all the details.
This and other agreements that Minister Unda is currently finalising are a specific development of the memorandum signed between the Jiangsu Government and the Basque Government in Vitoria-Gasteiz on 17 May 2012, which in turn was the outcome of the institutional and trade mission led by the Lehendakari, the Basque Premier, to China in October 2010.

The agreement is multidisciplinary and the areas of cooperation include business development, trade, energy, science and technology, the environment, agriculture, education, culture, tourism, employment and social affairs.

The Basque Government's Department for the Environment, Land Planning, Agriculture and Fisheries, and the Jiangsu Environmental Protection Department have also entered into a memorandum, by means of which both parties have decided to establish an environmental protection exchange. Specifically, it covers areas such as managing hazardous and solid waste, environmental management of water and control of contaminated water, environmental monitoring and climate change.

The partnership agreement seeks to forge a mechanism for dialogue and collaboration between the two regions, develop a system to share environmental information by means of new technologies, seminars and mutual visits, along with a commitment to be the driving force behind environmental research centres in Jiangsu and the Basque Country, between which direct cooperation and contact will be developed.

The agreement, previously signed by Basque Government Minister Pilar Unzalu, has been signed by the Chinese authorities today. It will be in force for five years.

Likewise in the environmental arena, Minister Bernabé Unda has received confirmation from Chinese business organisations that some of their members will travel to Bilbao at the end of October to attend a seminar organised by the SPRI and Aclima, the Basque environmental cluster.

During the first day of his trip to China, the Minister has visited the Jiangsu International Environmental Development Centre. Its representatives stressed that three Chinese companies from the sector will be taking part in the seminar.
The seminar aims to establish the situation of the environment sector in China, learn out the short- and medium-term projects of these three Asian companies to try to involve Basque companies in those projects, as well as to drive partnership and joint-venture agreements between Basque and Jiangsu companies.

Unda also visited some of the leading economic entities in the Nanjing area. His visit was thus ahead of the upcoming one by representatives of Deusto Business School, which has begun to promote its MBA in China. Specifically, an agreement with Nanjing University of Finance and Economics is on the table.